The Armistice that ended the First World War took effect at 11 a.m. on the eleventh day of the eleventh month of 1918. When the guns ceased ﬁring, the Canadian Corps was in Mons, Belgium, the city where the British had ﬁrst made contact with the invading Germans in August 1914.

There was something right about that symbolism. The units of the British Expeditionary Force (BEF) that faced the enemy that August fought gamely but unsuccessfully against the massive weight of the German advance. A long retreat began that forced the BEF westward. In 1918, however, the situation had totally reversed. The Canadian Corps, part of the BEF’s First Army, had used its great power to push the Germans to the east, forcing them out of their lines at Amiens in August, out of the Drocourt-Quéant Line near Arras at the beginning of September, and across the Canal du Nord at the end of that month. Then followed the liberation of Cambrai, the enemy’s key supply centre in northern France, the taking of the city of Valenciennes, and the German rout as they were chased out of France and into Belgium. The Canadian Corps’s Hundred Days had been extraordinary, a series of the greatest victories ever won in battle by Canadian troops.

These victories might well be classed as miraculous, considering where Canada’s army had been four years earlier. There was much enthusiasm among the 50,000 or so militiamen, but little real training, inadequate equipment and almost no staff-trained ofﬁcers. When the war broke out, Minister of Militia and Defence Sam Hughes scrapped a planned mobilization scheme for an improvised one that took some 35,000 volunteers to Valcartier, Que. There was no camp there, and chaos reigned supreme as one was built. Ofﬁcers were appointed based on whom they knew, and units were jerry-built by combining soldiers from two, three or more militia regiments. The organizational chaos Hughes created lasted through much of the war.

More striking still was the makeup of the First Contingent. The ofﬁcers were mainly Canadian-born, but some two-thirds of the soldiers were recent immigrants from Great Britain. There were relatively few Canadian-born soldiers and fewer still from French-speaking Canada. These ratios persisted throughout the war. Not until the last month of the war did the Canadian-born form a majority of the troops, thanks in substantial part to the conscription of 100,000 men in 1918 (francophone enlistment was at most only some 50,000 or so volunteers and conscripts out of the 620,000 Canadians who put on the uniform).

The First Canadian Division trained in Britain for a few months, then made its way to the trenches. In the Dominion’s previous conflicts in 1870, 1885 and during the South African War, casualties had been minimal. In the Great War, however, the dead, wounded and captured would be enormous. But the First Division was followed by a Second, a Third and a Fourth, and by late 1916, the Canadian Corps had fought in Belgium and on the Somme, and was starting to develop a reputation, ﬁrst under the leadership of British Lt.-Gen. Sir Julian Byng, and then under Canadian Arthur Currie in June 1917.

Fortunately spared from the brunt of the major German offensives from March to June 1918, Currie’s men learned to work with tanks to clear enemy machine-gun posts, and to use straﬁng Royal Air Force ﬁghters to pin down the enemy until infantry could round them up. Currie’s gunners also excelled at counter-battery work, locating enemy artillery positions and putting their guns out of action before they could interfere with Canadian attacks. In addition, Currie secured more guns, trucks, engineers and infantry for the Corps.

All this came together on Aug. 8, 1918, at Amiens. Moved south from Arras in great secrecy, the Canadians turned up suddenly in front of the enemy lines. At 4:20 a.m., Gunner Bertie Cox wrote later, “Every gun shot together, and the thing was off . . . After three hours I was practically deaf . . . By 5 a.m., the prisoners began to go by and this procession continued all day.” With the Australians, British and French on their flanks, the Corps followed the barrage and smashed through the German lines, making an extraordinary, eight-mile advance on the ﬁrst day of the assault. Artillery, tanks, aircraft, engineers and infantry worked together in a model all-arms attack. This was combined warfare fought in open country, exactly what the Canadians had been training for since May, “the best executed and best picked-out plan that was ever pulled off,” declared another soldier.

The attack depended on the skill and determination of the soldiers. But, as with almost every attack in the Great War, artillery was the god of battle. And Canadian industry was producing huge quantities of shells for the guns. Initially in 1914 and 1915, contracts to produce shells were made by Sam Hughes’s shell committee. As with everything Hughes touched, there was cronyism and patronage. Making artillery shells, a job requiring exacting tolerances and good workmanship, was no simple task. Too many of the shells produced were duds or defective, and in November 1915, London and Ottawa agreed to create the Imperial Munitions Board to set matters right in the Dominion. To run it, they turned to Joseph Flavelle, the Toronto pork-packing magnate and an apostle of efﬁciency. “Holy Joe,” as some called him, enforced high standards and maximized production, turning out 65 million shells across Canada and supplying up to one-third of all that the Imperial forces required. In addition, the IMB produced fuses, explosives, aircraft and naval vessels—in total $1.25 billion (or some $18 billion in current dollars) of munitions. Flavelle was knighted in 1917 for his extraordinary work with the IMB, but he suffered vicious attacks in the press because his pork-packing business, massively increasing its sales volume in supplying Great Britain, made big proﬁts during the war.

The Amiens attack continued for several days but eventually ground to a halt as the Germans brought up massive reinforcements. The victory at Amiens nonetheless shook the German High Command, its chief strategist, Gen. Erich Ludendorff, telling Kaiser Wilhelm that the war must be ended. Aug. 8, he said, was “the black day of the German army,” adding later that “everything I had feared . . . had here in one place become a reality . . . We have reached the limits of our capacity. The war must be terminated.” 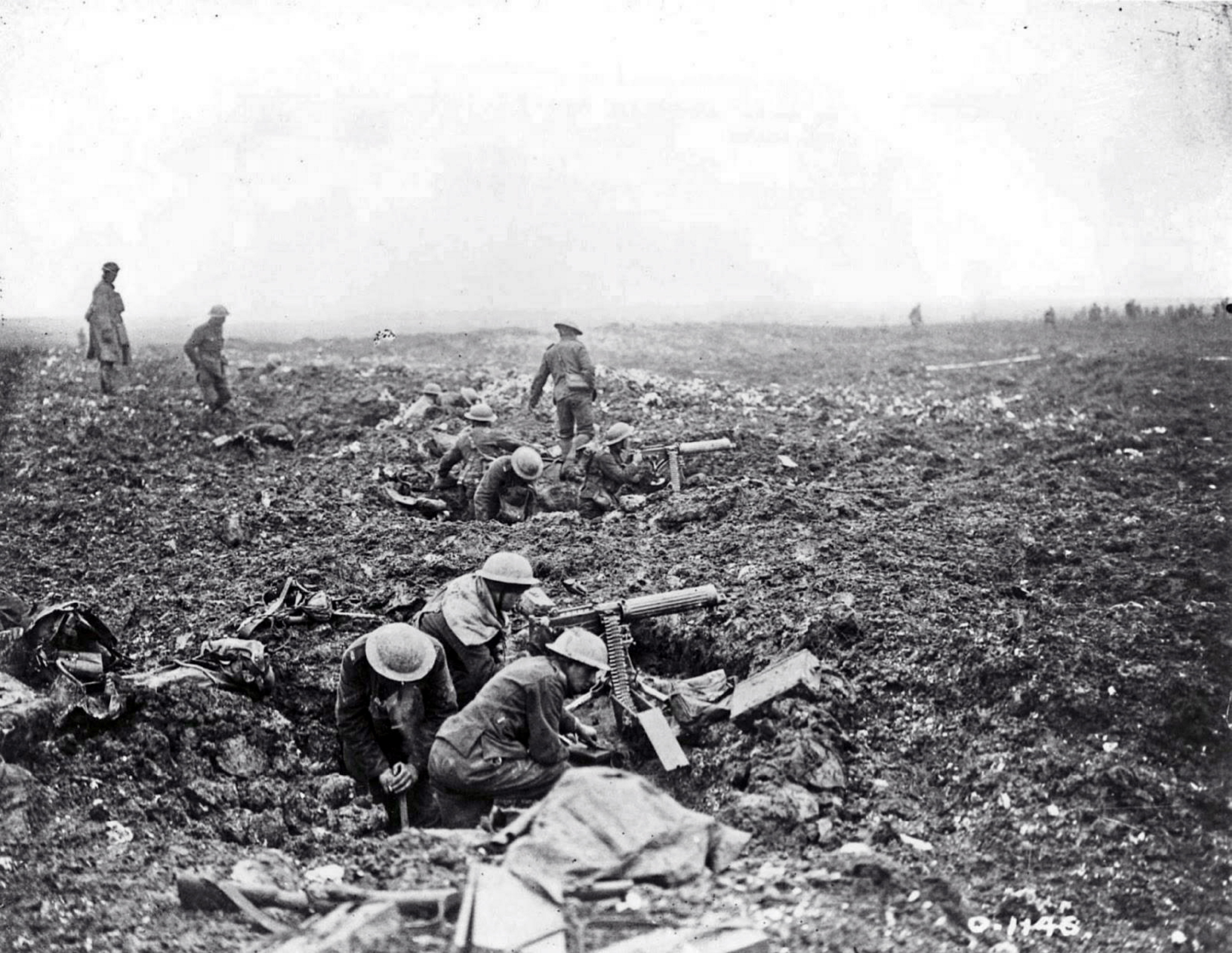 How Canada earned the world's respect

But not yet. With planning co-ordinated by Generalissimo Ferdinand Foch, the Allies now began a series of attacks along the Western Front. The Canadians’ next turn came up at the end of August on the Arras front. Their objective was to crack the Drocourt-Quéant Line. As with all enemy defensive barriers, there were concrete machine-gun posts, belts of wire, deep dugouts in the trenches, much artillery and many men, backed by reinforcements in front of the D-Q Line, and the Line itself was more formidable still.

The Canadian assault, alongside troops of the British First Army, began on Aug. 26 and lasted until Sept. 4. The Germans knew an attack was imminent, but Currie launched his offensive in the middle of the night, achieving surprise. The troops took their initial objectives, but the casualties mounted quickly: the 116th Battalion in the Third Division lost 300 ofﬁcers and men, killed or wounded in the ﬁrst two days of ﬁghting. The 22nd Battalion, the Canadian Corps’s one francophone battalion, had all its ofﬁcers killed or wounded, including Maj. Georges Vanier, later Canada’s governor general, who was hit in the stomach and lost his right leg. Currie called the ﬁghting in front of the D-Q Line “the hardest battle in [the Corps’s] history”; indeed, 960 men were killed on Sept. 1. The next stage was no easier, but by Sept. 4, the Line had been cracked and the Canadians had pushed the Germans behind the Canal du Nord, the enemy’s last ﬁxed line of defence before Cambrai, their key supply and transport hub in northern France.

The ﬁghting to reach and to break the D-Q Line had cost the Canadians more than 11,400 casualties, most coming from the infantry. The Corps had to rest and recuperate and bring up reinforcements to gets its battalions up to strength. There were men in England readying to come to France, and there were conscripts streaming in from Canada to be hurried through training. Conscription had been a hugely divisive question, bitterly opposed by farmers, organized labour and Québécois, but the December 1917 election had returned Sir Robert Borden and his conscriptionist coalition to power. The army called up men for training beginning in January 1918, and the ﬁrst conscripts reached France in May. There were riots and desertions in Canada, but the training continued, as did the transports carrying men overseas. By the Armistice, 24,132 conscripts had reached the front, enough men to provide 500 reinforcements for each of the 48 infantry battalions in the Canadian Corps. Without them, the Canadians could not have continued to ﬁght.

Continue they did. In late September, Currie’s troops crossed the Canal du Nord in a brilliantly planned attack, and by Oct. 9, after ﬁerce ﬁghting, they had liberated Cambrai. The ﬁghting had been difﬁcult, so much so that the young Brig.-Gen. J.A. Clark, commanding the 7th Brigade, later wrote: “Never have I felt so depressed as I felt after that battle. It seemed impossible to break the morale and ﬁghting spirit of the German troops.” The soldiers knew that the Germans were beaten and they knew that Berlin was trying to end the war, but the German infantry and machine gunners nonetheless fought tenaciously. After Cambrai, however, the enemy was in full retreat, and the Canadians began to roll eastward at some speed, units leapfrogging ahead, cavalry and armoured cars moving faster still. The Germans had been defeated in the ﬁeld, and Currie boasted that his troops had smashed one-quarter of the German army on the Western Front.

By Nov. 10, the Canadians were at Mons. Currie had orders to keep the pressure on the Germans, Marshal Foch and other Allied leaders fearing that the Germans would try to continue the war even as their emissaries parlayed for an armistice. The Canadians duly liberated the city, the burghers woken up by the skirling pipes of Montreal’s 42nd Battalion on Nov. 11. The Armistice came into effect at 11 a.m., a few minutes after the last Canadian, Pte. George Price, fell to a sniper’s bullet.

Canada’s war was over. The battles of the Hundred Days had resulted in 45,835 killed, wounded or taken prisoner, almost one-ﬁfth of the overall toll of 68,656 dead and 176,380 wounded. In all, 51,748 men were killed in action and 7,796 died of wounds or injury. Of the 423,600 men and women, the latter almost all Nursing Sisters who served overseas, only 345,000 made it to France or Belgium, the remainder posted in Britain or other theatres. The casualty rate of all those who fought was thus 71 per cent, and at least eight in 10 of all infantrymen were killed or wounded. The loss was enormous, and it was to be felt in Canada for generations.