96,000 fans show their love of baseball at Blue Jays games in Montreal

Crowds give hope to those dreaming of a return of Major League baseball to the city. 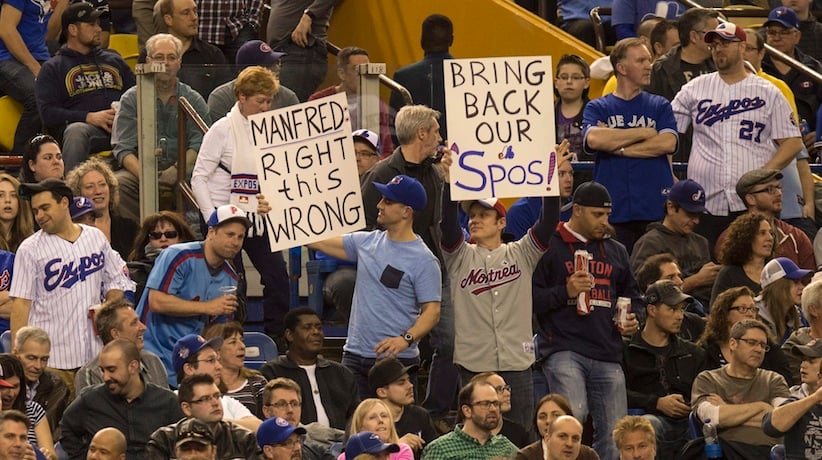 MONTREAL — It was mission accomplished for Montreal baseball advocates as over 96,000 fans came out for two Toronto Blue Jays exhibition games at Olympic Stadium.

The atmosphere during Saturday’s win was reminiscent of the Montreal Expos’ greatest triumphs and gave hope to those dreaming of a return of Major League baseball to the city. The Montreal Expos played their last game in 2004.

MLB officials have been pleasantly surprised by the response of Quebecers to this second series of Blue Jays exhibition games held at Olympic Stadium.

“These are impressive numbers,” said John McHale, senior vice president of MLB. “We thought that because of the Easter holiday and the novelty perhaps wearing off this year, there might have been fewer people for this year’s games. We wouldn’t even have thought that was bad.”

MLB’s new commissioner, Rob Manfred, said in the past week that Montreal had successfully passed the first test toward a return of baseball to the city: demonstrating great interest.

In other sports news: Rob Ford named to the board of the Hockey Hall of Fame

Earlier this week, he said the city would also need “a firm, committed-to plan” for a new stadium.

Montreal’s mayor Denis Coderre, who attended the game wearing an Expos hat, is just one of many Montreal baseball fans hoping to bring another team to the city.

McHale is expected to make a report on this weekend’s games to the league on Monday.

“We’ll hold a meeting and I can tell you that with the commissioner’s new team in place, many people are interested in reading the report,” he said.

McHale, who returned to New York before Saturday’s game, repeated that the League would not write off the idea of holding regular season games — either Blue Jays or another team — in Montreal in the near future.

“We’ve done it in the past,” McHale said. “Sadly, with the Expos, who played in San Juan, Puerto Rico.”

This would mean playing regular league games at Olympic Stadium.

Steve Rogers, the former Expos pitcher speaking on behalf of the MLB players’ association, said the event’s organizers did an exceptional job to prepare the surface and correct minor imperfections noted last year.

“I don’t see why they couldn’t do the extra improvement needed to meet all our standards,” he said. “Since it isn’t a permanent surface, there are a few imperfections that we wouldn’t want to see for games that counted in the standings, but they know it, it’s no mystery. I’m sure it wouldn’t be a problem.”