A beautiful cup, its Chinese imperial owner, and chickens

The best piece at a new exhibit at the Royal Ontario Museum is one of the smallest, and most beautiful 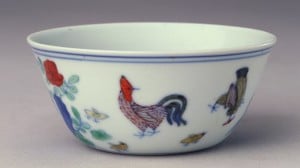 Chinese porcelain is so varied that everyone can find a style to admire. The Royal Ontario Museum’s current exhibition, “The Forbidden City: Inside the court of China’s emperors” has them all. There is the refined, plain appeal of Ru porcelain, the giddily ornate plates created for Emperor Tongzhi’s wedding, or the blue-and-white vase decorated with 10,000 variants of the character for longevity.

In the middle of the exhibit is sheer perfection, a tiny treasure not to be missed in a rush to see all the “big” pieces. Called the “chicken cup,” this piece is decorated with scenes of a rooster, hen and two chicks in a garden, and was created at the imperial kilns exclusively for the court of Emperor Chenghua (Ming dynasty, reign of 1465-1487). What sets it apart from all the other selections of imperial porcelain is its vivid, beautifully painted scenes—blink and the free-form chickens appear to be moving around the cup. All this on a cup that would fit comfortably in the palm of a woman’s hand. The colours are applied both over and under the glaze, which as the exhibition catalogue notes, “required firing the cup twice at different temperatures.” No wonder that fewer than a dozen survive worldwide.

The cup’s small size leaves it almost lost in its display case. So you might have to hunt a bit to gaze upon six-centuries-old chickens. But trust me, it will be well worth it.