A Fred Penner fan, all grown up 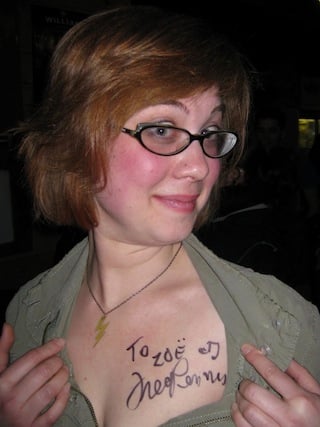 See also: Fred Penner came back, the very next decade

“Fred Penner is playing 8pm at Chainsaw this Friday.”

Not quite believing my eyes, I read over the text three times before responding: “What time are you picking me up?”

I am in my mid-thirties. I work at a music store and I’m a ukulele songwriter. My friends and I are more likely to be found going to see Gogol Bordello or dancing with wild abandon to Kidstreet than clapping along with a ‘children’s performer,’ but none of us questioned it. On instinct, we just said, yes, of course we’re going!

Fred was in town at one of the universities for a conference that weekend and apparently someone convinced him to play a gig at the Chainsaw in Uptown Waterloo. The Chainsaw is a bar on King Street known to be a bit rough around the edges. It is charming in its rawness, but more accustomed to hosting punk bands and drunken karaoke than children’s performers.

Nevertheless, on this particular Friday in March, the bar was packed with adults in their twenties and thirties, all there to see Fred Penner.

At the allotted time Fred climbed up on stage and we hooted and hollered our approval. He announced that it was an all-request show and we were encouraged to write down
songs we’d like to hear and toss the suggestions up on stage. He played whichever ones he liked and/or remembered the words to.

Some songs he played in their entirety, others he only played a verse or two. It was pure ear candy, and a trip down memory lane. We grinned our silly grins and loved every minute of it.

For the final numbers, Fred sang about sandwiches and the cat coming back. At the top of our lungs, we belted out the words along with him. We knew them all. Upon the final chord of The Cat Came Back the place exploded in cheers and applause.

After a few minutes of basking in the fantastic energy we’d just been a part of, my friends and I decided to go and meet this troubadour of our childhood. The line was long and we
waited about half an hour, most of which was spent rehashing the show and laughing at the frat boys who’d pulled on Fred Penner’s Place t-shirts over their sweaters.

As we drew nearer to the front of line, I began to think how funny it would be to get Fred to sign my chest. I’d never even considered getting my chest signed before, but for some
reason I kind of wanted him to! At last it was our turn. Fred was jovial and genuine with every person.

When he finally turned to me I brazenly asked if he would autograph my chest. He laughed and said, “Of course!” I bared my chest, he brandished his Sharpie,
asked me how to spell my name, and thus I was marked. I wondered: Was I the first person to acquire his signature in such an intimate spot? No, apparently not, though Fred said he’d only fielded the request about three times in his career. That’s a shortlist I’m proud to be on.

Yes, it’s true. Fred Penner is the only person ever to have signed my chest. Not Eugene Hutz, not Gene Simmons. Fred Penner was and still is our rock star.

Look out Raffi, you’re next.

See also: Fred Penner came back, the very next decade