When the author set out to hold a gigantic family reunion, he learned that being part of a clan is a complicated business 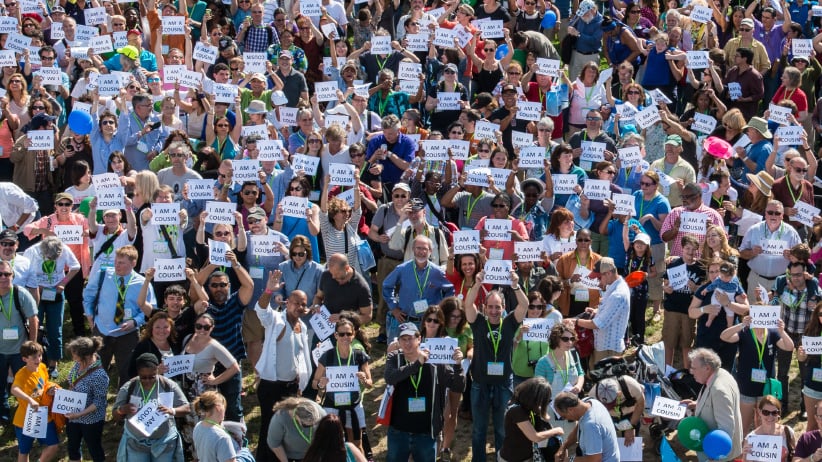 Looking back, there was a certain inevitability to New York writer A.J. Jacobs’s response to a 2013 email from Israel. Jacobs, a secular Jew, had spent a year literally following the tenets of the Bible for his 2007 book The Year of Living Biblically, which involved, among much else, blowing a shofar at the start of every month and wrestling with the demand he should stone adulterers. He had read all 32 volumes of the Encyclopædia Britannica for his 2004 title The Know-It-All, and thrown himself into the various ways humans can achieve peak physical health, from diet to exercise, for 2012’s Drop Dead Healthy—which eventually inspired a TED Talk entitled “How healthy living nearly killed me.” Whether Jacobs’s books, lighthearted in tone but serious in intent, are “immersive” reportage—the opinion of fans who have made them bestsellers—or “stunt” journalism, as his detractors insist, it’s clear their author is always ready to not just write about but also plunge into the next big idea.

Add to that the fact Jacobs, at bottom, is a buy-the-world-a-Coke-and-sing-in-harmony kind of guy. “All right, that’s a relatively fair comment,” says the cheerful author in an interview about his 2017 book, It’s All Relative: Adventures Up and Down the World’s Family Tree. (Aside, that is, from one caveat: “I don’t approve of Coke,” because of what he learned writing the health book.) So when Jules Feldman, a dairy farmer on an Israeli kibbutz, wrote Jacobs about a lifelong project, creating the largest family tree he could manage, lights went on in New York. Currently, Feldman said, he had some 80,000 relatives on his tree, which, given Jacobs’s place among them as Feldman’s wife’s eighth cousin, meant “80,000 relatives of yours.”

Jacobs was moved emotionally and, very quickly, excited professionally. “You could take the old cliché that we’re all one big family and for the first time ever prove it. I thought that was a wild idea, even if I don’t expect us all to burst into song and solve all wars and racism. But it’s a nice nudge in the right direction,” he says. Jacobs being Jacobs, the wild idea culminated in the Global Family Reunion in June 2015, an (ultimately unsuccessful) attempt to hold the largest family reunion in history. Among the attendees—and performers—at the event were Sister Sledge, whose greatest hit was the 1979 anthem We Are Family. Or, at least, three-quarters of the Sledge sisters came and sang, one of the four having gone her own way, standard family-squabble lawsuit included. Family, as the strong undercurrent to It’s All Relative’s all-smiles surface narrative suggests, is a complicated business.

It didn’t seem that way to Jacobs at first. “There’s such a big difference between feeling and knowing. Seeing an actual chart of the line between me and whoever, say, Barack Obama”—who turned out to be Jacobs’s fifth great-aunt’s husband’s brother’s wife’s seventh great-nephew—“makes it much more concrete. It was an amazing feeling to me, and I thought maybe it would be for other people, too. It’s like six degrees of Kevin Bacon, but we’re all Kevin Bacon.” Jacobs found the news about former president Obama—and President Abraham Lincoln (17th cousin by marriage), painter Jackson Pollock (14th cousin) and serial killer Jeffrey Dahmer (21st cousin, also, thankfully, by marriage)—through a massive internet project known as the World Family Tree (WFT).

Among the millions of North Americans currently spending some $4 billion a year collectively on genealogy, many are merging their family trees with others on Geni.com’s tree, which linked 70 million individual profiles when Jacobs first looked at it four years ago, and currently connects almost 117 million. Undisturbed by critics’ uncertainty over the accuracy of the WFT data, Jacobs took his own DNA test. He received a list of 1,009 presumed cousins, many listed as anonymous, and most third or fourth cousins. (Jacobs quickly mastered kin talk. The number in front of “cousin” indicates how many generations back to the last common ancestor; the number before “removed” denotes generational differences.)

Of the relatives who had volunteered their names, Jacobs recognized only his wife, who appeared as a seventh cousin, meaning their last common ancestor lived more than two centuries ago. Despite the friend who began humming the Dueling Banjos tune from Deliverance when he heard that news and the joking inquiries whether their children had two heads, that relational distance is close to standard. Some geneticists calculate everyone on the planet is no more than 70 generations apart from anyone else.

Everything now came together: Jacobs’s intuitive conviction, vicious sibling disputes notwithstanding, that humans treat known family better than strangers; the thousand unknown but potentially meetable cousins; the light-speed growth of the WFT links; and a barely constrained competitive streak. Jacobs would stage the world’s biggest family reunion, big enough—“I hoped for 5,000”—to merit a much-desired Guinness world record. He laboured on it for a year, sometimes heart in mouth, seeking venue space, sponsors and entertainment, all the time powered by positive thoughts (increasing the sum total of kindly feeling in the world) and dogged by negative feedback.

The big question circles around humanity’s inherent us vs. them nature, which Stanford biologist and neuroscientist Robert Sapolsky calls “the most damned discouraging fact about us as a species.” The strength of human dichotomizing can be seen in how quickly and unconsciously our brains process group differences—just a few hundred milliseconds to distinguish by race—and how early it emerges in children. Just how large a family are creatures like us capable of embracing? Surprisingly large, say the experts, including Sapolsky, who cites studies in which people who have automatic and negative reactions based on race when looking at pictures of faces can have those reactions reversed when the people in the photos are wearing baseball caps with the logo from the viewer’s team. “Then they instantaneously recategorize who’s an ‘us’ and who’s a ‘them’ and pay no attention to skin colour.”

READ: Jack Reacher, the ‘ethical thug’—Lee Child on creating his most famous character

Jacobs fervently agrees, and offers his own mix of academic opinion—a Harvard study showing that Israelis and Palestinians, informed of a reasonably close family relationship, were kinder to one another than study participants who had no such relationship—and personal experience. “I call it the Judge Judy effect. I always hated Judge Judy, found her obnoxious, nails-on-chalkboard irritating, until I saw the actual chart of how we are related [eighth cousins, twice removed]. That softened my heart into, ‘Oh, she’s not so bad, she just doing her Judge Judy shtick, maybe I should be a little more understanding, I’m sure she’s a sweetheart underneath.’ Nor was I born that way; I have naturally more of a Larry David mindset. So it’s a family thing.” Others, such as the invitee to the reunion who declined after Jacobs was unable to guarantee that 5,000 new cousins wouldn’t start dunning him for money, might agree that the newcomers were indeed family but still reject the notion of having obligations toward them.

And if Jacobs is optimistic about how large our hearts can grow, he’s positively enthusiastic about something that worries many geneticists and genealogists. They have always known that some solid proportion of humanity is, biologically speaking, mistaken about the man they call father. Estimates of false paternity range as high as 10 per cent, and none goes below two per cent, making it an issue both for the accuracy of family trees and the psychological well-being of the individuals involved. “This is going to be a huge issue as more and more people take DNA tests,” says Jacobs. “The world is going to be one big Maury Povich show, where they specialize in the surprise father. Hundreds of thousands of people are going to find out that their dads are not the ones they expected.”

Consider Michael, a man Jacobs interviewed for his book, whose identity he protects, one of nine siblings who discovered they were the offspring of eight different fathers. None of the fathers was the husband of their mother, the man they all thought was their dad and who was a loving parent to them. Michael is reasonably calm about the situation, Jacobs reports, but some of his siblings haven’t spoken to their mother since they found out. “It will be traumatic for some,” Jacobs allows, but it is emblematic of how complicated future family trees are liable to be. “Branches going every which way: the surprise father will be just the start of it. There’s increasing adoption and gay marriage; the U.K. just legalized three-people DNA for making a baby—50 years from now, people might have five parents.”

Amid philosophical quandaries and personal doubts, the planning and work went ahead. The Global Family Reunion was held—3,800 participants strong, so no Guinness record—talks were delivered, photos taken and hugs exchanged. And it is quite likely the sum total of the world’s kindly and familial feeling increased that day, however microscopically. Even so, there is still vast room to improve, and perhaps limits on our family-expanding capacity, as Jacobs himself demonstrated.

He expected about 50 close relatives to attend, of the sort everyone recognizes as kin—aunts, uncles, ﬁrst cousins—and he wanted a Jacobs tent as a refuge and meeting place for the elderly ones. One of his cousins responded that he was uneasy with a situation in which Jacobses alone among thousands had their own tent. Shocked at his own thoughtlessness, Jacobs accepted his cousin’s point immediately and made a mental note to not put the Jacobs name on the tent. “No need to rub it in the face of my fourth and seventh cousins.” But, after all, there’s family—and then there’s family.

FILED UNDER: A.J. Jacobs Editor's Picks genealogy It's All Relative: Adventures Up and Down the World's Family Tree The Vault The Year of Living Biblically World Family Tree