'A man should feel happy': An excerpt from 'The Orenda', by Joseph Boyden 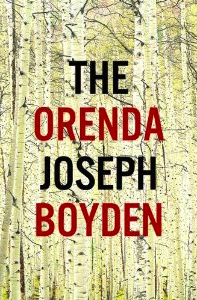 I stop to look up because the sun breaks, puffs of my breath shimmering in the first light. It’s you who shimmers, my love, in this first morning light. The sun will illuminate all of it. I know this most of all. The sun will show the Haudenosaunee who chase us exactly where to go, how many of us there are, what condition we’re in, and especially that we drag a crow with us. The sun today is not a friend. If we all die today, it will be because of it. And the sun won’t give true heat for three more moons, so it’s useless. The Crow who tries to follow is worse than useless. And the girl. Taking her was a bad idea. I knew this yesterday like I know it now. I’m older, my love, but still haven’t learned to listen to what my chest tells me.

I ask Fox to set a sinew snare where the path narrows, just high enough to strangle the first of their dogs, now howling across the lake and not so far away. With any luck, the others will be hungry enough to stop and tear apart their friend, for surely they’ve not been eating much this last while. I dreamed all of this and spoke of it as the sky began to darken last evening. I know, my love, that yesterday you watched from somewhere above when my group stumbled across the smaller party of our enemy, both pursuing the same deer. Luck and the bit of tobacco I’d offered to Aataentsic the Sky Woman the night before allowed me to find our enemy’s tracks first, and we followed nimble and fast. By the drag of the Haudenosaunee’s snowshoes I knew they were close to starving. And by the lack of dog prints I knew what their last meal had been.

I tied the Crow to a tree and then attacked the hunting party when we found them in a gully. It was almost too easy. We shot arrows through two and the other two could barely put up a fight. They didn’t even seem to care when Fox clubbed down one of the women, who at least bit him hard through his hide. I myself walked up to the biggest man, already singing his death song, and swung my thorn club into his temple, angry he wasn’t willing to fight for his woman. I will not forget having to stand on his head to wrench my weapon free. Yes, I’m older, but still strong. The only one as tall as me is that Crow who I can now hear stumbling through the snow and whining, trying to catch up. He’s big, thick through the chest and clearly strong, but is he not the most awkward man I’ve ever met? He is a holy one, though. I’ve watched him pray to his sky people for long stretches at a time, thumbing wooden and white metal beads that I think I want to possess once I understand their power.

I took no pleasure yesterday in killing the last two women. They were already so wounded we knew they wouldn’t survive the trip home. Even though I asked Fox to do it, my asking is the same as if I myself had done it. Fox cut their throats with his knife so that they’d die quickly, ignoring the taunts of Sturgeon and Hawk and Deer to make it slow. When the three called Fox a woman for making the first leave so fast, he positioned the second woman, who was quite pretty, so the blood from her throat sprayed their faces. That shut them up, and despite feeling badly for these dead, I laughed. For all I knew, it was this group who was responsible for the slow and awful deaths of you, my wife, and you, my two daughters. There’s been no peace since. I no longer care for peace.

As we gathered the few Haudenosaunee possessions worth taking, I caught the sound of a sniffle behind me in a clump of cedar. I didn’t turn immediately, for I was too tired to have to chase what was clearly a child through the forest. Fox looked at me and then walked away and around behind the cedar, circling it in a wide arc and cutting off the child’s escape. He emerged with the girl in his arms, her body as straight and stiff as if she were frozen solid. She stared ahead with eyes that didn’t seem to see but maybe saw everything. Was it this that stopped me from killing her, allowing Fox to suggest that I take her and make her my own child? Despite the pock scars from an old sickness, she’s beautiful, and will only become more so in the next few years.

We shouldn’t have followed our own tracks back out. This certainty of direction gives away too much to an enemy who’s quick to learn. By late last night, a much bigger group of Haudenosaunee had found the killing grounds and were following us. It’s not that I could hear or see them. The cold air took on another quality, though, and the hair at the back of my neck had begun to stick out, something tickling me like blackflies buzzing my ears, waking me from an afternoon slumber. That’s when I hurried my pace last night and my hunters knew then, too, what we all now faced.

Despite her slowing us down all night and as her people pursue us this morning, I still don’t regret taking her. She contains something powerful. This has become more and more clear in the last while. I’m willing to take this great risk because of the promise of what’s inside her. And if the Crow is able to not only keep up with my hunters but also keep the girl alive, he will have proved to me that both of them have something worth studying.

Now that the Crow appears through the trees, the girl in his large arms, I decide to push forward. It’s a good plan. If the Haudenosaunee catch up, they’ll find the Crow first, and when they see their child in his arms they’ll celebrate her survival with a feast that ends in the consumption of the Crow. Yes, they’ll immediately send a much smaller party to pursue the rest of us, but these odds are better than what we now stare at. I point out the snare to the Crow as he stumbles up, breathing heavily.

When he sits in the snow, the young girl stiff again with her eyes staring straight ahead, my men and I stand. The Crow’s confused expression fast turns to anger, and I like this sign very much. He has energy left and maybe he will make it through today after all. My four hunters and I walk to where I see a sharp drop to a creek below. Crouching and leaning back, I slide down the hill on the heels of my snowshoes, and feel like I’m flying as I pick up speed to where the creek will offer us a much faster route. I feel happy. A man should feel happy on the day that will be his last.

Read our interview with Joseph Boyden on The Orenda and his work on the final volume of a celebrated trilogy-in-progress.

FILED UNDER: Joseph Boyden The Orenda