Why meteorologists keep putting themselves at the eye of the storm

Anne Kingston: It's human instinct to turn to figureheads in times of crises. As the storms rage, action-figure scientists are filling the void 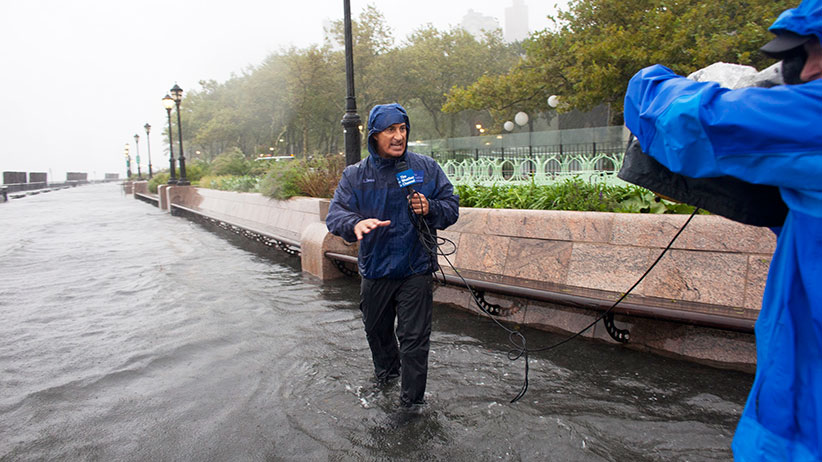 Before Hurricane Harvey inundated Texas, or Hurricane Irma ripped through the Caribbean and savaged Florida—and as Hurricane Maria wracks damage on Puerto Rico and the Virgin Islands with unexpected velocity—only a limited audience had heard of Steve Lyons or Jim Cantore or Ryan Maue or Jörg Kachelmann. Today, they and their fellow meteorologists have become household names, as well as founding members a new celebrity caste: the “star meteorologist.” That was the label attached to storm tracker Cantore by the New York Times. Tampa Bay News referred to him with even more gush as as a “rock-star weatherman” in  “If rock star weatherman Jim Cantore comes to Florida for Irma, we know it’s serious.”

Famous meteorologists are not a new phenomenon; they’ve been around since the mid-18th century; the occupation predates it’s naming. But at a moment in which the faux, trumped-up drama of reality TV can no longer compete with the literal Trumped-up drama of actual reality, there’s decided logic to scientists trained to decipher devastation taking centre stage.

The historic, terrifying Harvey and Irma, and now Maria, impart a new relevance to the Weather Channel and its on-camera staff, among them Steve Lyons, an expert in both tropical and marine meteorology. Nielsen numbers show the channel averaged nearly 1.3 million primetime viewers as the hurricanes approached, up from an average of 150,000 in the last week of July, when weather wasn’t a story.

The new crop of PhD-bearing meteorologists have nothing in common with last century’s affable TV weathermen (they invariably were men), like NBC’s Al Roker. These were guys armed with a piece of chalk, standing beside a map, as they cheerfully identified mild storm fronts and forecast weekend weather. The new celebrity meteorologists (most still are men) are action-figure scientists, enduring storm-gale winds as they decipher dystopian weather patterns.

Already media is framing them as warriors working for the public good. “I’m a meteorologist. I’m staying behind in the Florida Keys to help save lives,” was the title of a first-person account by William South, the tropical weather program manager and social media manager at the National Weather Service office in Key West, Fla., published in the Washington Post. “Meteorologists come to work with the goal of saving lives,” Nora Zimmett, senior vice president of programming for the Weather Channel, told the New York Times. “It sounds sappy, but it’s true.”

That’s not to discount other factors at play, including a cultural reflex to transform even eye-brow groomers into superstars. It’s also human instinct to seek figureheads in times of crisis. We saw it 20 years ago, after 9/11 shocked North America into the realization that grand-scale terrorism didn’t only happen elsewhere, to other people. Bookish, reassuring CNN anchor Aaron Brown emerged as an unlikely star. In 2005, when Hurricane Katrina provided a glimpse of U.S. government’s lack of preparedness for the extreme weather that routinely kills thousands in less-fortunate parts of the world, Anderson Cooper was catapulted into stardom—the result of his insistent questioning of authority. More than a decade later, Maue, a PhD associated with the Cato Institute, whose Twitter pic showcases chiseled cheekbones and biceps, is amassing a similar status as the go-to celeb-weatherperson of the right. It’s only a matter of time before meteorologists show up as the archetypal rom-com boyfriend, the way the architect once was. Whether universities will see an increase in enrolment for the rigorous coursework remains to be seen.

We do know that meteorologists are emerging as controversial front-line educators for climate change. On Tuesday, Maue tweeted: “Equally damaging to science literacy is baseless climate change denial that fails to advance knowledge or policy. It’s also bad for business.” Weather Channel executives admit they’re wary of alienating their right-leaning audience by even uttering the phrase “man-made global warning.” Occasionally, however, the channel ventures into politics, as seen in March when one of its meteorologists took to the air to counter Scott Pruitt, the administrator of the Environmental Protection Agency, who had said that he didn’t believe carbon dioxide was the leading cause of global warming.

On Tuesday afternoon, after Hurricane Maria had levelled Dominica and was hurtling toward Puerto Rico, where Governor Ricardo Russell declared it “the biggest and potentially most catastrophic hurricane to hit Puerto Rico in a century,” Maue was busy on social media posting overhead shots and trying to make sense of it:  “However, once #Maria reaches 30°N latitude —uncertainty increases — expected with forecasts > 5-7 days,” he tweeted. It serves as a sobering reminder that meteorologists may be the latest celebrities, as well as vital scientific story-tellers, but not even they fully understand how that story is unfolding—or how it ends.