Amazing Race Canada recap: Drama in the City of Love

Finally, everything an Amazing Race episode should have: U-Turns, betrayal, comedy, and romance 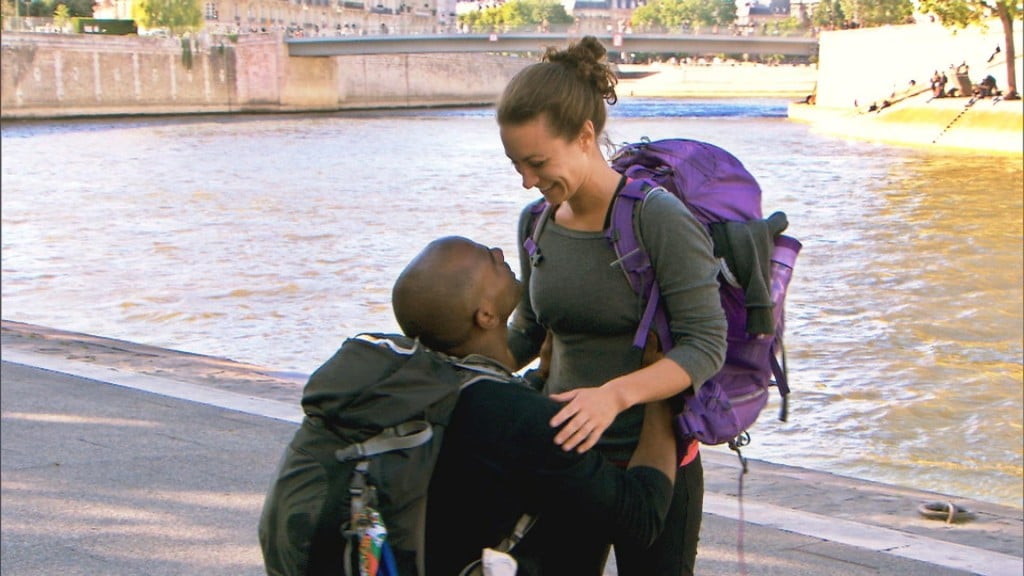 This week, The Amazing Race Canada deserves nothing less than a Jon Montgomery-esque pun: Its Parisian storyline was an Arc de Triomphe.

Let’s get the boring stuff out of the way: Natalie and Meaghan won this leg, because that is what they do. I can’t really explain how they’ve now won six of the eight legs—they are simply better, faster, stronger and luckier with their cab drivers. At this point, it only seems fair for the Olympians to win it all—they’ve earned it—but it would also be the least interesting outcome.

That’s still a few weeks away though, so let’s back it up. The six remaining teams raced from Normandy to Paris on Tuesday night, and everything that you hoped would happen in France—language barriers, a broken alliance, a U-Turn, a huge upset, and a romantic surprise—finally did.

As they waited for the train to the City of Love, Alain and Audrey approached the other francophone team, twins Pierre and Michel, about forming an alliance not to U-Turn—that is, force the other team to go back and complete both challenges on the Detour instead of just one—each other.

Pierre and Michel quickly agreed: “If we kick out some Quebec team, we’re gonna look stupid.”

But, minutes later, alone on the train, the twins laughed that they would, in fact, U-Turn the couple because, without offering a reason why, they don’t find Audrey trustworthy. Dra-ma!

U-turns are a controversial element of the race, with teams such as Pierre and Michel arguing they’re part of the game, and teams such as Natalie and Meaghan choosing not to use one when given the chance, because they want to run a “clean” race. (Well, it’s easy to play nice when you’re already beating the pants off everyone else.)

When the Double U-Turn board emerged last night for the first time this season, Pierre and Michel indeed used it against Audrey and Alain, and Sukhi and Jinder used it to turn back Ryan and Rob, who screamed, “I hate them!”

(You have to remember there’s a lifestyle supply of gas at stake.)

The best Amazing Race episodes manage to intertwine the high-stakes race drama with some comedy and, for that reason, the producers probably couldn’t be happier that they cast Sukhi and Jinder, the team everyone loves to hate.

When their train pulled into Paris, the siblings hopped into a cab, with Sukhi demanding to be taken to the Parc de Triomphe, “rapido, rapido”—beautifully oblivious to the fact that she was not speaking French.

Tasked with ordering and delivering lunch en français, Sukhi asked for uno coffee, darted through traffic yelling excusi! and responded to the patron’s merci with a “no problemo.”

I’m not going to pretend Canada is the bilingual paradise that Pierre Trudeau imagined. But Sukhi, who hails from northern B.C., has apparently managed to go her whole life without reading a yogurt container.

Butchering French this badly might be enough to get you fired from a federal government job, but Sukhi and Jinder fought through and actually finished in second place, their best yet.

Some external factors helped: Two other teams were U-Turned, and Muskoka bros Mickey and Pete took a taxi to Place des Canada—when they meant to go to Place du Canada. Two little letters took them to a different city, which they started to suspect when the metre ran over 100 euros.

This week’s drama peaked at the Roadblock, when one member of each team had to recreate a piece of art using Mentos. It was a brutally time-consuming task, with only Natalie finishing in a quick 90 minutes (HOW DOES SHE DO IT???). As the earlier teams went into their third hour, the later teams caught up, until everyone was there together: the U-Turned and the U-Turners.

Despite arriving second, Michel fell way behind, with Sukhi, Pete and Audrey finishing ahead of him. While Pete and Audrey joined forces to help get their Mentos in exactly the right place, Michel had no one to turn to for assistance, because he had alienated everyone over the course of the race. (Amazing Race Canada Life Lesson no. 180.)

Eventually, even Rob—who had been U-Turned and forced to complete a Speed Bump—overtook Michel, who was, by then, into his eighth hour of painstakingly rearranging his Mentos.

Much like Nicole, Michel bravely saw the task through. But, unlike with Cormac and Nicole, I don’t think viewers welled up when they heard Jon Montgomery tell Pierre and Michel they had been eliminated from the race.

The twins’ rivals, Alain and Audrey, really got the last laugh on Tuesday night when they turned their fourth-place finish into an Amazing Race Canada first: a proposal.

Alain got down on one knee, Audrey said yes, and Hello! Canada will no doubt ask to cover the wedding, because have you seen how attractive these two are?

Next week, the five remaining teams return to home soil: Montreal. Without Pierre and Michel, it’s hard to see anyone but the Olympians taking gold (again).