High stakes and a truckload of lentils in Saskatchewan 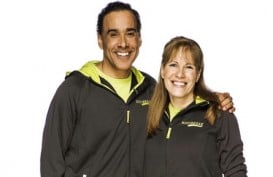 The laws of time, space and justice were bent last night, resulting in the elimination of Hal Johnson and Joanne McLeod from The Amazing Race Canada.

The official cause of Body Break’s downfall? Being too damn good.

This week, the six remaining teams flew from Whitehorse to Regina, where the race devolved into a sort of anti-tourism ad for Saskatchewan. There’s no way around it: trying to follow the North on The Amazing Race is like trying to follow Jennifer Lawrence at the Oscars. You’re going to let people down. Compounding that problem, the challenges in the Saskatchewan leg were far more tedious and grueling than anything the contestants had previously faced, creating an episode that left you at once exhausted and embittered.

The “negative fun” started when the teams were dropped into truckloads of lentils in the blazing hot sun at the Saskcan Pulse Trading Company. The task was to find two toys hidden somewhere inside the load to reveal the next clue, needle-in-a-haystack style. The lentil digging was hot, dirty, frustrating, muscle-cramping, and two of the strongest teams — Hal and Joanne, and married doctors Holly and Brett — ended up forgoing the challenge and taking a two-hour penalty just so they could move on.

This set the stakes very, very high: from that moment, one of the top two teams was going to be eliminated in Regina. I wouldn’t do this for Holly and Brett, but in honour of Team Body Break: I hereby renounce all lentils and other pod vegetables. Forever.

When CTV announced Hal and Joanne as Amazing Race Canada contestants, it was hard to tell whether it was just a gimmick (in the mutual interest of both parties) or whether the fitness icons would hold their own against much younger competitors and prove they deserved their spots in the race. At every challenge — physical and mental — they blew away the competition.

“They’re the biggest threat,” first-place teammates Jet and Dave agreed at the Whitehorse airport. “When I don’t see them, I get nervous.”

Their nervousness was well-placed: at that exact moment, Hal was on the phone with Air Canada, trying to score an earlier flight to Regina. He eventually succeeded.

The move that Team Body Break couldn’t bounce back from in Regina is that father-son team Tim Sr. and Tim Jr. used the “U-Turn” to force them to complete an additional task before crossing the finish line. Joanne was already nursing an injured leg.

“Hal and Joanne are fantastic … but they’re also very strong competitions and if you see a weakness, you have to take it,” Tim Jr. said.

Team TimTim finished last two weeks ago, but it was a non-elimination round. No such luck for Hal and Joanne.

From the get-go, Team Body Break obviously had — as a popular refrain of contestants on the show goes — targets on their backs. It wasn’t just their Canadian celebrity status. They kept finishing in the top three. They betrayed no weakness. The toughest criticism anyone came up with was Vanessa, who said she thought their smiles were fake.

Hal and Joanne tried to recover from TimTim’s move, using a second available “U-Turn” on the doctors, but somehow — and here is where time and space were bent — the doctors managed to complete the additional physical challenge on the Saskatchewan Roughriders field ahead of the Body Break team.

“We just beat Hal Johnson and Joanne McLeod at sports,” Brett said, in a state of shock.

Hal and Joanne were not, in the end, unbeatable. But I take issue with Vanessa’s suggestion that there’s anything fake about the fitness icons. On reality television, it’s much easier to look nasty when you’re actually nice than vice versa. If producers have enough footage to portray you a jerk, rest assured they’ll go that route. Hal and Joanne never looked like jerks. If anything, they weren’t sneaky enough — maybe they should have tried to hid their abilities from the other teams. They were too strategic, too successful, they kept showing up on earlier flights with wide grins. Approaching the finish line last in Regina, the looks on their faces showed pure misery. They’d been in this to win it. They’d been having a ball. That’s why they were smiling so much.

The couple were clearly stung in their post-game interview, but Joanne told the cameras that, “I think we’ll continue to keep fit and have fun until we’re six feet under.”

This, fellow viewers, is where we’ll have to find our comfort. Until next time — well, you know what to do.