A roundup of December new releases from Amazon Prime Video 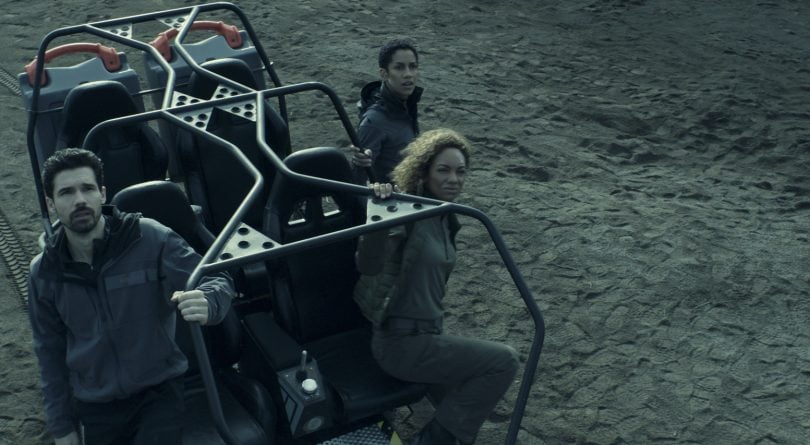 This is the first of our monthly roundups for Amazon Prime Video, similar to the one we do for Netflix, but shorter. Amazon in December has five new releases: two new feature films, and three new seasons of existing shows. It’s actually possible to watch all the new material of Amazon or Disney+ in a month. It’s not possible with Netflix, because their brand has always been built on offering more than any individual could consume.

As a Netflix competitor, Amazon is a bit different from some of the other streaming services. Not only has it been around longer, but it hasn’t tried to do as many different types of programming, and it hasn’t usually made shows that aim for broad popularity.   It uses original content as a  “brand enhancer” (coined by HBO executives), which helps bring prestige to the company as a whole. Amazon often approaches established creators like Amy Sherman-Palladino (Gilmore Girls) and offers them all the money they want to make shows their way. This doesn’t always work out, but it means that Amazon shows are to be judged by the awards and cachet they bring, not so much by the number of people watching them.

Amazon’s lineup of licensed content—movies and shows that have already appeared somewhere else—is similarly smaller than Netflix’s, and seems a little bit more skewed toward movies with a cult following rather than the very biggest hits. This month’s films include the first two movies from one of the defining cult franchises of the decade, the John Wick series, offbeat hits like Gnomeo and Juliet, and the Christmas cult movie Bad Santa to offset the more traditional Christmas content.

Created by Karan Anshuman (whose other Amazon series, Mirzapur, will release its second season next year), this series focuses on behind-the-scenes drama with the Mumbai Mavericks, a cricket team in a fictionalized version of the Indian Premier League. This season, appearing more than two years after the first season came out, brings back most of the regular cast and also introduces Aamir Bashir as Bhaisahab, a mysterious and powerful character who was often spoken to but never seen in the first season; Amazon says that Mavericks co-owner Zarina (Richa Chadda) will make an alliance with him.

This hour-long comedy-drama, a period piece about a woman trying to make it in the man’s world of 1950s comedy, is probably Amazon’s flagship series at the moment, exemplifying its image as a creator of entertainment with a progressive (but not too preachy) streak. Written mostly by Amy Sherman-Palladino and Daniel Palladino, it has already won Emmy Awards for the category of outstanding comedy series and for the outstanding performances of its actors, Rachel Brosnahan and Tony Shalhoub. This season, as the ‘50s give way to the ‘60s, the title character goes on tour, allowing the lavishly budgeted show to visit more locations in meticulous period reconstructions.

Mindy Kaling wrote, produced and co-starred in this film (directed by Nisha Ganatra), a Shavian “comedy of ideas” about the need for more diverse voices in comedy, starring Emma Thompson as a late-night talk show host and Kaling as a young writer who joins Thompson’s mostly male, mostly white staff. The film premiered at the Sundance Film Festival in 2019, and Amazon paid $13 million for the rights to release it to theatres and then on the streaming service. Variety reported that Amazon spent $33 million to promote the film, which made far less than that in its theatrical run. It may be that its relatively small-scale plot will find a bigger audience in the streaming world, but it helps explain why Netflix has been reluctant to bankroll traditional theatrical runs for its own films.

A science-fiction series, based on the books by James S.A. Corey, about a new Cold War that follows human colonization of outer space. Think of it as a darker, more cynical take on Star Trek. This season follows the crew of a starship as they explore a planet that is similar to earth, much like Star Trek crews, but get into situations that are more morally ambiguous than the crew of the Enterprise used to face. It’s making its Amazon debut after three seasons on the Syfy channel. After it was cancelled, Amazon picked it up, and has already announced that a fifth season is coming.

This feature film is being given a more Netflix-style release: a short theatrical run in December to qualify for awards, and then a wide release on Amazon. Directed by Tom Harper (Wild Rose) and written by Jack Thorne (Harry Potter and the Cursed Child), it’s a twist on the “true story” format that streaming services are so fond of. It’s based on a famous 1862 gas balloon flight by two Englishmen: one of them is in the movie (played by Eddie Redmayne), but the other has been replaced by a female character (played by Felicity Jones), to make the film partly historical, and partly an aspirational story of what history could have been.