A diary of the shocking season finale 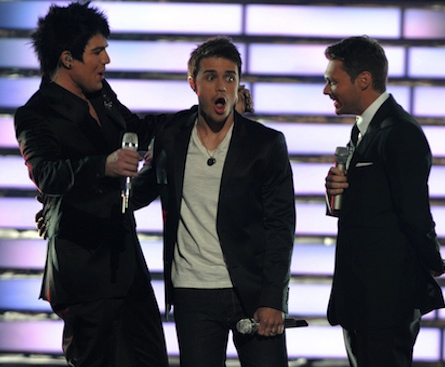 Having made it through an hour last night, we’re back for two more. It’s the American Idol season finale. And only the very soul of the last global empire hangs in the balance.

8:00pm. And we’re off. Cue the dramatic opening montage. “The final battle… the biggest moment of their lives… their lives have been changed forever.” You know, on that last point, the same could be said of almost everything that happens to you everyday. Think about it.

8:02pm. Ryan Seacrest says phone lines were jammed last night, but still just under 100-million votes were registered. Apparently this is some sort of record. The American dream is alive and well.

8:06pm. Ryan introduces “the two guys who have captured the hearts of the nation.” It is, at this point, necessary to report that last night’s finale was the lowest rated in Idol history.

8:07pm. Both of the finalists are wearing white in preparation for Puff Daddy’s after party.

8:20pm. Seacrest segues seamlessly from that to a mock awards ceremony for all the socially awkward losers who tried out thinking they could sing only to find themselves mocked mercilessly and repeatedly on national television.

8:23pm. The guy in the sparkly shirt who was basically a comedian would’ve ended up in the final four of an average season of Canadian Idol.

8:25pm. Queen Latifah out to perform with also-ran Lil Rounds. Queen Latifah has quietly put together an amazing career. All while calling herself—and convincing other people to call her—Queen Latifah. Easily the most distinguished alumnus of House Party 2.

8:32pm. Another commercial break. We’ve had three or four of these now and not a single Conservative attack ad. Disappointing.

8:33pm. A couple more also-rans, joined this time by Jason Mraz. How many male fans does Jason Mraz have? And how many of those male fans are or were the member of a fraternity?

8:41pm. Quick shot of Justin Guarini in the crowd as they wrap up. Possible foreshadowing!

8:45pm. Back from commercial, a bunch of female also-rans are writhing all over the judges. And now Fergie’s on stage, not so much singing as yelping. “I’m going to miss you like a child misses their blanket” is the worst lyric in the history of pop music.

8:47pm. And now the Black Eyed Peas are performing. Nice of Will.I.Am to take a break from producing every major pop record of the last five years so that the other two guys can pay the rent.

8:50pm. Back to the gag awards. This time a salute to the craziest female contestants, one of whom is likened to a donkey. The winner is Bikini Girl, who arrives on stage in appropriate attire to collect her trophy and show off her new breasts. “I was going to ask you what’s new, but I think I know,” quips Seacrest. I think he used the same line when Kellie Pickler came back. Good line though. Point for Seacrest.

8:55pm. And now Bikini Girl and Kara DioGuardi are having a sing off. If nothing else, Kara sings better than she writes.

8:56pm. And Kara rips off her clothes. Apparently for charity. Describing this show in print always makes it seem so weird. And yet, in the moment, it makes so much sense.

9:00pm. This season’s top-finishing female contestant performs a stripped-down version of Time After Time with Cyndi Lauper. Now’s as good a time as any to point out that if you’re looking for more thoughtful analysis of last night’s show, check out what my friend Sarah Liss wrote. It’s exactly what I would’ve written. If hours spent watching QP each day hadn’t left me unable to form complex thoughts.

9:05pm. Also-ran Danny Gokey performs with Lionel Richie. The first song is DioGuardi-esque. Something about chillin’. They segue into All Night Long. Which is what Iraqis were listening to when American tanks invaded in 2003. Ah, memories.

9:15pm. The soft-focus profile of Adam Lambert. His crowning achievement: scaring the crap out of Randy Travis.

9:16pm. And now, he’s wearing a black leather jacket with metal wings or something.

9:20pm. And Paul Stanley tries to destroy his guitar! But he’s barely able to lift it over his head! At one point, he swings and misses the floor. So sad. So awesome.

9:23pm. Commercial break. And finally, an hour and a half into the show, we get an attack ad. The Conservatives are slipping.

9:25pm. Carlos Santana comes on to mellow everybody out.

9:29pm. A montage of all the Ford ads the contestants did this year. They should play this at the auto industry’s funeral next month.

9:31pm. Steve Martin, on banjo, and a couple also-rans singing a folk song. The Idol season finales generally feel like they were organized by a meth addict, but this has to be one of the more surreal shows yet.

9:40pm. After another excruciating ensemble sing-along, Rod Stewart staggers forward to sing Maggie May. He is 64 years old. He seems winded from having to descend a staircase.

9:44pm. The only celebrity they seem to be able to find in the audience is Janice Dickinson. For those of you keeping score at home, she’s 54.

9:45pm. Final gag award, this one for worst female singer. The weird thing being that the winner is a girl they actually advanced.

9:52pm. And now the results. Wait, nope, first a duet. We Are The Champions, with the guys from Queen who aren’t Freddie Mercury. This is right in Lambert’s vocal wheelhouse, if that analogy makes any sense. Allen looks completely lost.

10:01pm. All right. Finally. Here we go. Seacrest is ready to announce the winner. Will it be the obviously more talented, but possibly gay Adam Lambert? Or the entirely unexciting, but probably not gay Kris Allen? Will American overcome its prejudices or lay them bare for all the world to see? Or will they pick a winner based on reasons completely unrelated to sexuality? And how will we ever know either way?

10:02pm. Wow. It’s Kris Allen. And even he seems to feel bad about it. Seacrest tries to save it by bringing Lambert back on stage, but ultimately Allen is forced to sing that song about mountains and hurricanes and dreams and unicorns.

10:06pm. And that’s it. Let the self-loathing, consternation and bitter debate begin! The culture wars are back, everybody! Let’s party like it’s 2004!