An iconic Canadian painting gets a facelift and reveals its secrets

The first restoration of 'A Meeting of the School Trustees' in a century has revealed a much brighter painting with a new, more hopeful meaning 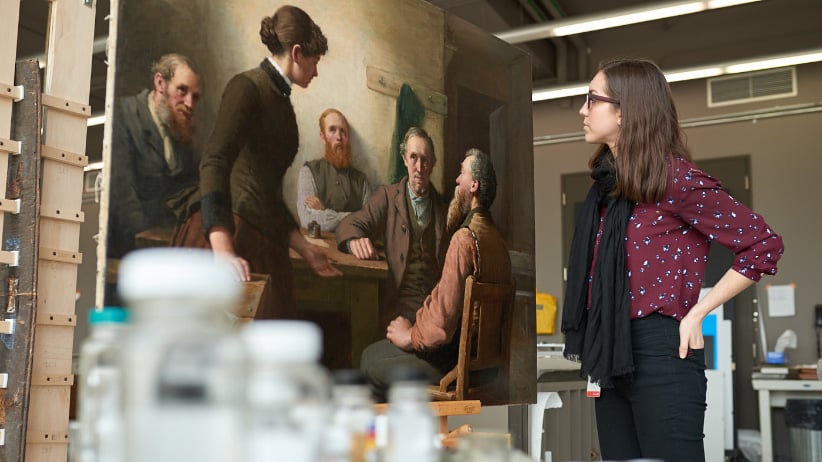 All over the city, bits of Ottawa are being dug out, shined up and facelifted for Canada’s fast-approaching 150th birthday party. At the National Gallery of Canada, the reimagining of its entire Canadian wing—it’s been closed since August and will reopen on June 15—offered museum staff a rare chance to do serious conservation work on some cornerstone pieces.

Often, the collection’s most iconic works end up waiting the longest for a tune-up, simply because curators are reluctant to make visitors go without them. “One of the downfalls about having a national collection—and it’s not really a downfall—is a visit wouldn’t be complete without very particular paintings being there,” says Tasia Bulger, assistant conservator of paintings. “If people go to the gallery for the first and maybe only time in their life, they want to see that painting, they want to see this painting. So it’s hard to justify taking some of them down.”

Once the Canadian wing closed to prepare for its new exhibition (entitled Canadian and Indigenous Art: From Time Immemorial to 1967), staff began looking for the works that would benefit most from major restoration work. Immediately, Robert Harris’s A Meeting of the School Trustees from 1885—familiar to many gallery visitors from the 1992 Heritage Minute commercial that brings the scene to life—jumped out at Bulger. “That painting was kind of bothering me just because it was so discoloured,” she says. When she looked through the gallery’s files, she found it hadn’t had any treatment since 1923 (Lucius O’Brien’s Sunrise on the Saguenay from 1880 is another piece that’s been restored while the galleries are closed).

In the early 20th century, it was common for the National Gallery to send pieces out to freelance art restorers, so the Harris painting had gone to a man in San Francisco, but there were no details in the report of what exactly he had done to it.

Once Bulger got the painting off the gallery wall and into the lab, awash in bright natural light from north-facing windows fitted with UV filters, the painting’s hidden history began to reveal itself. She found five tears that suggested something had fallen into it early in its life, when it was being loaned out frequently. The San Francisco restorer had mended these by gluing pieces of canvas to the back of the painting, then subjected it to a rather aggressive cleaning before adding his own coat of varnish. “Because he wasn’t very talented when it came to compensating for loss where those tears were, he just put a lot of paint,” Bulger says. “Over time, these materials are the ones that discolour.”

After testing to figure out what kind of varnish the restorer had applied and what solvent would remove it without damaging the paint, Bulger spent 25 hours cleaning the surface. She used a custom swab made of soft cotton batting, about twice the size of a Q-Tip, dipping it in the solvent. “It’s almost like nail polish remover in that sense,” she says. “You’re rolling it gently across the surface, and the nice thing is the rolling action picks up the resin, and it’s a very controlled method because you can really watch what you’re doing.” She wears headphones when she does this work, listening to a lot of electronic music or anything mellow that allows her to sink into deep focus.

As the yellow cast of the varnish disappeared, along with a dusky layer of surface dirt, A Meeting of the School Trustees began to reveal a new face. What had appeared to be a dreary scene, with a young teacher attempting to convince dour local officials of her methods, seemed literally and figuratively sunnier once cleaned. “It looks more like she is convincing them,” Bulger says. “It looks more contemporary in the sense that it looks more hopeful.” That interpretation is supported by what she found in the gallery’s files: the artist’s original title, which was changed for some reason when the gallery purchased the painting the year after it was completed, is “Meeting of Trustees of a Back Settlement School—The teacher, talking them over.”

The restoration also revealed that the slate in the corner of the painting is not blank, but includes snippets of the words “school trustees,” “meeting” and “day next.” “It was really cool when we got to the point of removing the varnish in that area: ‘Oh my god! It’s writing,’ ” says Bulger. The writing is very faint, as though the artist intended it to look like something that had been wiped off the slate, and Bulger hopes it will still be visible when the painting leaves the lab.

Once the Harris again takes its place on the walls of the gallery, Bulger will look at it differently. She feels a tug of personal connection to it, both because she spent so many hours tending carefully to it, and because it depicts a scene from Prince Edward Island, where she was born and raised and remembers seeing the Heritage Minute spot. “It will be interesting to see now where it goes in the story of Canada,” she says.