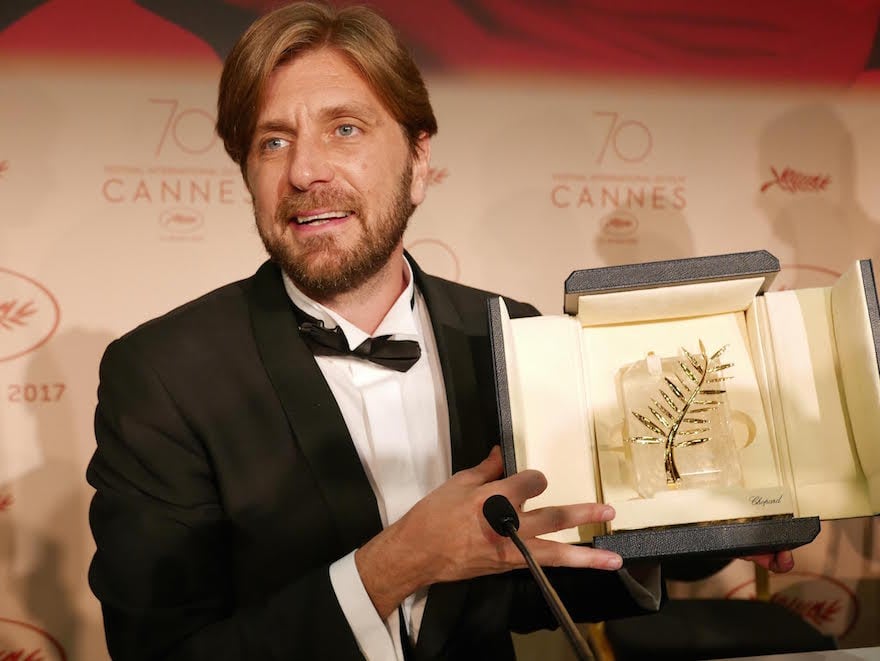 The high altar of world cinema climaxed its 70th anniversary edition by awarding its top prize to a ferocious satire that skewers pretension and liberal hypocrisy in the gala art world. Swedish writer-director Ruben Östlund (Force Majeure) won Cannes Film Festival’s prestigious Palme d’Or for The Square, starring Danish actor Claes Bang as a museum director who encounters a firestorm of controversy when his marketing team unleashes a viral social-media campaign to promote an exhibit. The show is a conceptual installation that consists of a simple square, a safe space offering a sanctuary of trust and caring to anyone who enters. And as a mirror of the art world, the film certainly resonated in Cannes—an opulent sanctuary of arthouse cinema in a blockbuster world.

The other night, when I ran into Östlund sitting alone on a café patio, he said that he relished the opportunity to premiere his film at a black-tie gala, populated by the same type of tuxedoed patrons satirized in his film. And as he accepted the Palme in front of another gala audience, he directed them in delivering a collective primal scream. At a press conference following the awards ceremony, jury president Pedro Almodóvar hailed The Square’s audacity in taking on what he called “the dictatorship of being politically correct,” which he said is “terrible and awful and more horrifying than any other dictatorship.”

With its other prizes, the nine-member jury honoured movies that hit a variety of hot-button issues. The second place Grand Jury Prix went to BPM—Beats Per Minute, an ensemble piece about France’s militant Act Up movement that fought the medical establishment to get faster treatment for those suffering from AIDS. The film, and its cause, is clearly close to Almodóvar’s heart— the gay Spanish director fought back tears while discussing it after the ceremony. German-American actress Diane Kruger, cast as a woman who loses her husband to a nail bomb in Fatih Akin’s In The Fade, dedicated her prize for best female performance to “anyone who has been affected by an act of terrorism and who is trying to pick up the pieces and go on living.” 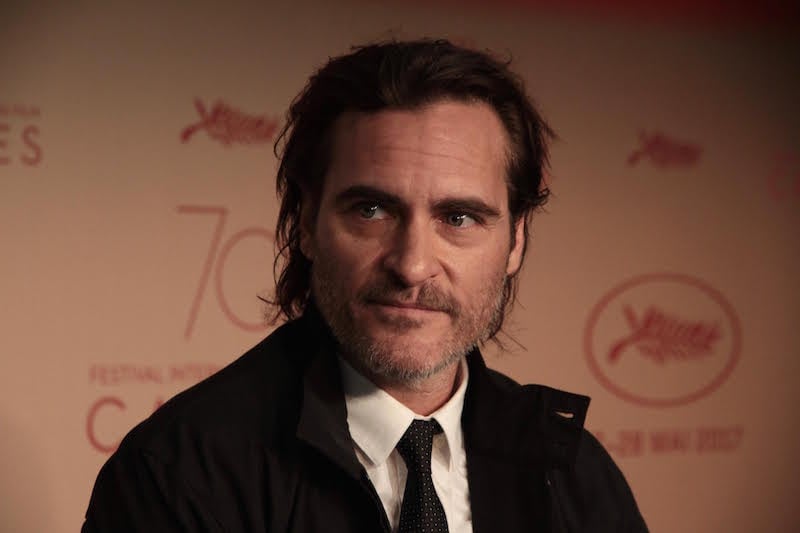 Loveless, a Ukrainian drama about a divorcing couple whose son goes missing (and paints a devastating portrait of Mother Russia) took the third-place jury prize—although it led critics’ polls, and was favoured to win the Palme.  You Were Never Really Here, the violent experimental thriller that closed the competition, was the only film to win two awards. Scottish writer-director Lynne Ramsay shared a best screenplay prize with the writers of The Killing of a Sacred Deer—and Joaquin Phoenix, who dominates Ramsay’s film in his role as a hallucinating hitman, was named best male performer. Phoenix was clearly stunned by his win. As he took the stage, he said, “This was totally unexpected—you can see from my shoes,’  then pointed to the Converse sneakers that he was wearing with his tux.

The jury went out of its way to recognize women. It honoured Nicole Kidman—the queen of the festival with roles in three films plus a TV series premiere (Jane Campion’s second season of Top of the Lake)—with a special anniversary award. And Sofia Coppola became only the second woman in the festival’s history to win the best director prize, which went to The Beguiled, her innocuous and unnecessary remake of a 1971 Civil War western set in a girls’ boarding school, with Colin Farrell assuming a role originated by Clint Eastwood.

At the jury press conference, when asked about the under-representation of women onscreen, Jessica Chastain expressed her disappointment with the depiction of women in the competition. “If you have female storytelling, you have more authentic female characters,” she said. “What I took away from this experience is how the world views women, which was quite disturbing to me, to be honest. When we have more female storytellers, we will have more of the women I recognize in my day-to-day life, who are proactive, who have their own agency, don’t just react to the men around them, but have their own point of view.”

As other women on the jury chimed in, their colleague Will Smith added: “A couple of black folks won’t hurt none either. We’ll talk about that at another time.”

Most critics agreed that this year’s competition was weaker than usual, and the strongest films lay well outside the mainstream, with the exception of the Netflix action-adventure Okja and In the Fade.

Here are my top five picks out of what I saw in Cannes, both in and out of competition:

Every year there’s a beloved film playing out of competition that you wish was in the running. In the 70th anniversary edition, it was this documentary from the incomparable Agnès Varda, who at 89 was the oldest auteur in the program. If it turns out to be her last film, it would serve as noble finale. Varda teams up with a photographer named JR, who pastes giant images of ordinary people on walls in their villages. He’s never seen without a fedora and dark glasses, which Varda can’t convince him to take off. He reminds her of the young, bratty Jean-Luc Godard, with whom she had a bittersweet history, and whose presence gradually haunts the film’s heartbreaking narrative.

In a festival awash with stories of children adrift, this masterpiece from Russian director Andrey Zvyagintsev (Leviathan) is about a couple so entrenched in their divorce that they’ve utterly ignored their miserable 12-year-old son—when he goes missing, both too busy with their new, vacuous lovers, it takes them a day or so to notice. The story is set in a wasteland with visuals that are majestically bleak, if that’s possible. And as the couple search for their missing son in a winter so unforgiving even the snow doesn’t have the heart to cover the ground, the ultimate victim is not the child, but Mother Russia—abandoned and in ruins.

Shown as the final film in Cannes, it delivered an electroshock jolt. It’s a violent and boldly experimental thriller starring Joaquin Phoenix as a hallucinating hitman armed with a hammer and a roll of duct tape, who’s hired to rescue a teenage girl from sexual slavery. Scottish filmmaker Lynne Ramsay turns genre convention inside-out, and mixes up the narrative with elliptical editing and a soundscape that keeps sliding out of phase.  Phoenix, meanwhile, pulls of the performance of his life in You Were Never Really There (not to be confused with I’m Still Here, his 2010 attempt at career suicide). As Joe, an Iraq war veteran haunted by childhood trauma, he carries the movie almost single-handedly on his hulking frame–enlarged by a 30-pound weight gain—and conveys a mercurial intensity that slips between savage and tender. Joe is an avenging angel—with shades of Taxi Driver’s Travis Bickle and playful allusions to Psycho’s Norman Bates—an ex-military brute who could give Jack Reacher lessons in unsentimental homicide. 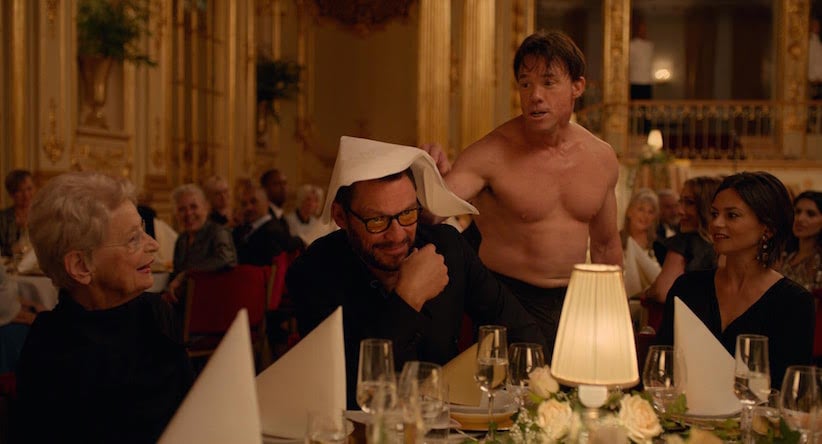 This audacious and exquisitely dark satire from Swedish writer-director Ruben Östlund (Force Majeure) is art that takes aim at art with its story of a debonair museum director (Claes Bang) who tumbles down a Bonfire of the Vanities road to hell paved with good intentions. Östlund’s target is polite liberal hypocrisy—demolished in an excruciating scene where a half-naked performance artist acting as an ape runs riot at a charity gala, pushing their patience (and ours) beyond the pale. The movie also features Elisabeth Moss (Mad Men, The Handmaid’s Tale), who provided this year’s Toni Erdmann moment—a fit of outrageous comedy that disrupts the solemnity of all the serious art.

This was an actual art installation. It had no stars in the cast, was only six and a half minutes long, and involved an excursion by limousine to and from a secret location on the edge of town. You watched it alone. And, strangest of all, there was no screen. A virtual reality installation, Carne y Arena (Virtually Present, Physically Invisible) was created by Mexico’s Alejandro González Iñárritu, the Academy Award-winning director of Babel, Birdman and The Revenant, and shot by his frequent collaborator, Emmanuel Lubezki, who has three Oscars of his own for cinematography. Based on the true stories of refugees crossing the Mexican border to the U.S., Carne y Arena (literally “Meat and Sand”) takes us across a new cinematic frontier to a place where anything seems possible.