Andre De Grasse took up sprinting only a few years ago. But he heads into the Pan Am Games as one of the world’s fastest men. 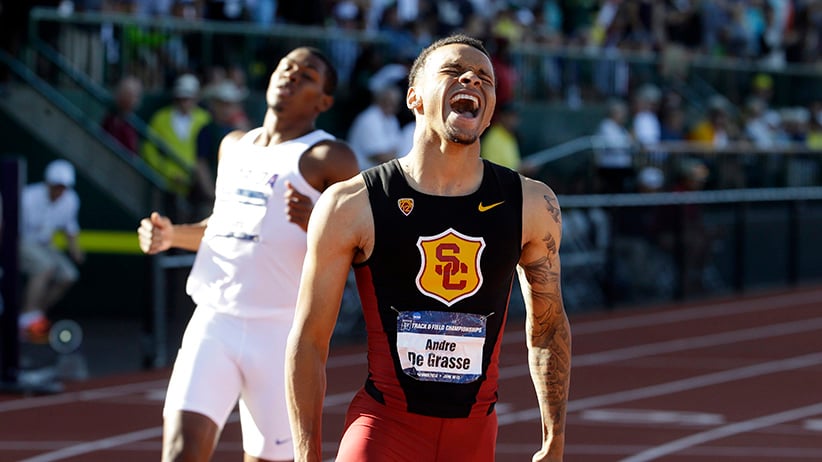 The day Andre De Grasse drifted onto the Canadian track scene—running the 100-m in a stunning 10.59 seconds—he got confused on his way to the podium. He’d blown away a field of high school all-stars, posting a time that would have beaten a lot of nationally carded sprinters. But organizers had to herd him onto the centre riser, because the kid seemed in a state of partial denial. “I don’t think he got the meaning of what he’d just achieved,” recalls Tony Sharpe, De Grasse’s coach at the event, an invitational meet at Toronto’s Varsity Stadium. “It’s a joke between us, to this day.”

To call De Grasse a neophyte at that time would have been flattery. It had been seven short weeks since the Grade 12 student from Markham, Ont., had tried the sport for the first time at a York region track meet, lacing up spikes he’d borrowed from a friend, knocking off a 10.9-second 100-m without bothering to set up in the starting blocks. Sharpe, a former Olympian from Pickering, Ont., happened to be watching, and set about recruiting De Grasse to his track club, the Speed Academy. “This kid,” he told his wife that afternoon, “has got something special.” Two sparkling years at Coffeyville Community College, a junior track powerhouse in southeastern Kansas, would follow; De Grasse won three U.S. national titles there and, by last September, he was lining up against the best of the NCAA, starring for the mighty Trojans of the University of Southern California.

Now, with the Pan Am Games in Toronto just two weeks away, the soft-spoken 20-year-old is shaping up to be a hometown hero in track’s most-watched event. On May 17, at the Pac-12 championships, he snapped heads around by running a 9.97 in the 100-m, the first sub-10-second run by a Canadian in 15 years. Three weeks later, at the NCAA championship in Eugene, Ore., De Grasse once again had fans and coaches pulling their jaws off the floor. Not only did he waste the field in the 100-m by running a 9.75, he took the 200-m with an astounding 19.58 and, while the presence of a malevolent wind kept him out of the collegiate record books, Peter Eriksson, the head coach of Athletics Canada, wasn’t hiding his elation. “We have a sprinter,” he declared. “Yay!”

It’s certainly been a while. The last Canadian to break the 10-second barrier was Bruny Surin, who ran a 9.84 at the 1999 world championships—fast enough to tie Donovan Bailey’s national record but not fast enough to win gold. Ever since, this country’s runners have fought gamely to get out of the sport’s second tier and, from time to time, they’ve come close. Five years ago in London, a barely detectable lane violation cost the men’s 4 x 100-m relay team Olympic bronze; De Grasse’s USC teammate Aaron Brown has run the 100-m as fast as 10.05. But, at most big events, Canadian sprinters have crossed the wire looking at the backs of stars like Usain Bolt, Yohan Blake and Justin Gatlin—and that’s if they got to the final at all.

That 10-second mark is freighted with meaning, because, as Eriksson notes, “10.1 and 10.2 just don’t cut it anymore.” After De Grasse pulled off the feat at the Pac-12s, gold medallist Bailey welcomed the 20-year-old to “an exclusive global club that’s even smaller in Canada,” declaring: “There’s just me, Bruny and, now, Andre.” At the NCAA final, even the normally impassive De Grasse allowed himself a moment of wonderment. “I was in shock, looking at the clock thinking, ‘Wow, this is unbelievable,’ ” he recalled last week in a conference call with reporters. “Coach Caryl [Smith Gilbert] had told me I could run that time, but I still didn’t believe it. I thought I was in a dream. It was unreal.”

The ease and stealth with which he has risen indeed seem supernatural. Shyness has played a part: De Grasse’s inherent reserve keeps him from blowing his horn, à la Usain Bolt, and, in some cases, from seeking advice and direction. Sharpe has been dining out on his story of spotting a kid in basketball shorts three years ago at the York meet, lining up sideways as if he were about to run at a county picnic. After that race, Sharpe taught him the basics of block starts, acceleration and relaxation. The coach used his connections to land the teen a spot in Coffeyville, a school known for its elite track program. But even Sharpe didn’t foresee De Grasse’s meteoric ascent through the U.S. college system.

The building blocks were there, though. De Grasse’s mother, Beverley, had run track as a youngster in Trinidad, cheering on her country’s sprint heroes, Ato Boldon and Hasely Crawford, before she came to Canada in 1987. An early-childhood educator, she raised a boy obsessed with soccer, baseball and basketball. When Andre’s basketball dreams fell through—his high school cancelled its program—a pal recommended he take a stab at sprinting. His mom was thrilled. “Track was something I loved,” she says, “but I’d never forced him into it.”

The rest, if not yet history, is getting there. At Coffeyville, De Grasse won U.S. junior college titles in the outdoor 100-m, the indoor 200-m and the indoor 60-m, and, in the spring of 2014, Beverley’s phone rang like a church bell. “Practically every university in the U.S. was after him,” she says. “Even Ivy League schools—all of them. It was amazing.” She couldn’t quite put her finger on what she liked about USC and Caryl Smith Gilbert, she says, “but I knew right away that’s where I wanted him to be.”

Maybe it was Gilbert’s decision to pay Beverley a visit in Markham last June, even though De Grasse had already committed to the school. Or maybe it was the coach’s tough-love style: She can switch from den mother to drill sergeant in record speed. On a conference call with reporters last week, with De Grasse listening in, Gilbert raved in one breath about De Grasse’s achievements, then added with the next: “I’m still going to yell at him and tell him that he’s slow. I’ve always dealt with him like that. I’ll tell him, ‘That was the worst 9.75 I’ve ever seen!’ ”

De Grasse laughs, knowing Gilbert’s hectoring conditions him for the big races, and big decisions, that lie ahead. After the Pan Ams come the IAAF world championships in Beijing, where all eyes will be upon him, and a big win could take his life in an entirely new direction. Already, agents have called, sowing visions of Adidas endorsements. Reporters wonder whether he might turn pro this summer, putting off his senior year at USC. “We talk about it as an option,” his mother says carefully, “but he knows that one of the main things was to go to university and get his degree.” De Grasse, for his part, says he hasn’t decided.

Whatever his timeline, he is determined to take his place among the Bolts and Gatlins in the sprinting pantheon. “I feel like I can be competitive with these guys,” he says. “I’ve just got to put my mind to it and feel confident. I can’t be afraid of them, just because they’re gold medallists. I have to go out there and try to make a name for myself.” Some of the biggest names, alas, won’t be at the Pan Ams: Bolt, the current 100-m world record-holder with a time of 9.58, has taken a pass; so has Blake, his Jamaican countryman.

Still, the event is shaping up as a test of De Grasse’s character, because, shy or not, he’s been thrust to centre stage. Toronto 2015 organizers dubbed him “Canada’s new sprint king” in a press alert last week, and it’s hard to blame them. An event starved for stars and storylines now has both embodied in one athlete—a boy raised in the host city’s backyard, with a legitimate shot at gold in its marquee race. Eriksson sought last week to dampen things, warning that De Grasse is just finishing a long season in the NCAA. “He might have a little downer at the Pan Ams and do better at the worlds, I don’t know. I’m always afraid that we’re pushing the expectations on a guy—that if he doesn’t run under 10, everyone says, ‘That’s it, he’s no good.’ ”

It’s a dose of good sense at a time when nothing about the De Grasse camp seems conducive to calm. Last week, Gilbert threw out the tantalizing detail that she’s actually been holding him back, reining in his training to about 70 per cent of his capacity. With a tougher weight regimen, she says, he could build his explosiveness out of the blocks, shaving still more time off his performances in both 200-m and 100-m. What that means for the Pan Ams isn’t clear; even then, De Grasse won’t be working at full power. But his current pace is fast enough to stir the blood of any Canadian nostalgic for the reign of Bailey and Surin. And if he wins, you can be sure he’ll know exactly where to stand.