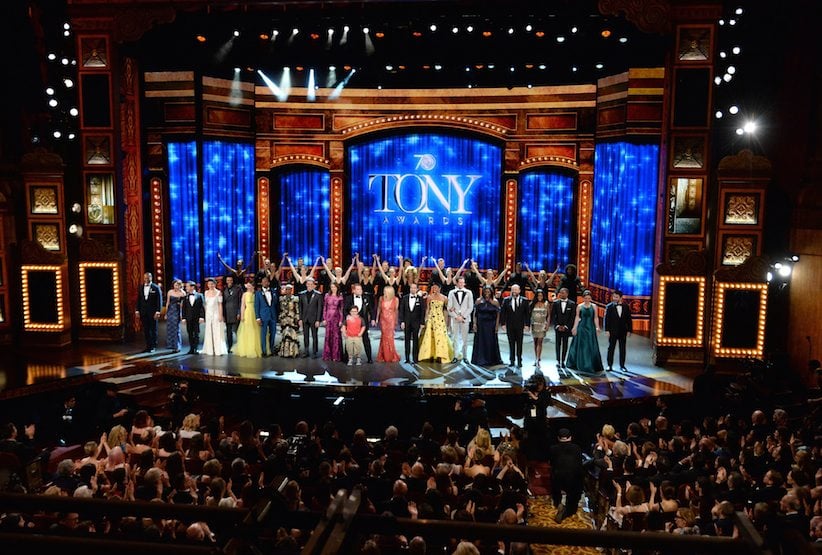 James Corden, center, and nominees perform at the Tony Awards at the Beacon Theatre on Sunday, June 12, 2016, in New York. (Photo by Evan Agostini/Invision/AP)

NEW YORK —  As presenter Barbra Streisand noted, “tonight our joy is tinged with sorrow” — and she wasn’t the only one making reference to the horrific Orlando shootings during the Tony Awards ceremony. But the night was also a celebration of the power of theatre to bring joy. And there much joy for the cast and creators of the wildly popular “Hamilton,” which won a whopping 11 Tonys.

A look at some of the night’s top moments, both onstage and off:

“Hamilton” creator Lin-Manuel Miranda, the eloquent hero of this Broadway season, is known for giving acceptance speeches in freestyling rap. But on this night, he told the crowd, he opted to write a sonnet instead. His own tears over the Orlando tragedy were infectious, as he spoke of “when senseless acts of tragedy remind us that nothing is promised, not one day.” But, he added: “Hope and love last longer, and love is love is love is love.”

THE LOOK OF DIVERSITY

For all the talk about diversity and inclusiveness this season (absent at the Oscars, present at the Tonys), nothing could beat one powerful image: All four of the musical acting winners were black actors. “Think of tonight as the Oscars, but with diversity,” host James Corden had said at the beginning of the show. “It’s so diverse that Donald Trump has threatened to build a wall around this theatre.”

Speaking of Corden, after his own sombre opening referring to Orlando — a piece he pre-recorded to be sure to get it right — the late-night TV host delighted the crowd with an ode to what seemed like dozens of past Broadway shows, from “Les Miserables” to “Phantom of the Opera” to “Sweeney Todd” to “Grease.” And there’s no easier way to win over a theatre-loving audience than to sing a few bars from “Rose’s Turn” in “Gypsy.”

WHAT YOU DIDN’T SEE

During commercial breaks, Corden worked the crowd a bit, and this included enlisting prominent audience members for impromptu singalongs. He got Jeff Daniels to sing from “The Sound of Music,” and he got Jake Gyllenhaal and Sean Hayes to sing from “Aladdin.” When he saw that Gyllenhaal was chewing gum, he simply took it and put it in his own mouth.

Speaking of singalongs, Corden adopted the “Hamilton” practice of performing for a streetside crowd, actual putting on brief shows outside the Beacon Theater. This made for some odd combinations, like Miranda and Andrew Lloyd Webber joining Steve Martin and Edie Brickell in singing “Tomorrow” from “Annie” — or the cast of “Fiddler on the Roof” singing “There’s No Business Like Show Business” from “Annie Get Your Gun.”

A BLAST FROM THE PAST FOR GROBAN

Speaking of “Fiddler,” Corden had a surprise for presenter Josh Groban: He unearthed, and played, a clip of the singer performing Tevye as a high school student. Groban seemed to have a good sense of humour about it.

Many people thank their parents or their kids in their speeches, but Renee Elise Goldsberry, who plays Angelica Schuyler in “Hamilton,” had an especially poignant moment speaking about her years-long struggle to become a mother. “If you know anything about me you know I’ve spent the last 10 years just trying to have children,” she said. “God gave me Benjamin, he gave me Brielle _ and he still gave me this,” she said, gesturing to her Tony.

Ivo Van Hove, who won for best direction of a play (“Arthur Miller’s A View From the Bridge,”) told the story of how when he first came to New York at age 20, he met a woman on a park bench, and told her he was an aspiring theatre director. She asked for his autograph — because, she said, “you never know.” So, the director surmised in his Tony speech: “She’s watching now and thinking, ‘See? I was right.”’

If you were the “Hamilton” cast, wouldn’t YOU be partying? The “Hamilton” bunch had a day off on Monday, and it’s a good thing: their after-party Sunday night was way cooler than the official post-Tony gala. The show took over the Tavern on the Green restaurant in Central Park, and danced to a DJ until the early hours. Rapper Common, who introduced “Hamilton” at the ceremony, was among the guests. Besides eating, drinking and dancing, one could pose against a green screen and be inserted into a famous “Hamilton” photograph.

Introducing Streisand, Corden warned that medical personnel were standing by, just in case her return was too exciting for some. She was appearing on the Tony stage for the first time since 1970 to present the award for Best Musical _ to “Hamilton,” of course. “You’re making me verklempt!” she called out when the crowd gave her an ovation. Dressed in a ruffled, high-collared white blouse and black vest, she quipped when she opened the envelope: “Thank God I picked the right outfit.”

Sheldon Harnick, the 92-year-old lyricist, wasn’t above a little healthy self-promotion when he received his Lifetime Achievement Award. Responding to the accolades that had just been showered upon him, he replied: “Thank you. If I didn’t deserve it, this would be embarrassing.”