A picture paints a thousand lies: On truth and war photography

In a year packed with exhibitions and ceremonies marking the Great War’s anniversary, creating something original and unforgettable is a challenge. But Dispatch: War Photographs in Print, 1854-2008, opening Sept. 17 at Toronto’s Ryerson Image Centre, manages to do it. Far more than a show documenting combat history, it is a brilliant exercise in disproving a notion we often take for granted: that war photographs are faithful documents of the past.

The show’s origins stretch back 15 years, to when its curator, Thierry Gervais, a professor at Ryerson University, began studying images of the Crimean War published in The Illustrated London News. In the mid-1850s, the paper had sent Roger Fenton to Sevastopol to photograph the conflict. Although Fenton’s pictures are among the first iconic photos of war, his images never made it into print. Instead, the paper employed them as a foundation for creating wood engravings, then the most popular technique used by the press to bring text and image together—and a process that introduced modifications to Fenton’s documents of battle. 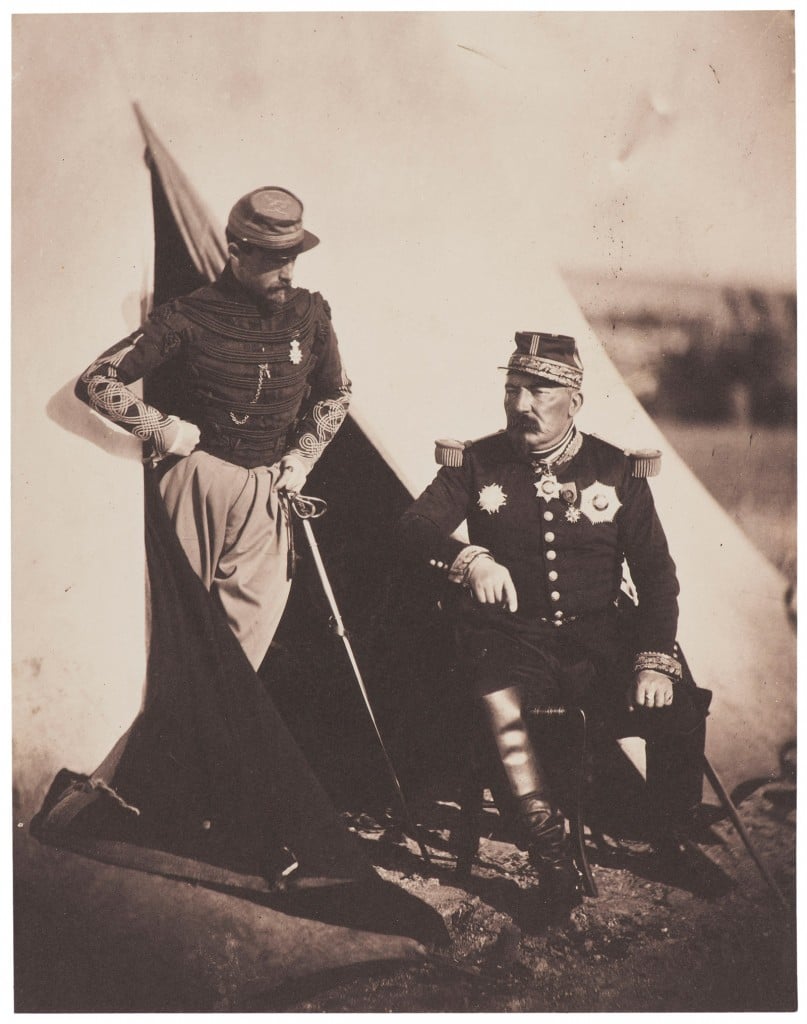 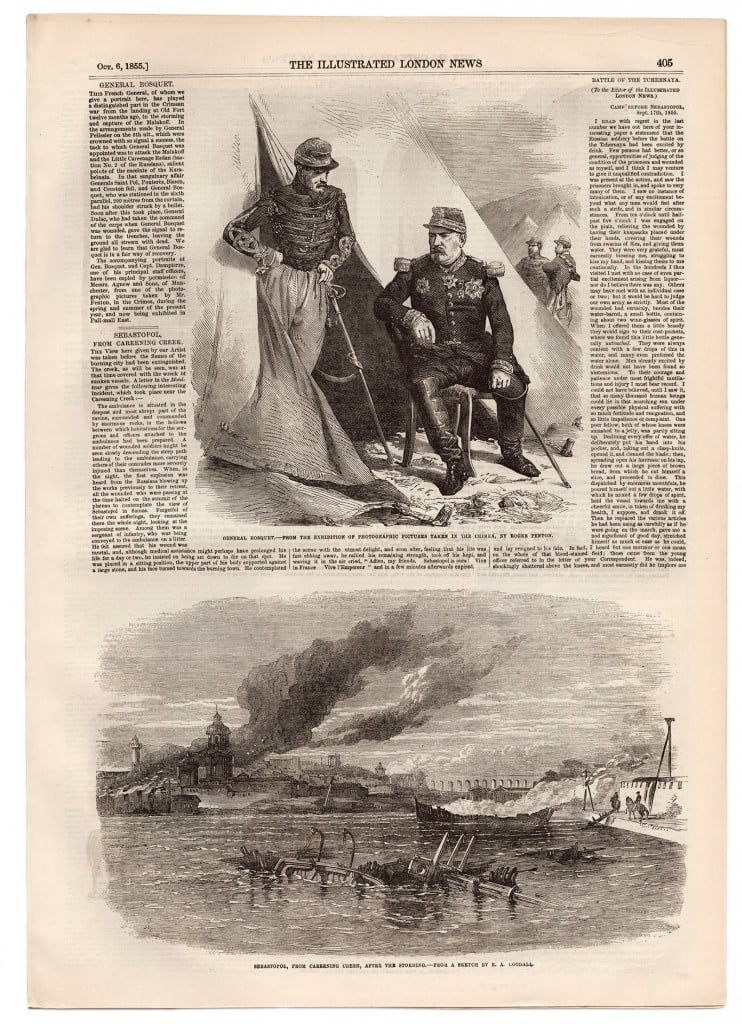 Backgrounds and people were erased and scenic details enhanced, both to present what readers deserved to be told and for aesthetic reasons, resulting in fictionalized takes on the war. “We always think that the press was waiting for photography,” says Gervais. “In fact, when the medium first came into use, it was considered deficient.” Although we may think of photographic manipulation as belonging to the digital age, as Dispatch reveals, since the Crimean War, press images documenting conflict have never just been about capturing a moment in time.

Following the Crimean War, Dispatch covers another 150 years of conflict, up to the Afghanistan war. For the epic undertaking, Gervais went through hundreds of press archives and thousands of magazine pages—rarely ever in the same place—to present original photographs beside their counterparts in print. “I hope people will play a bit of ‘Where’s Waldo?’ ” says Gervais. “They will realize that war’s presentation in the press has to be seen as an aesthetic representation.” 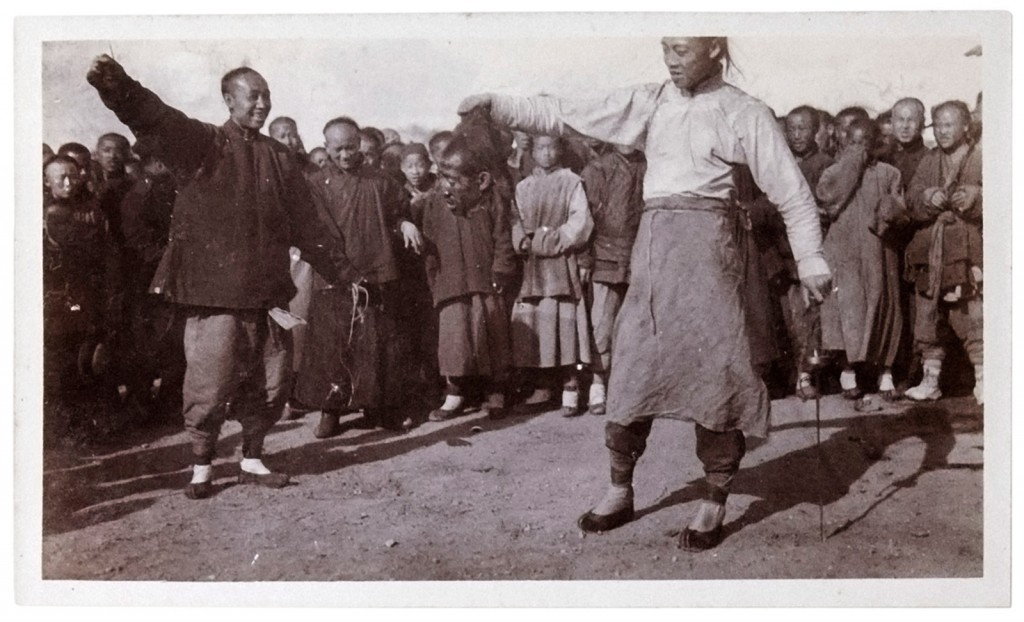 ‘Execution of a Koungouse’: This photo taken during the Russo-Japanese War became the basis for a much bloodier 1904 magazine cover, below. (George Rogers, Exécution d’un Kongouse, 1904. Courtesy Archive of Modern Conflict London.) 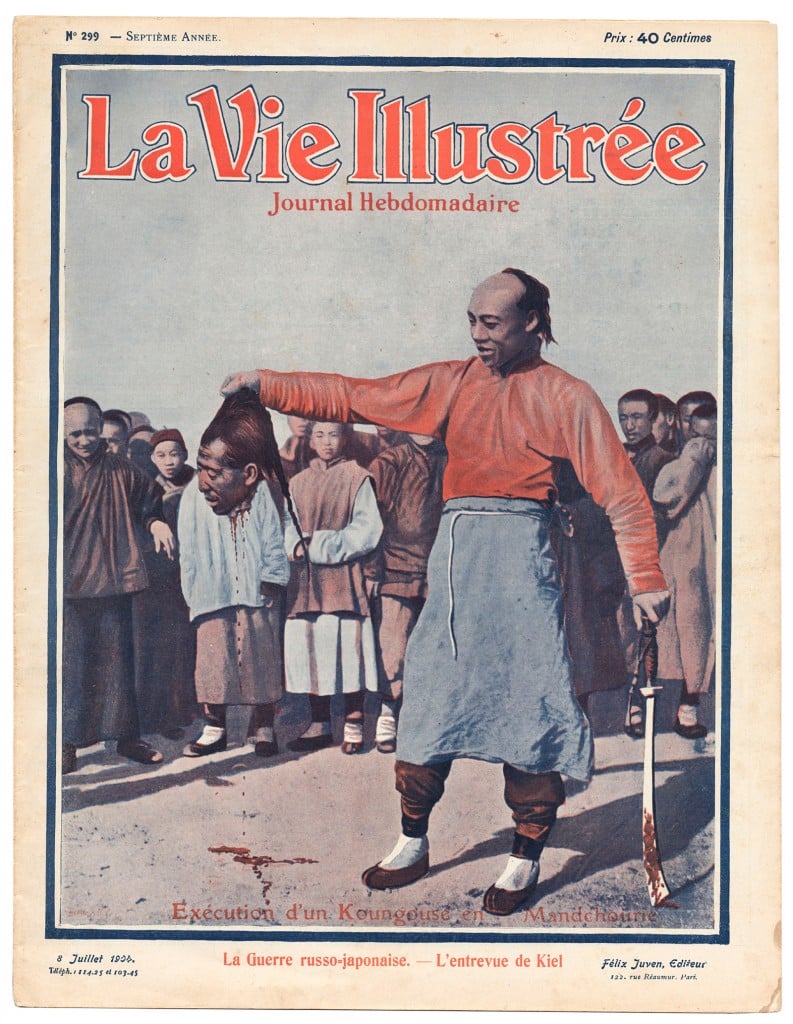 Dispatch also documents how military photography helped give birth to the modern magazine. After Collier’s Weekly sent photojournalist James H. “Jimmy” Hare to document the Russo-Japanese War in 1904, it artfully sequenced his pictures across a spread called “Scenes of War,” turning a stack of photographs into a story that “turned the reader into a spectator as the action unfolded,” says Gervais. Soon, a new class of professionals emerged—picture editors and art directors—to select, trim and sequence photographs to seduce readers into their ultimate goal: magazine sales. 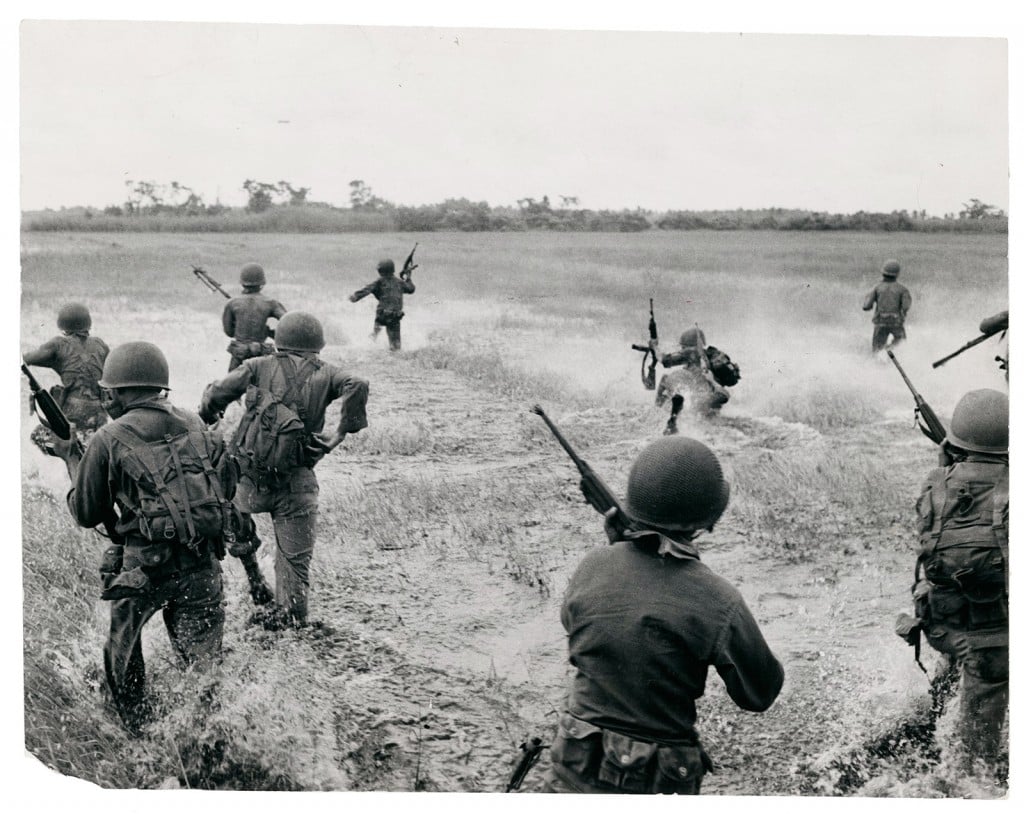 Doctored: The combat field in this Vietnam War photo by François Sully appears to have been expanded, and the position of some soldiers changed. (The Black Star Collection, Ryerson Image Centre) 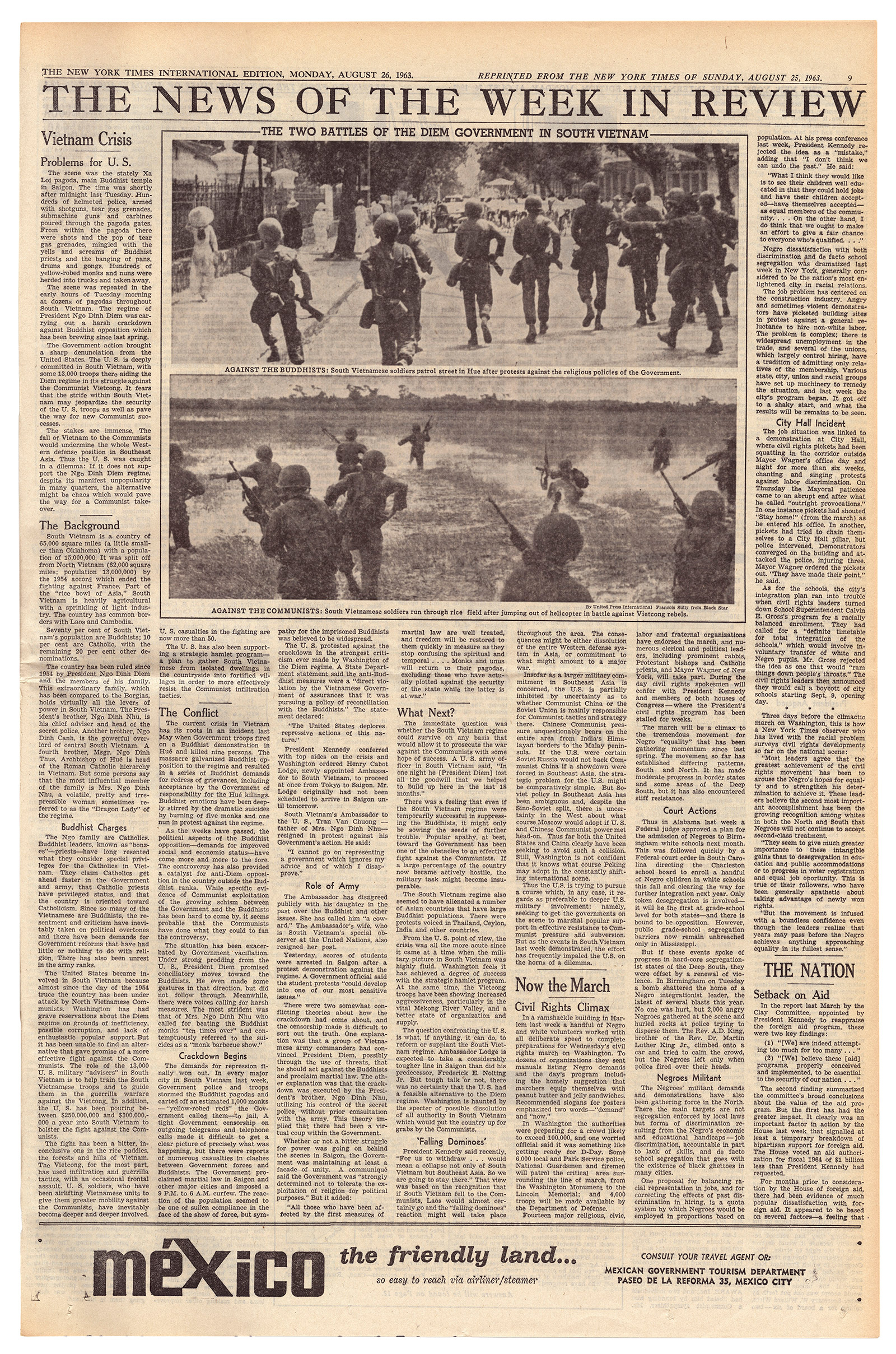 By the 1930s, photographers began to rally for minimal editorial interference in the publication of their pictures, a charge led by Robert Capa, famous for his images of the Allied forces landing at Omaha Beach. His pictures, taken while under constant fire, set the standard for a new style of war photojournalism. (“If your photographs aren’t good enough, you’re not close enough,” he stated.) Still, such images were subjective, too. “Capa’s snapshot aesthetic gives the feeling of being a direct witnessing to the news,” says Gervais, “but it was still one man’s highly conscious style.” Moreover, war photographers—notably, Eugene Smith—began printing and interpreting their own negatives, creating areas of brightness, and reframing to highlight the messages they wanted to express.

Fittingly, Dispatch ends with the mesmerizing and controversial work of Luc Delahaye, a former Newsweek photographer. In 2003, after New York’s Ricco-Maresca Gallery showed his poetically composed picture of a dead Taliban fighter, controversy ensued over Delahaye’s presentation of carnage reportage as art, and over his work’s high price. Not long after, Delahaye announced he was no longer a photojournalist, but an artist. His statement gets to the heart of Dispatch: When the press photographs war, a creative hand is always in the mix. Once we realize this, our understanding of history will be considerably more accurate.