Alanis Morissette on the re-release of Jagged Little Pill

Alanis Morissette on diva feuds and body image, unhealthy sexuality, reading to her son, and the re-release of Jagged Little Pill 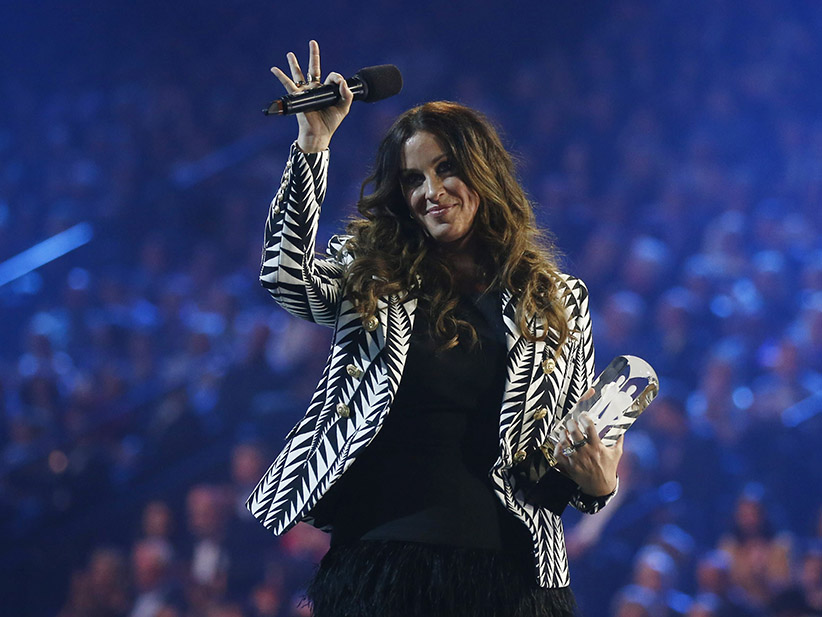 It has been 20 years since Alanis Morissette released her third album, Jagged Little Pill. The rage and the fervour captured in the disc’s first single, You Oughta Know, immediately shifted the music landscape of the mid-’90s, which was, at the time, teeming with misogynist rockers. Morissette’s JLP protested it all: the glossy sheen of pop, the slick productions dominating the Billboard charts, and her choruses had a way of commenting on the state of equality without sounding strident. Performers such as Katy Perry, Avril Lavigne and Kelly Clarkson have all stated that listening to JLP brought them the kind of the musical epiphanies they needed to get their own careers off the ground. Morissette recently revisited early sessions from the disc and re-released a four-disc, 20th anniversary edition of the album.

Q: How do you feel about opening the vault of rejected tracks for the album?

A: I’m vulnerable. I’m assuming [the demos] will be taken in the spirit of that moment. It’s a tipping of the hat to an era that’s gone. Those songs were not chosen for a reason.

Q: The track Superstar Wonderful Weirdos touches on the whole idea of the Hollywood bubble many live in.

A: I was already going back and forth from Toronto to L.A. so that [realization] came soon. I think the experience in Canada of having a couple of records out [when I was so young]—and seeing the suffering that came from having some standard ascribed of how we’re supposed to live and look and be and what our sexuality is supposed to be, and what our personalities should be—that did it.

Q: So what would you consider to be the biggest battle you faced at the time?

A: Patriarchy was loud. And then there wasn’t as much sisterhood because of where the feminist movement was then.

Q: At the MTV Music Awards this year, Nicki Minaj, Taylor Swift and Miley Cyrus were all either trading barbs or making amends. What do you make of these open feuds?

Q: Yet this outdated idea of duking it out diva-on-diva style—in public—is attractive to so many viewers.

A: There’s something about conﬂict and drama that is really palatable in pop culture right now. There was no Twitter during the mid-’90s but there were quieter feuds. A lot of women in [the entertainment business] back then expressed their anger by exploding and expressing it very publicly, but most of it was media-cloaked. My style was to implode and to get sick and get depressed. These divisive moments amongst artists were still happening—it was just off the radar, ’cause frankly, there was no radar.

Q: A song you wrote called Gorgeous speaks to the unattainability of conventional beauty. After Jagged Litle Pill was released, did you feel fooled by the notion of getting red-carpet perfect?

A: A lot. I felt affected by it long before I moved to Hollywood. The standard of beauty in the ’80s into the ’90s was the Ally McBeal era: you were supposed to be 98 lb.! We are now in a Kardashian era—for lack of a better term—where curvier is a little bit more included as a beauty standard, so that’s fortuitous. Back then? We were told there’s a certain aesthetic that we had to aspire to, and if we reached it we were allowed into the golden circle of Hollywood.

Q: How would you say you responded?

A: A full-blown eating disorder is what I had. I would starve myself. Then I would go to the other end, especially when I was touring. It was so stressful. I’ve even partnered with the National Eating Disorder Association around the time where I did the marathon—the irony being that I was so tiny then! I went around hiding behind my hair, really, to hide the weight. I thought it was like a blanket.

Q: How has all that changed?

A: Now I think of grooming as something different altogether. To look cute is part of my spiritual practice.

Q: You signed Naomi Klein’s Leap Manifesto regarding climate change in Canada. Why?

A: I want to do my small part in protecting our land. I partnered with Adam Yauch of the Beastie Boys years ago when there was some potential oil drilling to be stopped. I was doing environmentalism for a long time but then I stepped away to be a mama. Whatever small thing I can do, I do, but I don’t feel like a poster child for this movement.

Q: Another demo, which is called King of Intimidation, sounds like it was written for Donald Trump. It begins with an offensive public service announcement about women.

A: It is from the ’40s. There’s a whole rich audio stock of patriarchal comments. I’m tickled by misogynist books from the 1800s. I’m just obsessed with the messages they sent moms and women. To be perfectly honest, I don’t even know [Trump’s] politics. I have not ever even heard his voice.

Q: You’ve said we need to relook at feminism.

A: I think feminism might best be called the feminine movement, because really it’s about men and women alike. We’re all being called to honour the feminine in all of us. Maybe even cultivate it a little more. The masculinization of society is what’s happened, right? We err on the side of action and extroversion. To me that’s what patriarchy is all about: hating the feminine qualities in all of us.

Q: A trans rights movement is happening right now with Caitlyn Jenner and Laverne Cox at the forefront. Are they propelling a shift?

A: It is the rise of allowance, you know? The rise of having the courage to be who we really are. That’s warrior work. When I look around and see people admitting who they’ve always been and moving out of shame, I see we are moving away from the past. Shame is this steel-trap prison. Anytime anyone is—whether it is Caitlyn or others questioning sexuality— vocal about who we are, they become a warrior. Anytime any of us steps up and says, this is how I’m feeling, this is what I want to wear, this is how I want to look, this is who I want to marry—these are all declarations of self. We’re moving out of this shame-ridden era. At a snail’s pace, but it’s happening.

Q: How do you make sure your four-year-old son has with a more progressive mindset?

A: I rewrite everything for my son—every book, every fairy tale. In so many children’s books, I just see the continuum of masculine on one end and feminine on the other. I just make sure that everyone’s honoured and that it’s a win-win. Most children’s movies, books and TV shows are obsessed with this divisiveness and conflict and win-lose, so I’m constantly revisiting this with him.

Q: In your first cover story with Rolling Stone you called yourself a pervert. Obviously that thinking has changed?

A: Yes. I was severely undereducated in sexuality. The most miraculous and most personal process is our sexuality. Everyone knows one plus one is two, but there’s not a lot of education around how to navigate our bodies. There was a severe void in being taught all about the human body or what healthy sex even is.

Q: Have you experienced a lot of unhealthy situations around sex?

A: I was on the receiving end of a lot of wildly inappropriate behaviour and boundaries were being violated left, right and centre. I was too young to understand how to protect myself.

Q: Madonna still gets criticized for being overly sexual. Why do you think that is?

A: I’m all about flying in the face of anything that is attempting to keep us trapped, but a hypersexualized persona is an incomplete presentation of what a human being is.

Q: In your upcoming memoir will you be naming names regarding some of your past relationships?

A: I will be telling true stories—but I have to change names. It’s not my intention to ruin 50 people’s lives.

Q: What has been the hardest chapter to write?

A: The current one. It’s about the last two years. Writing about some of the experiences of being in the entertainment industry at a young age [was hard too]; it was just beyond my capacity to process as a child.

Q: The Price of Desire was the last film you did, is there any other movie in the mix?

A: I’m due for some comedy [laughs]. There’s a lot of self-deprecating Canadian humour in my book.

A: You Oughta Know was the most devastating. Not As We was tough. It was when [I was] going through withdrawal from love addiction—which was pretty gnarly.

A: Even though I talk a good game about how obsessed I am with human connection, I think deepening intimacy is the most terrifying thing for me. Yet I persevere.