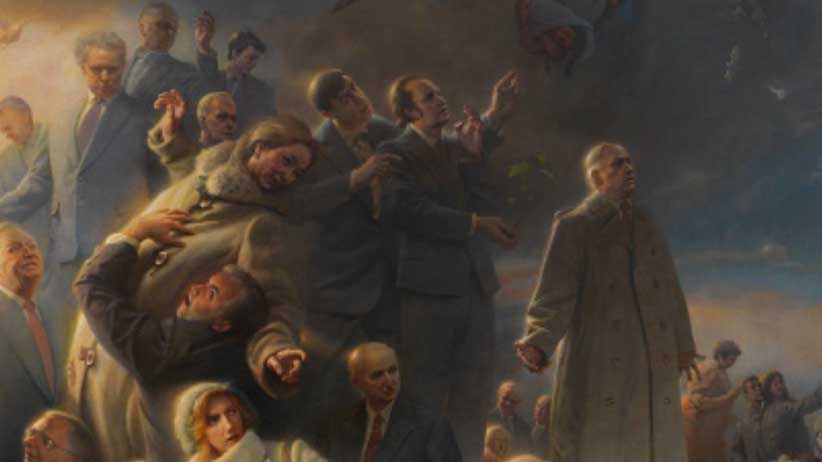 A section of the painting “Quebec” by Adam Miller. (Adam Miller)

This week the tradition continues when Quebec, by 38-year-old Adam Miller, an artist born in Eugene, Ore., is unveiled at the McCord Museum in Montreal; it travels to Quebec City’s Musée national des beaux-arts on November 14. According to renowned art historian François-Marc Gagnon, who has co-authored an eponymous book on the painting (to be released this month by McGill-Queen’s University Press) the nine-by-10-foot work of 400 years of the province’s history is a masterful “witness of our times” that is also “completely out of fashion with today’s art world.”

READ: An iconic Canadian painting gets a facelift and reveals its secrets

The figures of René Lévesque and Pierre Elliott Trudeau occupy the centre of Quebec, while two unnamed Mohawk warriors from the 1990 Oka Resistance dominate the painting’s foreground. Over 30 other of the province’s foremost figures comprise the rest of the work. All are rendered in a style and technique that draws from 17th-century Baroque art. It is the first painting of its kind to present an epic narrative about the country since Benjamin West’s legendary masterpiece. “This sort of work ceased to exist,” says Gagnon, “as photography and cinema took over as a visual documentations of current events. At the same time artists—as well as the schools that taught them—began favoring works of abstraction.” 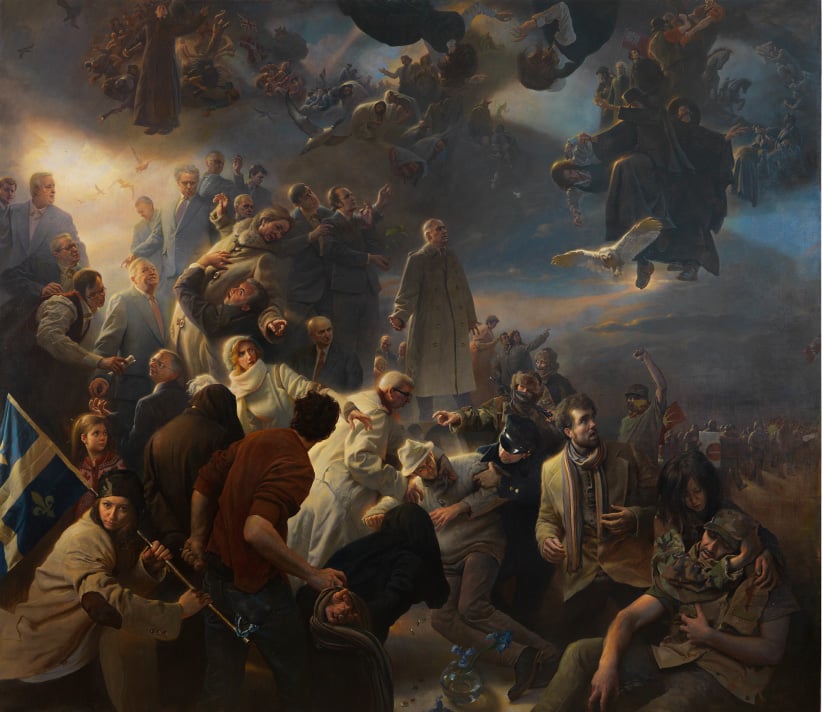 Miller has no qualms about swimming against the current of contemporary art. “I have always been at odds with authority,” he says. In grade school I remember getting kicked out of class for not standing during the pledge of allegiance.” Another moment he recalls from his adolescence  is receiving a Michelangelo calendar for Christmas at age 14. Until then Miller had been interested in comic books and illustration, but seeing pictures of the Sistine Chapel made him aware of works “that I didn’t know existed but was drawn to immediately. I was catapulted into a new world.”

To learn how to paint large mythical narrative scenes, Miller, considered a formal training at Portland’s Pacific Northwest College of Art. When its administration told him that he “knew enough about drawing and would be taught to paint abstractly,” Miller went to Italy instead, enrolling at the Florence Academy of Art. More interested in Rembrandt than Rothko, he felt perfectly at home in Europe learning the techniques of Old Master painters. (In keeping with that tradition, Quebec was drawn with charcoal, then under painted, then painted with colour.)

While in Italy, Miller read authors Carl Jung and Joseph Campbell, which fuelled his interest in mythology, and visited as many museums as he could, to see firsthand the masterpieces of 16th-, 17th-, and 18th-century painting.” In addition to Michelangelo, Rubens and the French Romantic painter Anne-Louis Girodet also became sources of inspiration.

In 2012, Miller relocated to Manhattan (today he is based in Brooklyn) and began taking classes with the late American portrait artist John Nelson Shanks, whose commissions included paintings of Dianna, Princess of Wales; Bill Clinton; and Pope John Paul II. Living in the heart of the art world Miller spent time digesting what others were doing while trying to trust his inner voice that being “out of sync with the contemporary scene was the right path to follow,” he says.

Miller’s conviction paid off when his 2013 series “Twilight in Arcadia,” a body of works about contemporary hunters who invade a bucolic mythological paradise, caught the attention of the media as well as art historians, who recognized Miller’s virtuoso skill and narrative prowess. “It felt like something really clicked,” he recalls.

Among those drawn to the artist’s work was the Montreal businessman, philanthropist and arts patron Salvatore Guerrera. Like Miller, Guerrera admired the genre of epic history painting. For years he would be up at night trying to find contemporary painters working in the spirit of the Great Masters. After spotting Miller’s art online, Guerrera thought, “I have to meet this guy.”

With talk of Canada’s 2017 celebrations in the air, Guerrera had a commission in mind. “The year is important not just because it marks the anniversary of Confederation,” he says, “but the founding of Montreal 375 ago, 35 years of Canadian Charter of rights, and 225 years of parliamentary institutions in Quebec.” Guerrera visited Miller’s Brooklyn studio and asked him if he might paint “a storyboard of many stories about Quebec and Canada,” because, he says, “there is no better communication tool than art.”

The son of Italian immigrants, Guerrera spoke neither French nor English as a child. “The textbooks that fascinated me the most were the ones with drawings of scenes from history. Learning about this country and its languages had everything to do with those pictures. Those grade-school images never left me.” As an adult Guerrera travelled to the museums and cathedrals of Europe and wondered why Canada lacked large-scale paintings of the country’s history.

Guerrera considered commissioning the Cree artist Kent Monkman, whose work he owns, and who is renowned for his clever revisiting of traditional historical narratives. Ultimately, however, he felt that Miller’s realist style would allow for a better presentation of history’s characters. Although Miller knew little about Canada, it never crossed Guerrera’s mind that he could not handle the job. “The great Old Masters tackled foreign stories and subjects all the time,” he says.

Miller began his work on the painting by embarking upon a rigorous, two-year study of the province’s history, one that included multi-hour conversations with 12 experts, including Gagnon, historian Peter Gossage, and former Québec premier Lucien Bouchard, all of whom he asked the same question: What was important in the making of Quebec, and what is the story of its future?

By mid-2015 he was ready to start painting Quebec, which features two central themes, both visible along a dominant horizontal axis that moves from the work’s top left corner to its bottom right: France’s colonization of Indigenous land that became known as Quebec, and the English-French tensions that consumed the province and the country.

Not everyone in the painting is from the province. Former Prime Minister Kim Campbell is included in the work, as is Louis Riel. “I didn’t want the picture to be Quebec in isolation since Quebec isn’t in isolation,” says Miller. Following a Renaissance art tradition, he painted a self-portrait into the work (he’s the bearded man in the foreground wearing a striped scarf). “I am the stand-in for the person who’s trying to figure out what’s going on,” Miller says. “It’s an acknowledgement of myself as the outsider.”

In the painting’s bottom left an anonymous young woman holds the province’s flag. Miller explains that she is a nod to Eugène Delacroix’s illustrious painting Liberty Leading the People (created to commemorate the July Revolution of 1830) and “a symbol of Quebec as an orphan, a colony that was abandoned.” To her left are citizens who were critical to Quebec’s key historical movements, including the October Crisis. Politicians, among them Pauline Marois and Justin Trudeau, fill out the work’s centre. At the top, you have what Miller calls “the ghosts of history.” These include Samuel de Champlain, considered “the father of New France”; Chef Donnacona, who was kidnapped from his village of Stadacona and brought to Europe by Jacques Cartier in 1536; and les filles du roi, young women who between 1663 and 1673 moved to New France to marry its settlers.

As for Miller, he has received mixed responses to the work so far. People have spoken out passionately both for and against the painting’s narrative. “Federalists and Separatists have argued that I was either working for or against their cause,” he says. Miller takes these reactions as a good sign because the piece was not intended to advocate for one side or another. “As an American I have had a different perspective because I am not embedded in a particular point of view. For four years, I had the opportunity to look at Quebec from all sides, without taking a side.”

Annotation of the “Quebec” painting by Adam Miller 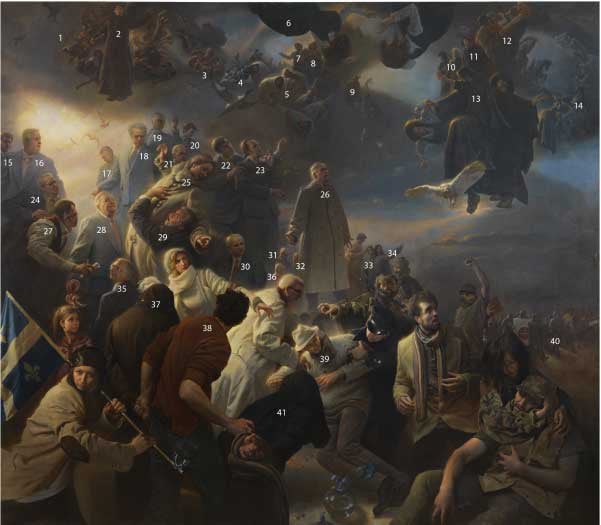