An art show for toilets and ductwork 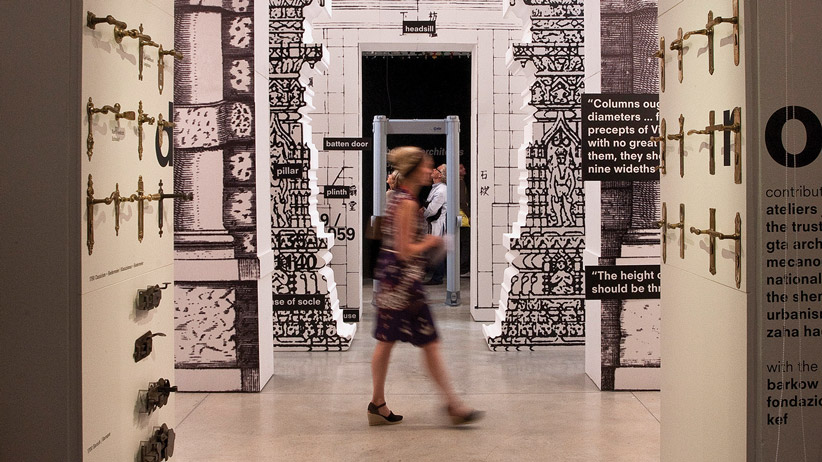 The Roman architect Vitruvius wrote that successful buildings should be of good quality, fulfill the purpose they were built for, and provide delight for the eyes. Several millennia later, progress is being made on Vitruvius’s first two precepts. However, for Rem Koolhaas, director of the 2014 Venice Architecture Biennale, architecture has lost the potential to delight. A case in point appears at the first exhibit to greet visitors to the Biennale’s Central Pavilion. Under the dome, with its Art Nouveau-style frescoes portraying haloed figures and nudes, Koolhaas’s team has suspended an example of debased contemporary design: a cross-section of generic gray-panelled drop ceiling sliced open to reveal innards of metal ducts for plumbing, electricity and HVAC systems.

As an architect, Koolhaas is the ultimate sellout. Last year, a public outcry forced him back to revise his design for tearing up part of Venice’s 16th-century Fondaco dei Tedeschi so it can be converted into a shopping mall for Benetton. Yet without a hint of irony, Koolhaas as Biennale director complains that corporate culture has imposed a mind-numbing conformity among his colleagues. “The market economy has eroded the moral status of architecture,” Koolhaas writes in the catalogue for his exhibition. “It has divorced architects from the public and pushed them into the arms of the private sector—they do not serve ‘you’ anymore, but a diffuse ‘them.’ ”

And so Koolhaas has removed practising architects (besides himself) from the stage. In fact, he agreed to direct the show only if he could sever all connections to contemporary architecture. The most radical show at the Biennale is Elements Of Architecture. Here, Koolhaas, with a team of Harvard grad students, has deconstructed the last several thousand years of architectural history with a sampling of 15 different building elements chosen from different cultures and eras. This arty history of ceilings, doors and windows is told through a barrage of objects, charts, photographs, movies and endless texts. One gallery on toilets is covered in wallpaper that includes explicit photographs of people using various fixtures designed for defecation and urination. There are also actual toilets ranging from a Roman chariot-styled latrine to a computerized Japanese “washlet” that measures the chemical composition of the user’s waste.

Elements details the advantages of the latest building technologies while obsessively documenting what has been lost to the exigencies of the global economy. One gallery devoted to modern facades describes how exterior walls evolved from an ensemble of stylistic parts to a skin focused on protection against the elements. On the floor are facade sections including a media facade that conveys information, and a green one embedded with plants. We are constantly reminded of the trade-offs that come with technology. A display of a heavily insulated facade notes—erroneously—that because this type of wall is focused on saving energy, its windows cannot be opened: “People are not to be trusted to regulate the environment.”

The sense of hopelessness continues at Koolhaas’s Monditalia exhibition in the Arsenale building. Homage is paid to Italy’s past with a faded 5th-century map, printed on an enormous billowing sheet. Yet many of the modern “case studies” emphasize the country’s failures. One exhibit features photographs of abandoned masterpieces of Italian modern architecture built during the country’s boom years in the 1950s. An exhibit on the resort city of Milano Marittima exposes how real estate speculation has littered the place with derelict, uninhabited buildings and tourist traps.

Fortunately, Koolhaas was unable to impose his vision on all 66 national pavilions exhibiting at the Biennale. In fact, Italy’s own pavilion presents an exuberant counterpoint to Monditalia. Here, an exhibit of photographs displays stylish modern works of architecture from Milan; another showcases modern forms sensitively grafted onto historic buildings, and a third celebrates works that address the constraints of their sites. Rem Koolhaas would do well to study this pavilion before he attempts to design another shopping mall in Venice.