(Arcade) Fire and water: How to make music from ocean waves 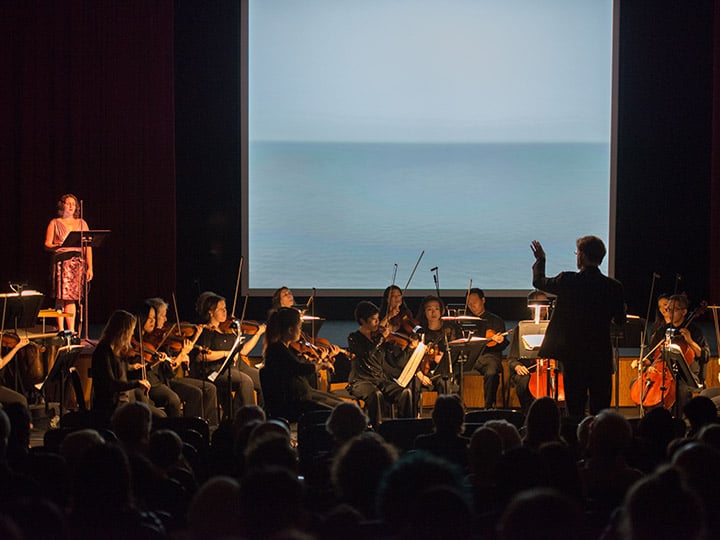 Last week, Richard Reed Parry and Bryce Dessner’s Wave Movements had its North American premiere in the Egyptian galleries at New York’s Metropolitan Museum of Art. (Where? “Left, after the tomb.”) After performances in London and Edinburgh earlier this year, the composers (respectively, members of rock groups The National and Arcade Fire) heard musicians from the New York Philharmonic perform their composition accompanied with a film by Japanese photographer Hiroshi Sugimoto, who repurposed his famous 1980s black-and-white seascapes for the project.

This is luxury casting that few contemporary composers will get, and the commission is shared by the Met, Barbican Centre (who invited Sugimoto), Edinburgh International Festival, Cork Opera House, Sydney Festival, and St. Denis Festival.

Wave Movements began as a surveying expedition in which Reed Parry and Dessner were going to translate wave patterns from different locations directly into musical notation, like a handwritten version of the soundscape recordings pioneered by R. Murray Schafer in Vancouver in the 1960s. Waves come in characteristic patterns, like breaths, which Reed Parry investigated with his Music for Heart and Breath, an experiment that replaced the conductor with a stethoscope. That began as a duet with violist Nadia Sirota at the MusicNow festival (founded by Dessner) in Cincinatti, and got Reed Parry his first classical commission, from the Kitchener Waterloo Symphony. In 2014, classical music stars  the Kronos Quartet recorded it for Deutsche Gramaphon.

Reed Parry and Dessner had a recent and daunting precedent in John Luther Adam’s Become Ocean, which premiered in 2013, won the Pulitzer for music in 2014 and a Grammy the following year. It runs about as long as Wave Movements, and Reed Parry admits he “was mildly devastated to see that someone (whose work I have adored for a very long time) beat us to the punch. Although I guess Debussy beat everyone to that general idea for a piece a hundred years ago anyway.” (La Mer was written in 1905.)

Wave Movements shares some of the judiciousness of Heart and Breath, a structural clarity that the Guardian called “colourless harmonic gruel.” In New York it was preceded by Thomas Adès’s Chamber Symphony, a noir, ironic vamp that was grimly determined to surprise and left the listener unsettled but curious. If a musical figure recurred even once, it was a mere shrug. Following that, Wave Movements had a childlike simplicity. Dessner and Reed Parry are not afraid of repetition.

In Sugimoto’s photographs the steely ocean often has as much texture as the washed-out sky; pictures that could be from Jupiter’s moons. The few times the music and the film aligned in a change of mood it felt significant, but there weren’t many of these moments in the 45-minute work. At the end, when some people were already fumbling for scarves in anticipation of the exit, soprano Estelí Gomez appeared and sang a scrap of Cyril Tawney’s 1950s folk song, “Grey Funnel Line.” For five warm minutes it was like a key had been turned in the lock.

A Canadian premiere is in the works. Whoever programs it gets a full house.