Why art galleries are quietly clearing out their vaults

Inside the quiet world of deaccessioning, where art in vaults is being sold to pay for pricey renos or more desirable pieces 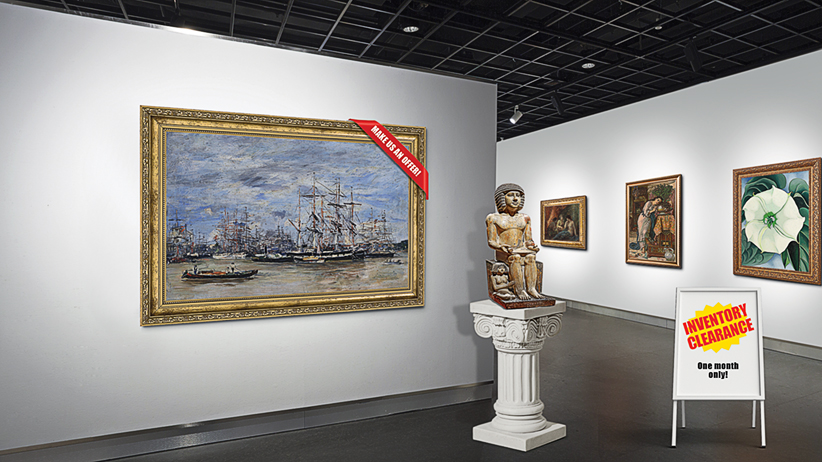 John Augustus Richter was a prosperous middle-aged man when his tenant, the artist George Romney, painted him around 1772. For eight decades, that portrait belonged to the Art Gallery of Ontario. No longer. It was among a host of works shipped to New York to be sold off at a Sotheby’s auction last month. While “a beautiful portrait, it’s a very minor Romney,” explains Lloyd DeWitt, the AGO’s European art curator. “It’s not an important person, a full-length portrait, or an outstanding example of very much at all.”

The curatorial decision was to get rid of it, along with nine other works from the AGO—some of the 65 pieces DeWitt has cleared out of the Toronto institution in recent years. That amounts to 20 per cent of the European painting collection. The portrait failed to sell at auction, but the AGO made its money anyway: the piece sold privately that same day for $10,000. In industry parlance, the Romney was deaccessioned. Its accession number, 2433, will never again be attached to a work of art at the gallery.

An increasingly steady stream of deaccessioned art is flowing into auction houses. Permanent collections are no longer permanent: Masterpieces are being stripped from gallery walls and etchings removed from acid-free mounts and shipped off to auction houses or other institutions. While museums eagerly publicize new works coming in the front door, few like to talk about what’s going out the back loading dock. Often cloaked in secrecy, disposal can ignite publicity firestorms when handled badly. “Deaccessioning can get very greasy, dirty and mean,” DeWitt says. “People attack each other’s legacies, and raise doubts about connoisseurship. It gets really nasty.”

Canadian galleries have been largely shielded by their cautious approach, says deWitt, but scandals abound in the art world. Some institutions are performing the cultural equivalent of burning the furniture to heat the house, selling off masterpieces to pay down debts or renovate. The magnificent collection of the Detroit Institute of Arts came within a whisker of being deaccessioned during the city’s recent bankruptcy. In 2014 the Portuguese government demanded funds from the sale of 85 Joan Miró paintings to pay down debts created by the works’ former owner, a nationalized bank. A public outcry halted the sale at the last minute. And last year the borough of Tower Hamlets in England won a bitter court case after a now-disgraced mayor tried to sell Henry Moore’s “Old Flo” for an estimated $40 million to plug holes in the borough’s budget.

The highest-profile scandal occurred at the Delaware Art Museum in 2014. The gallery, swimming in red ink after a disastrous expansion, decided it had to either sell art or close. Brushing aside criticism as well as advice, and without consulting its curators, management took down four beloved works, including Winslow Homer’s Milking Time. The gallery paid off a US$19.8-million debt and funnelled money into an operating endowment, but its reputation was left in tatters. The Association of Art Museum Directors sanctioned it, and other museums shunned it. Sadly, Delaware’s example is unlikely to be the last. Last fall, Venice’s mayor mused about settling some city debt by selling pieces ranging from a Klimt to a Chagall. “A lot of people think they are the first ones in the history of museums who thought up the idea of deaccessioning paintings to pay for the boiler,” says DeWitt. “The problem is that you’ve got business people who see an asset [on the wall]. They are perplexed as to why you can’t monetize it.” 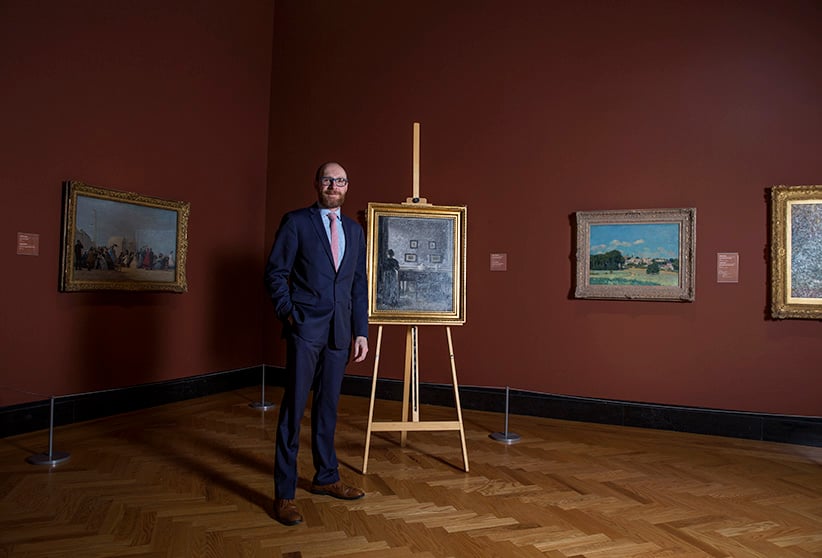 The AGO’s Lloyd DeWitt shows off the Vilhelm Hammershøi painting bought, in part, with money from the sale of deaccessioned art (Photograph by Kayla Chobotiuk)

Done correctly—which means plowing the money raised back into new works—curatorially motivated disposal can revitalize a collection by stripping out inferior or less relevant works. In 2014, the Georgia O’Keeffe Museum auctioned three works—one sold for US$44 million—so it could fill gaps in its collection, while last year the Metropolitan Museum of Art, in the midst of redoing rooms of decorative art, sold off swaths of unwanted items to finance new acquisitions.

At the AGO, DeWitt and his colleagues follow industry guidelines as well as a publicly available policy of how to select items—often less desirable works shut away in vaults for decades—that go through layers of approval. The policy dictates the funds raised must be used to acquire “similar but superior objects.”

In Britain and Europe, the practice of  “trading up” is still frowned upon. “Collections are seen as almost sacrosanct,” says Alistair Brown, policy officer of Britain’s Museums Association (MA). There is also the fear that today’s decision-makers may not always know what tomorrow’s treasures will be. In 1775, an inspector at the Oxford University Museum wanted a distintegrating stuffed bird thrown away. Luckily the garbageman saved the head and a foot; they turned out to be the only remains in existence of the long extinct dodo.

If there is a name that rivals Delaware for top spot on the contentious deaccessioning list, it’s Northampton, England. Needing money for renovations, the borough council there, treating its museum like a piggy bank, picked out a 4,500-year-old Egyptian statue of Sekhemka to sell. Except the museum didn’t have clear title. The donor’s descendant, the 7th marquess of Northampton, dug up original records and asked for Sekhemka back, reportedly settling for 45 per cent of the $32-million sale. Northampton was disbarred from the MA. Funding and valuable grants vanished. “There was a real fear in the sector that this was going to become completely out of hand,” Brown says. Two years ago, the MA set out exacting guidelines; financially motivated disposal is to be allowed only in “exceptional circumstances.”

Sometimes needs are more prosaic. Five years ago, when DeWitt was tasked with the deaccessioning initiative, the AGO’s vaults were bursting. A full deaccessioning had never been undertaken and, as he explains, the AGO, like many museums in the early 20th century, had inherited entire homes’ contents that would arrive in moving trucks, direct from a benefactor’s address. So while J.P. Bickell gave the AGO a valuable J.M.W. Turner watercolour, he also handed over decorative pieces such as a fishing boat scene by Theodor Weber that sold for $3,450 in 2014.

The first preference is a new public home for pieces. The AGO sends illustrated lists to other museums, and even ships the works to be examined in person. While other departments have placed items, DeWitt has had success with just one: “a beautiful little anonymous portrait” of Henri Quetton St. George, one of Toronto’s founders, now nestled within the city’s own collection.

For a curator, the most time-intensive part involves tracking down donors or their relatives or foundations to inform them of the deaccessioning. The decision rests with the gallery, but DeWitt says he’s always nervous when the AGO can’t find anyone: “There’s a nagging suspicion that you’re exposing the institution to a tiny bit of risk.” Such was the case in Alberta in 2011. Calgary’s Glenbow Museum, following detailed protocols, including transferring unwanted Indigenous artifacts to First Nations and public museums, sent a few hundred Aboriginal items to auction. First Nations groups decried the sale. The Glenbow retrieved unsold items and cancelled future auctions, explains collections VP Melanie Kjorlien. All deaccessioning stopped there.

Outside the Glenbow, the trend continues. At last year’s Canadian Museums Assocation conference, DeWitt’s deaccessioning session was disconcertingly popular; an deaccessioning toolkit for museums is expected from the group by the summer.

What is largely left out of deaccessioning is the public. It’s difﬁcult to find out which items are leaving collections, except for the odd press release or auction catalogues. The Indianapolis Museum of Art is an exception. It has a searchable online database (currently listing 6,199 disposed items). Most aren’t so open. In fact, the Georgia Museum of Art garnered criticism from the art world a few years ago when it sought public input before deaccessioning four works by Bernard Smol. After the vote, it kept two, including the one the public liked most.

In Toronto, DeWitt’s vault-clearing is near an end. Last year, the curator used deaccessioning money to buy a major work by Danish artist Vilhelm Hammershøi, Interior With Four Etchings. A few decades ago, his tranquil works were unknown to much of the world. A curator in the 1970s might even have thought the artist’s work decorative rather than important, and put one on a disposal list. Now Hammershøis can fetch millions. In a final nod to the funds that helped purchase it, the ID card of the AGO’s painting will list the donors of those deaccessioned items who helped, indirectly, to buy it. For some, it will be the first time their names appear on an AGO wall.