At the Vancouver Biennale, art you can’t avoid 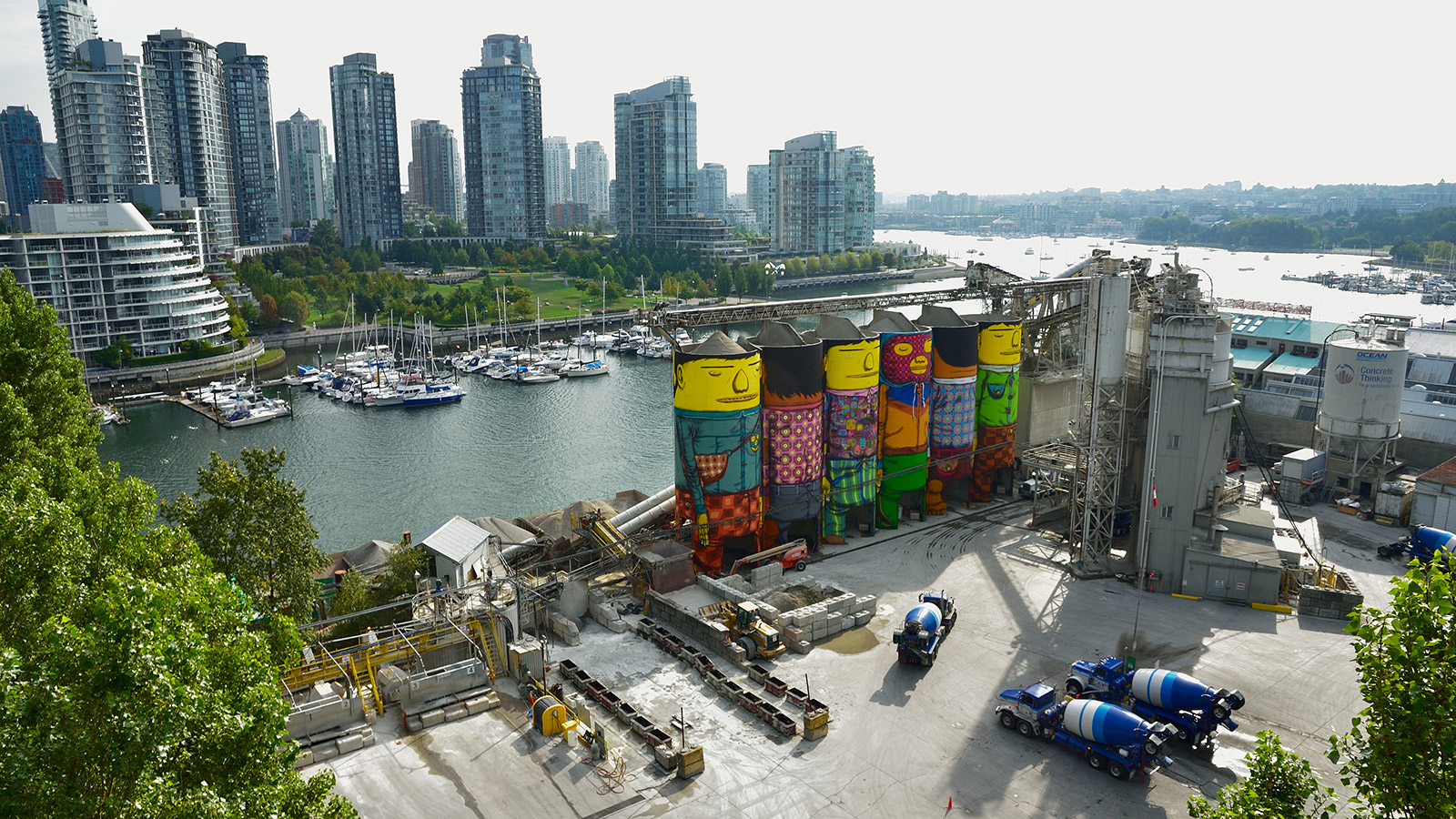 The Brazilian artists known as Os Gêmeos (“the twins” in Portuguese) haven’t touched the Walkie-Talkies provided them in Vancouver. They never will. When painting, Octavio and Gustavo Pandolfo, identical twins from São Paulo, communicate without speaking, a kind of telepathy. They never work apart, and move as one across their concrete canvas, with no plan, no design. Their kaleidoscopic, high street art style hits Canada for the first time this month, with a massive, four-storey mural over six concrete silos at Vancouver’s Granville Island, part of the city’s ongoing Biennale, on until 2015.

The Pandolfos are bona fide art stars in the tradition of Jean-Michel Basquiat, with brand collaborations with Nike and Hennessy, gallery projects from London to Tokyo, and legendary quirks. Their roots, however, lie in graffiti and their hearts belong to the form. Encouraged by artistic parents—their first cans of spray paint were gifts from their mom—they became obsessed with graffiti after seeing the seminal book Subway Art. They photocopied every page, labelling the colours on the copied black-and-white-pages so as not to forget.

Their fantastical counterpoint to São Paulo, the sprawling, concrete megalopolis of 20 million, is a mystical realm they call Tritrez. There, the rivers are multi-hued, the fish “have colours and lights,” and “you can touch whatever you want,” they explained as they worked on their Granville Island piece. This shared, Seuss-like dreamworld is where the twins—magic realists in the Latin American tradition—believe they came from, and where they will return when they die.

This makes them a perfect fit for the Vancouver Biennale, conceived to give contemporary art a wider audience, sometimes by placing it on popular walkways, where it literally cannot be avoided. Try, for example, to get your kids off the giant, technicolour jellybeans on the city’s Seawall, the work of filmmaker Cosimo Cavallaro. At Spanish Banks, Hugo Franca’s chimerical, driftwood furniture begs to be sat on. “Art isn’t an elitist game. But it’s become that,” laments Biennale founder and president Barrie Mowatt, an art world player with working-class roots. “We’ve isolated people from great art.”

The Biennale, which will drop dozens of sculptures in the Lower Mainland over the next two years, has sparked some of the city’s more lively artistic conversations. In the first three weeks of its 2010 run, Miss Mao T
rying to Pose at the Top of Lenin’s Head, by China’s Gao brothers, prompted a news story every single day. In it, a tiny Mao Zedong, sporting a lovely pair of breasts, walks atop the grotesquely large, seven-metre chrome head of Lenin. The controversy was tame compared to what Dennis Oppenheim’s upside-down church (Device to Root Out Evil) stirred in 2008.

Mowatt, who launched the Biennale a decade ago, began collecting in his twenties. While hitchhiking Canada at the height of Trudeaumania, he sought out A.Y. Jackson and A.J. Casson in Kleinburg, north of Toronto; Mowatt talked them into selling him two paintings apiece, which he paid off in $25 installments. He never looked back.

He and his partner, lawyer Don Buschlen, launched an eponymous gallery from their West End Vancouver apartment. Buschlen-Mowatt, in a city saturated with paintings of mountains and trees, charted its own course, importing major American abstract works. Their meteoric rise was cruelly interrupted in 1992. Buschlen, just 34, died from AIDS-related complications. Mowatt, in a grim twist, was fighting colon cancer at the same time: “We battled for our lives together. I got to be the lucky one,” Mowatt says, choking back tears.

Three years ago, he sold the gallery to focus on the Biennale, which grew from a sculpture project honouring Buschlen’s memory. To its growing legacy, Os Gêmeos will soon add their candy-coloured mural.