From Run the Jewels to Owen Pallett, Adrian Lee and Michael Barclay name their five favourite albums from 2014 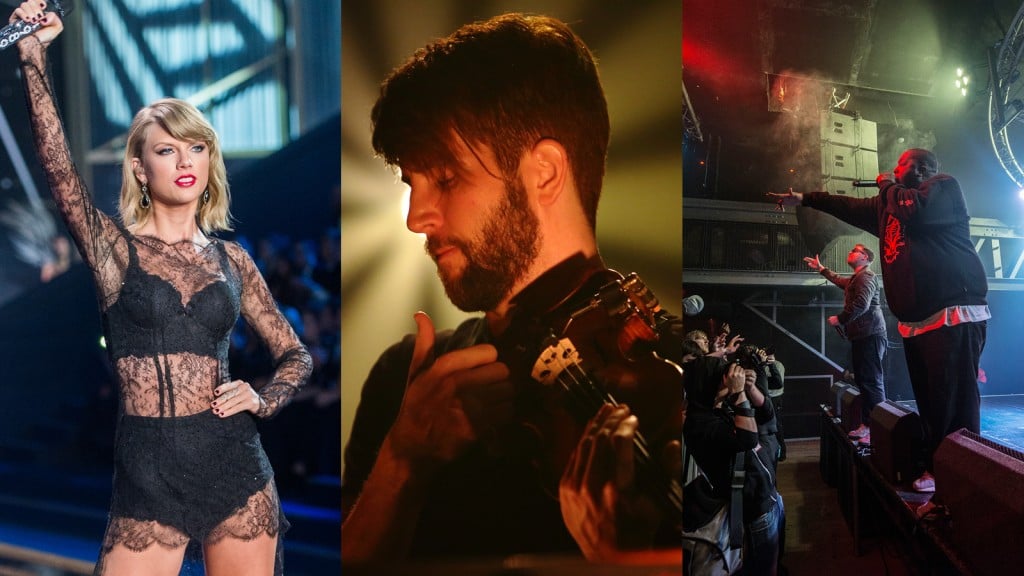 Taylor Swift, Owen Pallett, Run the Jewels all make our Best Of Music list for 2014. (Illustration by Sarah MacKinnon.)

2013 set the bar high as far as music is concerned—smash records from some of music’s biggest stars, a singable feast of new musicians making good on their promise. But with the end of the year truly near, 2014’s actually looking a whole lot like 2013: major releases from superstars, ascendent youth being served, and even an out-of-nowhere end-of-year release from a big-name R&B star that blew everyone away. Adrian Lee lists his five favourite albums from the year that was, while Michael Barclay names his top five Canadian records, as part of our Best of 2014 web series looking back at the arts and culture from the year that was.

It seems improbable that Run the Jewels—made up of two rappers, Killer Mike and El-P, on the razor edge of their late-30s, after long, slogging, on-and-off careers in a young man’s genre—would spend 2014 putting out some of the most important music of the year. And yet here we are. Killer Mike, all Southern drawl and brassy charisma, flings his considerable weight behind each verse, careening with animalistic glee. El-P, his beats sleek and denting and his rhymes subtly surgical, is quietly getting his due as a master of his own craft. But it’s their chemistry on the mic together, chucking Molotovs at institutions and funnelling righteous anger at villains, that reminds you of the almost punk ethos that helped hip-hop along in its early days, and that makes this so vital. So when El-P boasts that he and Mike are the “top tag team for two summers,” it’s with a nod to Kanye and Jay Z’s hyped, ultimately boring collaboration Watch the Throne—and a reminder that actually, these guys are way better, because they actually like each other. Wild, indeed. It’s subversive without being paranoid, concussive without being a headache, wise without being out of touch; it’s the soundtrack of a bloody uprising. Hip-hop is punk music again.

2. D’Angelo and the Vanguard – Black Messiah

There’s plenty of genius on this album, this surprise-but-not-really from a man we thought a ghost—though it’s D’Angelo’s first since 2000’s Voodoo, it’s been in gestation, mostly complete, for at least four years. So that’s where the genius starts: the fact that this simmering cauldron of soul has been on rolling boil for years but still feels like a document of these racially fraught times. There’s also the genius of the idiosyncratic drums and guitar work that sound plucked from the brain of J. Dilla, Voodoo‘s deceased muse; the genius of its Sly and the Family Stone influences, crafted to sound like tomorrow; the genius that Betray My Heart is actually a superior take on Voodoo‘s Spanish Joint; and, yes, the genius of that gorgeous voice, swooping and crackling like a molting butterfly. At the end of its 12 songs, too, there’s some disbelief that we waited 15 years for 55 minutes—but against all odds, it feels almost worth it. And of all the genius laden in this album, perhaps the biggest stroke was that decision to drop it out of nowhere after 14 long years, to manage expectations. Without hype, Black Messiah is given the berth to clear any hurdle on the strength of its brilliance alone.

Life is too short, goes one meme, to pretend not to like Taylor Swift’s catchy songs. And rightly so: for all of this writer’s crooked smiles at the idea that this was ballyhooed as Swift’s first pop album, when truly her last efforts pulled country to pop’s centre and featured her only-middling vocals on dubstep bolts, this is a coherent package of glossy earworms that’s much better than the mere sum of its parts, the album that Fun. (the band) wouldn’t have the believable earnestness to pull off.

That’s not enough for some people, though essential pop songs get little due for their craftsmanship—and these are not songs wanting for craftsmanship, each buzz and Eighties synth flourish in their precise place. But for those who insist their arts consumption must reveal themselves as something higher (read: vague pretense), consider this argument: 1989 is perhaps the truest instance of Instagram as album, of the way we curate ourselves into a meticulous narrative, carefully choosing the right things to reveal and the kindest filter to do it in (Valencia, probably.) It’s almost Warholian, in that way; it’s a perfect cultural capsule of our times.

Schoolboy Q’s wildchild debut album Oxymoron is deserving of more praise than it’s received thus far, a quality bridge during a fallow time for music, but also a victim of its January release date. But it isn’t the best thing that Top Dawg Entertainment, the L.A. rap clique led by the prodigal Kendrick Lamar, has done this year. That praise goes to the 23-year-old Isaiah Rashad, the hungriest and most surprisingly soulful artist on the Top Dawg roster. He’s not a good singer, but he’s a deeply assured one, nowhere more so on the beautiful, wailing West Savannah. He’s a strong lyricist and good storyteller, but never at the expense of the buoyant cadence and the dreamy, weird musicality that both define the South. It has all the hallmarks of 2013’s revelatory mixtape from Chance the Rapper—a confident, young, unique voice making a name with a coherent album-like piece—and by the end of the 14 tracks, you realize that Rashad’s calling this a demo not as an expectation-lowering apology, but more as a bold statement of art, a promise of big things to come.

Of all the songstresses this year to play with tremulous pop minimalism and a slinky voice—and there were a fair few, including an under-recognized effort from Jessie Ware—the L.A. native’s debut was the most keenly felt. Atop growling, industrial-edged production and resonant bass, Banks floats above, an icy-voiced ghost in the machine, baying curses at former flames and idiot lovers. It doesn’t get much better than the sultry, spiralling This Is What It Feels Like, where she sounds like a fully-formed, less-seething heir to The Weeknd.

The biggest Canadian stars in the world are the ones that sound like they could come from anywhere. But our best artists sound like nobody else—anywhere. Such is the case with this odd couple, who invent their own genres, subvert all expectations, and in 2014 released their most fully realized recordings to date. Pallett, an Oscar-nominated composer and touring member of Arcade Fire, has evolved from his days as a solo, looped-violin act into one of the most sophisticated figures in pop music since Kate Bush—because, like Bush, his most outré avant-garde leanings are always couched in melodic songs, given an extra punch here from a rock rhythm section. Tagaq, conversely, only flirts with melody fleetingly: her strength and power arise entirely from texture and rhythm, both emanating from the elemental core of her being—an inevitable outcome of her chosen vocal style, Inuit throat singing. On Animism, she—with violinist Jesse Zubot and drummer Jean Martin—conjure hallucinogenic, fantastical soundscapes at once tantalizing and utterly terrifying. Pallett’s album works both on the surface as a pop album and on deeper levels with close listening; with Tagaq, you’re either in or you’re out, and nothing else in 2014—anywhere—came close to being as equally demanding and rewarding.

Yes, this young Calgary band has a terrible name. But listening to this ambitious album, it’s not clear that a more easily memorable moniker would do any better a job of describing what they do: a Bee Gees strut here, a Weezer pop song there, some Spoon on the side, maybe a spooky psychedelic ballad or a stomping folk song thrown in for good measure. There’s even a (most likely unintentional) nod to ’90s Toronto art-punk legends Change of Heart on here, even though no one in this band is over 25. Where do they go from here? Anywhere they damn well please.

A guitar-wielding, folkie Canadian singer-songwriter who writes timeless pop songs: our musical history is full of them. 2014 was no different, with worthy new albums from—among others—Doug Paisley, Jennifer Castle, Amelia Curran, Oh Susanna, Neil Young, Shane Abram Nelken, Bry Webb, Fred Eaglesmith and Chad Van Gaalen. But Afie Jurvanen, the man who calls himself Bahamas, is hitting his artistic and commercial stride on his third album. Here, his late-night, wine-soaked seduction comes on strong, while he downplays his guitar-hero potential to situate himself quietly between the grooves. The song is the thing, and Jurvanen is not a show-off. He doesn’t need to be.

The co-founder of Broken Social Scene has built a career out of crafting coherence from chaos. On his second solo album, Drew dials down his guest list and gets intimate. He still writes some soaring anthems, but he’s at his best in this album’s quietest moments, where his growing strength as a producer of Daniel Lanois’s caliber—especially the side of Lanois heard on that artist’s own fine 2014 album, Flesh and Machine—come sharply into focus.

The Montreal master was one of two 80-year-old singers in the Top 10 this past September. Tony Bennett was doing yet another album of jazz-era standards, this time with Lady Gaga in tow in an act of mutual exploitation. Cohen, of course, needs no gimmicks. He’s still writing new songs that stand with the best of his already formidable songbook, and the endless touring that fuelled his comeback has, against all odds, made him a better singer than he ever was. Popular Problems falls slightly short of the masterpiece that was 2012’s Old Ideas, though cowriter and producer David Leonard is back on board to orchestrate Cohen’s new take on sparse, soulful blues.