Comedian thanks fans for their loyalty, patience and courage 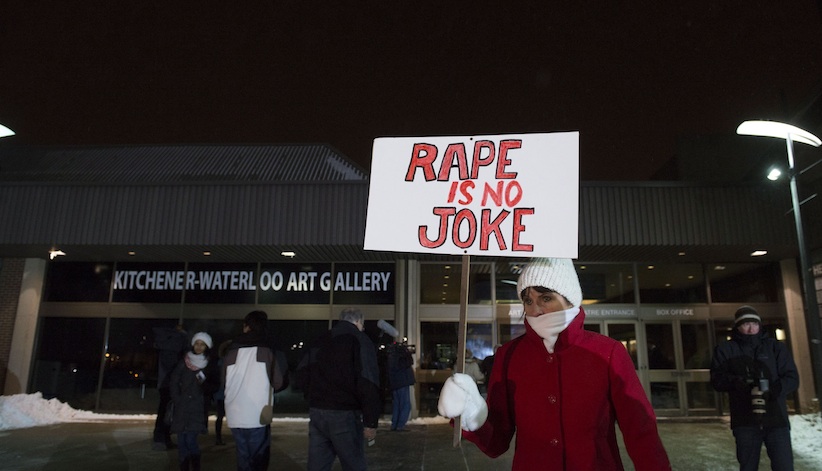 Protesters outside the Centre in the Square in Kitchener. (Hannah Yoon, CP)

LONDON, Ont. — Bill Cosby was forced to publicly confront the sexual assault allegations that have dogged him for weeks when a heckler at the second stop on his three-city Canadian tour yelled out a direct accusation.

“You are a rapist,” the man shouted on Thursday night as he was removed from the theatre in London, Ont., as the audience started to tell him to be quiet.

Cosby paused midway through a joke and stood up, asking the crowd not to react.

“That’s all right,” he continued as the man was escorted out by police. “Patience.”

One audience member yelled out “we love you” to Cosby before the comedian sat back down and continued on with his routine, which was interrupted a minute later by a round of applause.

The same heckler had earlier yelled out “we don’t love you” while Cosby was on stage, to which the comedian responded with “OK” before carrying on with a joke.

The heckler’s comments created the most tense moments of a show which had begun with ticketholders having to make their way into the venue past protesters who asked them why they supported “an American rapist.”

Security at the venue was heavy, with bags being searched, ticketholders being patted down and a strict zero electronics policy in effect inside the theatre.

The venue was also sparsely populated, with many empty seats. A few ticketholders also appeared to leave during the show.

Cosby did appear at one point to make light of the controversy he’s facing.

When a woman got up from one of the front rows and walked past the stage, Cosby asked her where she was going. When she said she was going to the lobby to grab a drink Cosby responded with a line heavy with innuendo.

“You have to be careful about drinking around me,” he said to loud applause.

Cosby is facing a slew of sexual assault allegations — in recent weeks at least 18 women, including three who came forward in Los Angeles on Wednesday, have accused him of sexually assaulting them, with some claims dating back decades.

The 77-year-old comedian has never been criminally charged in connection with the allegations and has denied them through his lawyer.

The allegations — and Thursday night’s in-show heckling — didn’t appear to bother audience members who gave Cosby a standing ovation at the end of his performance.

In a statement released through his publicist after the show, Cosby acknowledged the “one outburst” that had taken place but called his fans “loyal, patient and courageous.”

“I thank you, the theatre staff (Budweiser Gardens), the event organizers and the London, ON Community for your continued honour and support,” he said.

Many leaving the theatre said Cosby had handled an uncomfortable situation with aplomb.

“It didn’t ruin the show at all, it was a great show,” said Sofia Saeed. “He calmed everybody down, he was a gentleman.”

Saeed added that Cosby deserved the benefit of the doubt.

“We are living in a democratic society. You are innocent until proven guilty,” she said. “The guy is just trying to make a living and do what he does best.”

Others who chose to skip out on the show felt differently though.

Karen Ann Bridge was one of them. The 50-year-old had bought tickets to go see the comedian in London with her family but changed her mind about attending after the barrage of allegations against Cosby came to light.

“I don’t think I could ever watch a show from him now without that being at the back of my mind,” said the 50-year-old. “These are just allegations but they still don’t sit with me well … Women don’t lie about these things.”

Protesters who stood on the steps leading into the venue on Thursday night echoed Bridge’s feelings.

“Why is he here when he’s suspected. He should not be here and making money off of us. It’s wrong,” said Nadia Panton, who stood in the snow holding a sign.

Cosby is scheduled to perform in Hamilton on Friday, the last of his Ontario shows. A protest was being planned outside that performance as well.