Protests and a standing ovation for Bill Cosby

Kitchener show goes on, despite allegations in the spotlight 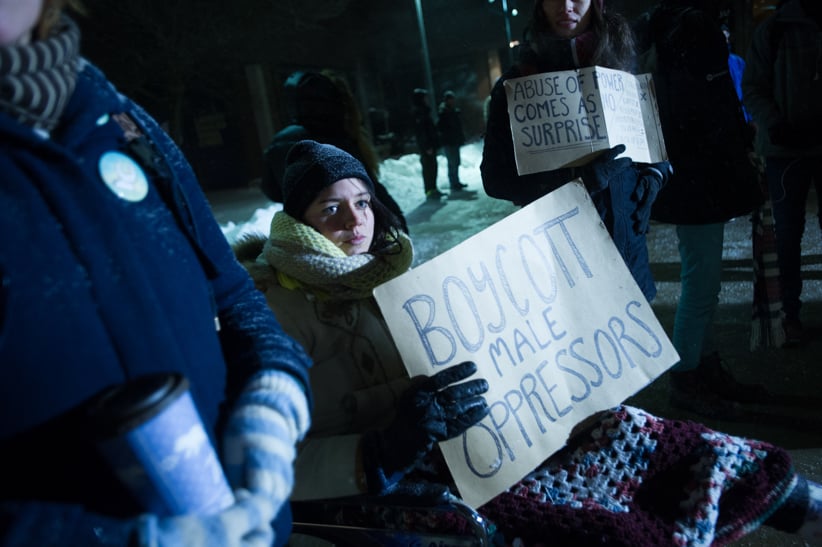 On a day where three more women came forward with allegations that Bill Cosby drugged and sexually assaulted them decades ago, bringing the number of accusers with similar stories to 30, more than 1,500 fans in Kitchener tried to help the famed comic it laugh it all off.

Cosby took the stage at the Centre in the Square to warm applause just after 7:30 p.m., in his first public performance since mid-November. Wearing a hoodie emblazoned with the message “Hello Friend,” he thanked the crowd and segued right into a bit on Canada’s extreme winters, drawing appreciative hoots when he donned a silly, ear-flapped hat. Outside the theatre, a couple of dozen protesters stood shivering in -20C temperatures, holding signs with slogans like “Rape is no joke,” and “He said: 1, She said: 26+.”

The Kitchener show, the first of three Ontario dates (Cosby is set to appear in London on Thursday night and Hamilton on Friday) had been the subject of controversy for weeks. Both the venue and the artist were clearly concerned things might turn ugly once he hit the stage. Before the show, as two giant screens displayed a picture of a smiling Cosby and Nelson Mandela, an audio recording periodically warned patrons to “remain calm” in the event of a disruption and not to confront any protesters. Uniformed police and security were stationed conspicuously throughout the theatre, and the house lights remained up throughout the performance. Yet there was no hint of trouble — beyond the half-filled rows, and large number of empty seats.

Cosby has made only a few brief comments to the media since scandal enveloped him last fall, asserting his innocence but refusing to discuss the allegations in any detail. This week, his spokesman politely refused a Maclean’s request for an interview. On Wednesday night, there were moments on the stage where it seemed he might be working toward some sort of pronouncement —“I have an announcement to make,” he teased near the end of his set — but the serious quickly gave way to the silly. In addition to the weather, Cosby talked about God, drunk uncles, childhood beatings, ungrateful children, his harping wife and the indignities of getting old. Pretty much everything but the elephant in the room. The crowd giggled and laughed at each gentle punchline and goofy face. He left the stage shortly after 9 p.m. to a standing ovation.

Prior to the show, the scene outside wasn’t quite so avuncular. The waiting domestic and foreign media — running the gambit from the Associated Press and NBC to ETalk and This Hour Has 22 Minutes — far outnumbered the protesters. When the camera lights were turned on, they sparked some uncivil exchanges between Cosby’s fans and those who would be his conscience. “You’re supporting rape in our community!” shouted one young woman in a yellow toque. “How about not talking to people in a rude fashion, you little wench?” was a middle-aged man’s retort. Another woman stood near the theatre doors, clutching a Tim Hortons coffee, calling out “Shame. Shame on you all.” She refused to discuss why she was there, or give her name. Eventually, venue security came out and shooed the circus back 100 feet onto the public sidewalk.

Cosby still has his defenders. Phylicia Rashad, the actress who played his wife on his hit ’80s sitcom The Cosby Show, gave an interview earlier this week where she dismissed the allegations, now dating back more than four decades, as some sort of vast conspiracy. “Forget these women,” she said. “What you’re seeing is the destruction of a legacy. I think it’s orchestrated. I don’t know why or who’s doing it, but it’s the legacy … Someone is determined to keep Bill Cosby off TV.”

If so, they’re doing a good job. Since the scandal has picked up steam, both NBC and Netflix have cancelled development deals for new television projects and retro channel TV Land went as far as to pull reruns of his iconic sitcom. Cosby, once the most-beloved comedian in the United States, seems to be running short on safe spaces. More than a dozen shows on his current “77” tour (named after his advancing age) have been cancelled or “indefinitely postponed.” The Chicago-based promoter of the three Ontario shows, Adam Troy Epstein of Innovation Arts & Entertainment, has indicated he wishes he had been able to do the same.

“In no uncertain terms, the men and women of IAE condemn physical violence in any form,” it began, providing the names, phone numbers and addresses of women’s shelters in each of the three cities. Noting that the act of promoting, or hosting a concert, is not necessarily an endorsement of the artist, Epstein added that legally, he really had little choice but to let the shows go on, lest he face “crippling” financial penalties. “IAE has been informed by Mr. Cosby’s representatives that he has every intent to perform these events. As such we are honouring the terms of the contracts signed by all parties so as to not be in breach, which we fully understand is an unpopular, but undeniable fact.”

No one in Ontario wants to be seen putting out the welcome mat for the man who was once America’s favourite dad. Several local politicians in Kitchener, including Mayor Berry Vrbanovic and MPPs Catherine Fife and Michael Harris, chose to attend a “Voices Carry” fundraising concert for area women’s shelters Wednesday night, rather than the comedy show. London Mayor Matt Brown has urged the cancellation of Thursday’s tour stop. And Hamilton Mayor Fred Eisenberger has thrown his support behind planned protests— inside and outside the theatre — on Friday. Even Premier Kathleen Wynne has been drawn into the fray, suggesting that people in the province might want to think twice about giving the entertainer their money. “There are very serious allegations against this man,” she said Tuesday. “Until those are sorted out I would certainly not go to a performance.”

On the morning of the Kitchener show, the local daily, the Record, featured a hand-wringing column that asked how residents would greet Cosby. “Will the folksy TV legend be greeted with open arms in this bastion of Bavarian good fellowship, or shamed into submission by a community unwilling to tolerate an alleged rapist in its midst?” The issues to be weighed and balanced, it suggested, included freedom of speech, presumption of innocence, and a potential civic reputation as “eager-to-please pushovers.”

The answer was something more muted. On the day of the show, the Kitchener page for Kijiji.ca carried a half-dozen listings for tickets— from people trying to unload them at well below face value, as well as a couple from diehard fans seeking bargain seats. It spoke volumes that there were a large number of empty seats for a show that was officially close to a sellout.

Cosby’s website lists 21 more concert dates through spring, although from his vantage point up on stage he must now be able to see the looming end of his career. Flanked by security guards in a half-filled, well-lit room, he tells the same old jokes and gets the same old laughs. But it’s not much fun, and he’s not so funny. Outside, in the cold dark, the past is stalking him.