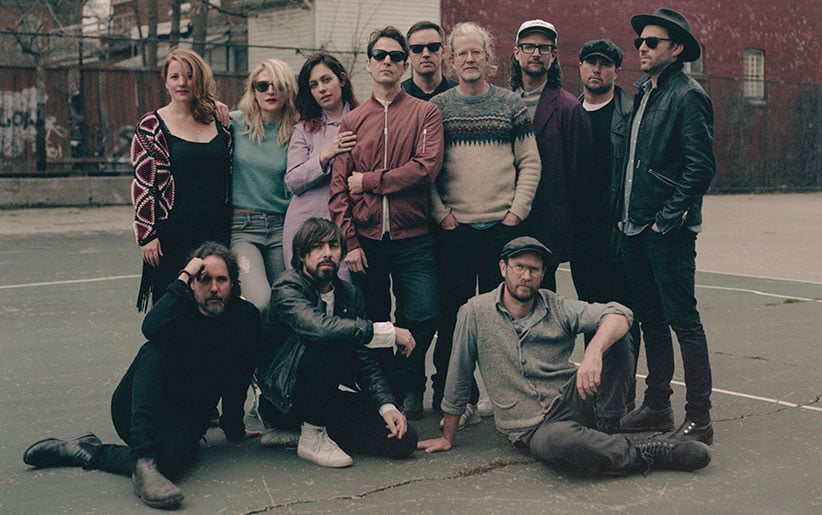 What do you do when the world’s crumbling all around you? If you’re Toronto indie-rock collective Broken Social Scene, you call your friends and do what you do best: make some joyful noise together.

In the seven years since their last record, lots has happened for the band that helped usher in a wave of smart but accessible indie rock in the early aughts: kids were born, parents passed away, members’  bands and solo projects—including Feist, Metric, and Stars—enjoyed their own successes. Schedules became hard to juggle. Many fans figured the band’s hiatus, announced in 2011, would be permanent.

But in recent years, the group—which can include up to 20 members onstage—began to reunite for the occasional live show, and are back with the just-released Hug of Thunder, a characteristically epic new album that pairs the band’s fist-pumping, all-hands-in-the-air energy with pointed but hopeful lyrics befitting our current times.

“I don’t think anyone in the group believed we finished what we started out to do,” explains bassist Brendan Canning, who founded the band back in 1999 with singer-guitarist Kevin Drew. “With Broken Social Scene, you’re on a mission. And the mission wasn’t finished.”

Canning’s sitting with Drew and fellow early member Charles Spearin at the Rivoli, a mainstay Toronto bar, to discuss the new record. The three, who’ve known and played music with each other for the past two decades, are like brothers, exchanging playful jabs and finishing each others’ sentences. But they also bring their distinct personalities to bear in the group: Drew the mercurial, heart-on-sleeve frontman who rallies the troops; Canning the sardonic veteran who keeps his cool and steers the ship; Spearin the calm, positive spirit whose studio serves as an incubator for BSS’ musical ideas.

Even a simple question about what ultimately brought the band back together results in a comedy of errors. Drew recalls feeling an urgency to reunite following the attacks on the Bataclan nightclub in Paris in 2015, but also insists a call from Spearin spurred things along—something Spearin laughingly says he doesn’t remember.

Here’s where they do agree: They were, at least at first, a bit hesitant to make a new record. Though the many members of BSS have always remained friends through the band’s many ups and downs, like any big family they’ve had their issues to sort through, often exacerbated by the rigours of touring or recording.

Throw those many different personalities and temperaments into the mix when sardined into a tour bus or studio, not to mention the web of relationships the band members have with each other (some going right back to high school), and over the years those tensions have occasionally built towards a breaking point. Drew, emotional at the best of times, seemed particularly frustrated by the challenge of trying to keep everyone happy and on the same page—both personally and creatively.

But time has a way of lending perspective to the things that once felt like they might tear even the closest of clans apart. Drew, Canning and Spearin, who started what would become BSS in their basements back in the late ’90s out of the sheer enjoyment of playing music together, were reminded that no matter how much things continue to change all around them, the enduring bond and creative alchemy between them and their fellow BSS mates remains the same. At a time when both personal and political anxiety seemed to rule the day, drawing close those who mean the most felt like an act of renewal.

“I think we could see the future of us disagreeing, and it’s exhausting,” Spearin quips, looking at Drew. “It’s like, ‘Oh, my God, can’t we just be friends for a while?’ ”

“Okay, ‘arguing’ is not the right word,” Spearin concedes.

“We have very long conversations” during the recording process, Drew explains.

Once the call to the BSS army went out, everyone was ready to re-enlist. Boston producer Joe Chiccarelli served as head cheerleader—he’d been bugging the band for years to make a new album and helped corral the many musical ideas that go into any BSS record.

Hug of Thunder isn’t just a welcome return, but one of the band’s strongest offerings to date, featuring the massive rock guitars, blasts of brass and indelible harmonies the group is known for while also shining a spotlight on members’ individual strengths.

While Drew has long been the face of BSS, the band’s female star power has always been its secret weapon—an ace that’s played expertly on Hug of Thunder. Feist contributed the hushed but immediately catchy title track, while Metric’s Emily Haines shines on the timely “Protest Song.” New vocalist Ariel Engle (who, along with her husband, longtime BSS member Andrew Whiteman, performs as AroarA) feels like a perfectly natural addition to the BSS universe, her striking vocals taking charge on two of the album’s best tracks, “Stay Happy” and “Gonna Get Better.”

“It’s a profound honour. Leslie [Feist] and Amy are two of my dearest friends. When we get the chance to sing together—stare into one another’s eyes at a show—it’s a double rush,” Engle says. “It’s the juxtaposition of the day-to-day intimacy of close friendships transposed to a rock show that lends to an otherworldliness.

“I hear everything that makes up the band on this record—from the horn lines, to the depth of sonic textures, the basslines that are songs in themselves, Kevin’s inimitable lyrical style … It feels like a real celebration of everyone.”

That’s a tricky thing to manage, with 17 members listed in the liner notes—all with their own strong ideas about what should make the final cut. Figuring out how to be creatively democratic can be half the battle.

“We start with the casual honesty, and then try to find what we can get behind the most within some of those ideas,” explains Drew. “We write anthems, and we always have. But we’re also all producers in this band. We all know how to produce.”

“I mean, I think that’s who we are as individuals,” Canning adds. “There’s no big ‘this is the game plan.’ We already know what the blueprint is: Get together, make music.”

Easier said than done when your band also includes many artists who are busy making their own music: Feist released her latest album, Pleasure, this spring; Spearin’s band Do Make Say Think came out with an album last month; Haines and Stars also have new records due this fall. Drew’s even debuting his first play in November, the “rock fable” A&R Angels, at Toronto’s Crow’s Theatre.

“We haven’t ‘reunited’ because we have never stopped being forever friends,” Stars vocalist Amy Millan, who has sung with BSS since the early days, says from her home in Montreal. “We have been open with the idea that you have to fight for community—love is challenging, friendships are complex, chemistry is constantly changing and history can be painful, but connection is sacred and forgiveness is everything.

“If the world worked a little more in the pathways of these themes, we would be better for it.” 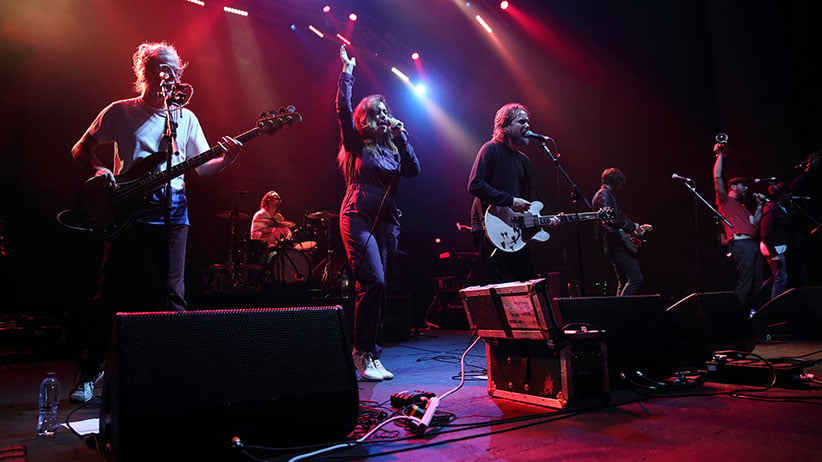 Nearly twenty years since they began, the band has also had a ringside seat to the disruption of the music industry. The record label they helped found, Arts & Crafts, is still going strong, and there’s plenty of anticipation from fans for the new album and subsequent tour. But in a crowded market where many of Broken Social Scene’s peers from the indie-rock boom are back in the fray—from Arcade Fire to Grizzly Bear—even established acts like BSS are left wondering where they fit in.

“The value [of music] has changed immensely,” Drew points out. “It’s something that, with this band—we’re not an upper-class band, we’re not a lower-class band; we’re in the middle, which is gone—it’s logistically and financially very, very difficult. It just is. It’s not an easy task.”

“I’d prefer to think of music as priceless, rather than not having value,” Spearin counters.

“Well, music is priceless,” Drew agrees. “You know what I’m saying—music is one of the most valuable things in the world, But the way it’s consumed has changed. So that just changes people’s mindframes.”

What hasn’t changed, Canning offers, is what drew BSS to making music in the first place. He says on their recent run of shows in Europe—the band was the first to play a show in Manchester following a deadly terrorist attack on an Ariana Grande concert there, an experience all agree was surreal but cathartic—he kept hearing how the band’s music has brought people together, from their songs soundtracking couples’ weddings to young fans moving to Toronto just to experience the city the group is so strongly associated with.

“Weaving in and out of people’s lives—it’s just music, but you wake up one morning, you hear a song and you can be moved in so many ways,” Canning says.

Broken Social Scene has never been an overtly political band, but in an era when resistance can be as basic yet profound as the Golden Rule, perhaps the biggest statement of all is a reminder that we’re all in this together.

“I think the fact that we’ve all made it back together is a wonderful showing of unity within this time. That was the greatest move we could make—beyond the music, beyond the record, just that we were all still here,” Drew says.

“I feel like when we’re a band, we’re out there and we’re connecting with people. We have something that’s worth giving—even something as simple as just the kindness of friendship that we can display,” Spearin adds.

“There’s something about it that feels like it’s a contribution, and I think maybe other bands feel that as well. If you can play music you love with people you love, for people you love, what more can you ask for?”