The Building: A Calgary parkade redesigned with the future in mind 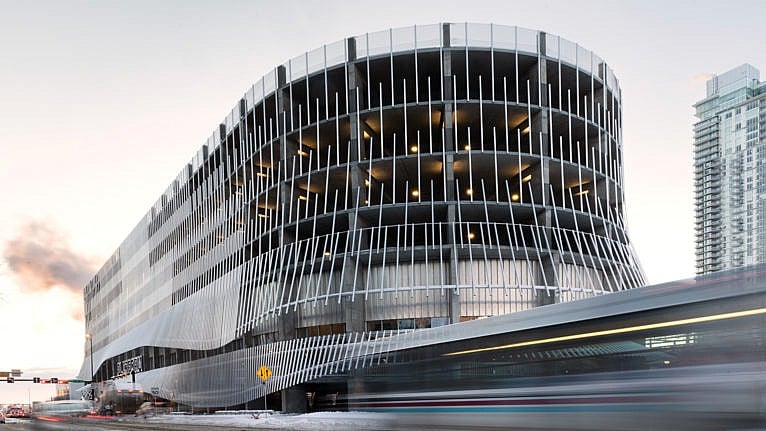 Few buildings are designed not to stand the test of time, but Calgary’s 9th Avenue Parkade was always headed for a reno. Initially, at least, the seven-storey complex—which opened last year—was built to fill a dire need for parking in Calgary’s East Village, home to the city’s National Music Centre and its busy Central Library. (Neither has its own lot.)

But with the rise of remote work, and local industry expanding well beyond oil and gas, Kate Thompson, president and CEO of the Calgary Municipal Land Corporation, says the question of future-proofing became central to the parkade’s blueprint. One day, if those 510 spots weren’t needed to house cars, perhaps they could house residential or office space—both of which are in high demand.

The contract for the aluminum-clad convertible garage was awarded to the tag-team of Calgary-based firm Kasian and Winnipeg’s 5468796 Architecture. Sasa Radulovic, co-founder of 5468796, says that a future metamorphosis was always factored into the parkade’s layout. “We had to weigh all design decisions, not only against the current use, but against any other uses we could imagine,” Radulovic says. 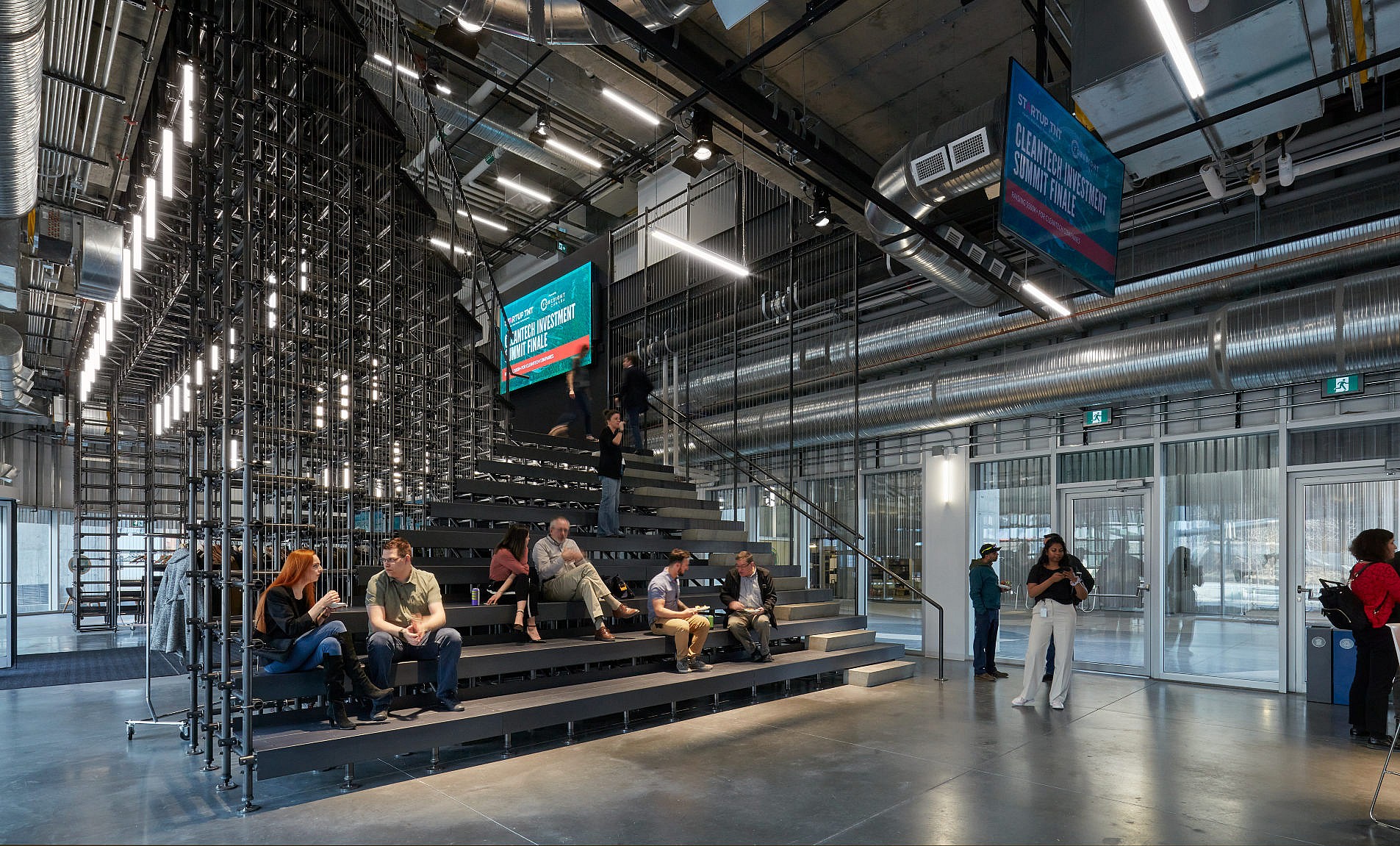 Local start-ups like Showpass, Benevity and Neo Financial have all hosted team events in the ground-floor meeting space. (Photography by James Brittain)

The steep slopes of a typical parking garage make adaptations difficult, but the Calgary parkade’s gently ascending corkscrew shape means each floor can be flattened without a full-blown demolition. A ground-floor courtyard spans the length of the building, giving it a top-to-bottom openness that lets in plenty of sunlight. It lends itself nicely to Radulovic’s vision for the project: a “Cathedral of Cars.”

The $80-million build had one major complication: an underground LRT line required the middle of the parkade to be hoisted up on trusses. At ground level, the Platform Innovation Centre hosts workshops for tech start-ups in 55,000 square feet of designated meeting and classroom space. Just outside, traffic guides—in the form of mounted mirrored half-spheres and concrete balls—add a playful visual.

Exactly how long the parkade will exist in its current form is a million-dollar question, says Radulovic, though the architects have ballparked a lifespan of 30 to 50 years. If their prediction is correct, the 2,000 hollow aluminum pickets that give the parkade’s exterior its shine could be reused as balcony guardrails or melted down and, like the structure they initially guarded, transformed into something else entirely. 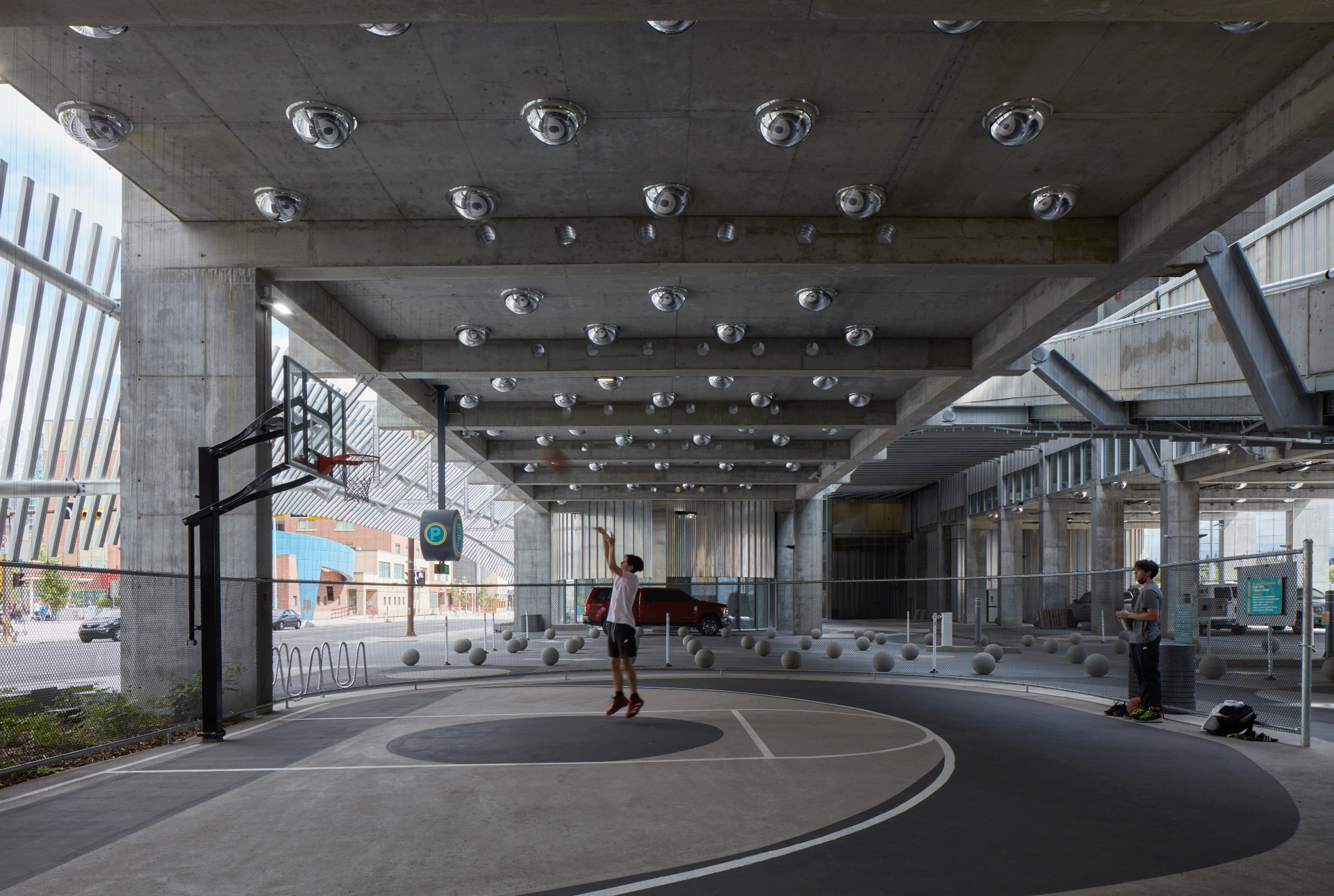 The parkade’s ground-level basketball court was created to enliven the streetscape. Sparkes says it’s used all the time. (Photography by James Brittain)