The faith and reclamation in Justin Bieber's redemption tour

Justin Bieber's stripped-down show in Toronto was another logical step in his efforts to redeem himself—not that it mattered on this particular night. 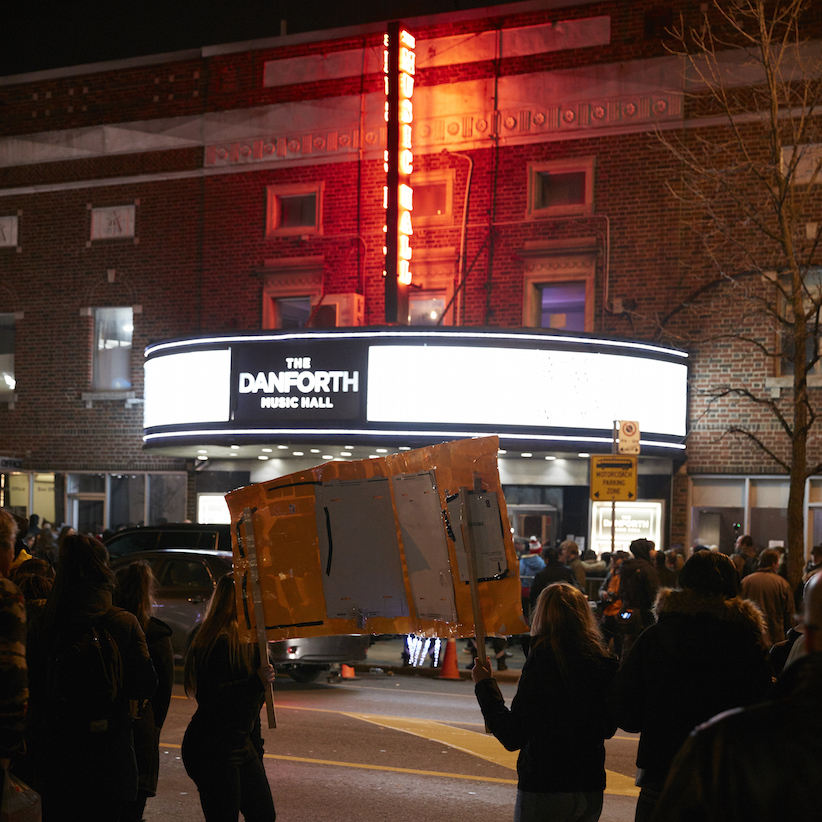 For an immediately sold-out concert featuring one of the world’s biggest pop stars, the scene outside Toronto’s venerable Danforth Music Hall on a brisk Monday night was downright placid. Police horses, inexplicably still deployed in 2015, clomped about. Corporate vendors played Top 40 hits as 1,500 people filed into the intimate space. There was the occasional expectant shriek whenever the door on the trailer parked outside opened—and sometimes, a car sliced slowly through the road with its windows down, its riders lobbing insults at those bothering to support him—but the preamble to Justin Bieber’s one-night-only acoustic show was a peaceable affair.

Across the street, 18-year-old Jessica Theocharides clutched a patchwork Bristol-board sign, lovingly festooned in taped-on cut-out photos of Bieber, headlines snipped from magazines, and one remarkable note: “Justin Bieber visited me in Sick Kids and inspired me to beat cancer.” In 2009, Theocharides was diagnosed with leukemia, and was receiving treatment when Bieber visited, offering kind words, a hug, and an autograph.

“It was such a dark period of my life, and it was probably the ultimate low, in the hospital being 12 and fighting cancer,” she said. “When he visited, it made me happy for 10 minutes, and it was this uplifting point—it was only up from there.” She’s now cancer-free, she said, radiant.

She didn’t even have a ticket; her hand was cold to the touch. But here she was, waiting for hours outside the venue in December temperatures, just for the chance to touch the hem of Bieber’s garment—or even just glimpse him—at this, the latest event on his redemption docket.

Hers is the kind of fervour that Bieber inflames—and the kind that non-Beliebers see as undeserved. Despite pop-chart success and worldwide celebrity, the 21-year-old has spent the last few years careening between public embarrassments. He’s urinated on an image of former U.S. president Bill Clinton, egged a neighbour’s house, pleaded guilty on dangerous driving charges, been arrested for drag racing, and been sued over alleged assault by his bodyguard.

And so, of course, the image rehabilitation has begun. His Comedy Central roast was the first chapter of his redemption narrative; his latest album, Purpose, is a long, bloated apologia, mixing serpentine EDM synths with self-flagellating or defiant lyrics. He’s speaking openly again about his religion, and on Purpose‘s cover his head is bowed, hands clasped in prayer. “An Acoustic Night with Justin Bieber,” then, is the next logical step: an unplugged, intimate performance is a classic way to showcase a musician’s artistry—while masking their demons. The fact that the show’s proceeds went to Bieber’s hometown charity, the Stratford House of Blessing, makes it almost too perfect a redemption act.

And redemption was surely the show’s theme. The set’s second song was “I’ll Show You,” one of Purpose‘s most absolution-minded tracks. “I’m not perfect. I’m gonna keep falling down,” he told the crowd. “But I’m going to keep getting up.”

Related: What is Justin Bieber apologizing for, exactly? 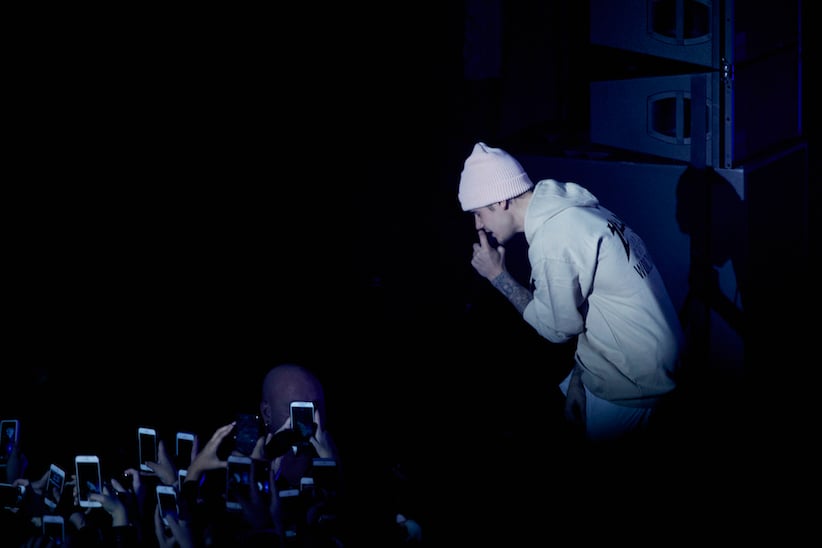 It was a freewheeling hour-and-a-half, complete with lyric-forgetting on “Christmas Love,” along with covers of Tracy Chapman’s “Fast Car” and the Beatles’ “Let It Be.” People even tried to hush others in the crowd—before quickly giving up—as if they were at a coffee-house open-mic. Yes, the night had a coffee-house feel—but one where the musician could ignite seismic cascades of shrieks and raise up a garden of cellphone cameras just by approaching the edge of the stage’s tectonic plate.

As a performance, though, it felt perfunctory. His voice occasionally whistled around the notes—a sign of a big-stage singer ported to a smaller space, still singing like it was an arena. And despite efforts to widen his appeal with a more mature sound, Bieber couldn’t help but stumble into the juvenile. At one point, he asked the crowd how many girls were 14—before greasily counting the statutory years: “So only, one, two, three, four more years ’til… you know.” Later, he urged the crowd to shout, “We love you, Justin.” The show’s final song was, fittingly, “As Long As You Love Me.” For someone claiming to seek renewal, this looked like Bieber the conceited scamp, not Bieber the redeemer. 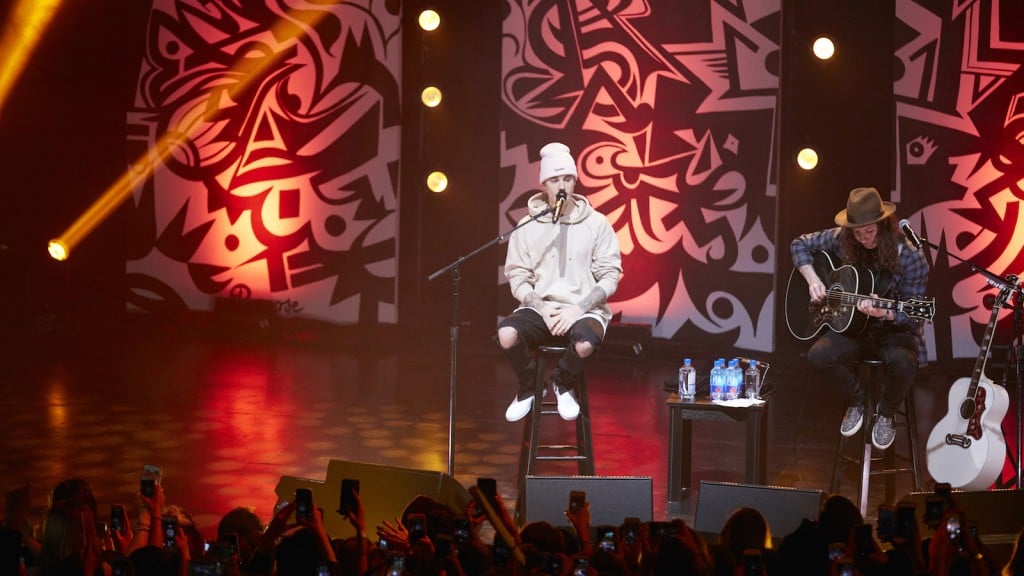 But it may be a presumption that Justin Bieber really needs redeeming. He is, after all, only 21, and grew up knowing only fame and its alien expectations. And for those in the music hall, redemption was the last thing on anyone’s mind. Just ask 16-year-old Raina, who wept into Bieber’s neck when she was chosen to be whisked onstage and serenaded. Just ask the teens who flitted around the venue, buzzing earnestly about the best moment of their lives. Ask the adults singing along to the songs of someone a decade or more their junior, gleeful and unembarrassed. One teen even FaceTimed the show to her mother at home—a mom and daughter watching Bieber sing, their faces beaming at each other as they were beamed through the phone.

Outside the hall, redemption barely mattered, too.

“For me, he doesn’t really have to redeem himself,” said Theocharides, the cold, grateful girl who stood outside before the show, hoping and wishing. “Even though he went through a low period, I’ll always be there to support him. It’s a turning point for him in his career that shows everyone that you can bounce back from something so low. I think he’s done an amazing job.”

That’s the thing about redemption. It’s rooted in faith, and faith is expressed—inchoate, blind, and often inexplicable—in deeply personal ways. So to some, that faith can look like it’s being rewarded with a mawkish branding exercise, a cynical rehabilitation of an image. Or it can look like an 18-year-old, who takes care to mention how many months remain before her next birthday in that way only the young do, standing in the cold just to pay back the bit of shine that a pop star lent her in a hospital. It all depends on your side of the street.