Can the xx mark a new spot?

The xx became adored for their intimate sound. What will happen when they loudly shift away from their defining quiet? 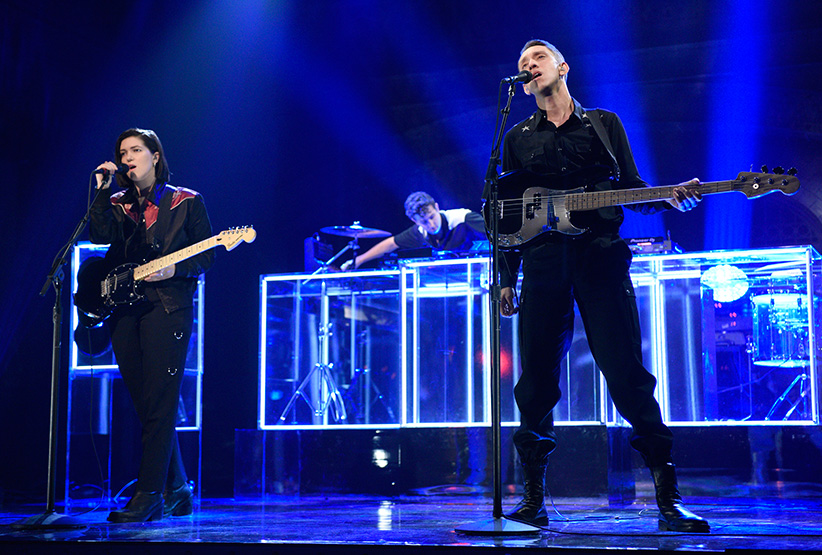 “I can’t hold on to an empty space,” sings the xx guitarist Romy Madley Croft on “On Hold,” the first single from the British band’s much-anticipated third record, I See You, out Jan. 13. But right away, she’s wrong—because empty space is exactly the secret of her band’s success.

The multi-million-selling trio wrote the songs on their 2009 debut album in their bedroom. That’s not unusual; everyone’s gotta start strumming somewhere. What is weird is that those beautifully sparse songs—full of empty spaces, in other words—barely changed between the moment of inception and their inclusion on an album that would go on to sell more than a million copies around the world, winning Britain’s Mercury Prize in the process. The xx were roughly 20 years old when that happened, a trio of shy new-wave teenagers with a soft spot for ’90s R&B, their haunting guitar lines and hushed vocals draped over subsonic bass and skittering beats. It turned out to be a unique, winning formula that sounded like nothing else in the mainstream at the time.

So it was even weirder when it went mainstream: sampled by both Rihanna (“Drunk on Love”) and Drake (“Take Care”), covered by Shakira (“Islands”), used as a theme by the BBC for their 2010 election coverage, officially sanctioned in some ads and blatantly ripped off for others. Not to mention that one of 2016’s biggest pop hits, the Chainsmokers’ “Don’t Let Me Down,” sounds so much like the xx that bassist Oliver Sim told the CBC that several members of his family asked if he had played on it.

What was most remarkable about both 2012’s Coexist and the new album is that the xx have somehow stayed true to the intimacy and uniqueness of that first record and expanded on it without losing the initial charm, even as they played for bigger and bigger audiences. (They debuted two of the new songs on Saturday Night Live back in November.) That purity of vision dates back to when they first signed to XL Recordings, home of Adele and Radiohead. The label’s in-house recording engineer, Rodaidh McDonald, was given three CDs of the group’s output to date: one was titled “Early Demos,” one was “Recorded in Rehearsal Space,” and one was called “What Producers Did Wrong.” “They’d worked with about four other producers before then that had—and no discredit to them—I guess they’d seen a lot of space to add a kind of stamp on,” McDonald told Sound on Sound magazine. “But we [thought] the best stuff was the most sparse. The intimacy of the early demos was the important thing.”

But where the xx’s self-titled debut album was recorded on a 12-track board in a corner of the label’s offices, the new album—again made with McDonald—was recorded in three different countries and is, sonically, much bigger sounding though no less intimate: Madley Croft’s reverb-drenched guitar still rings out over Sim’s sparingly employed bass lines and beats by Jamie xx (né James Smith), which draw from elemental hip-hop and early ’80s dance music. It amplifies all their strengths, and now the mainstream has moved closer to them; they’re no longer outliers.

It’s a happy ending that was never enjoyed by the xx’s most obvious antecedent, Young Marble Giants. That trio from Cardiff, Wales, only released a lone, albeit highly influential album: 1980’s Colossal Youth, a polar-opposite antidote to the punk and new wave of the day, using only a primitive drum machine (often performing as little more than a metronome), choppy guitar, melodic bass, and the shy vocals of Alison Statton. The likes of Kurt Cobain, R.E.M., and David Byrne have sung their praises; their songs have since been covered by Courtney Love’s Hole and Belle and Sebastian. The negative space employed by the xx comes directly from Young Marble Giants’ template—and that band broke up after one tour and never made a second album. Even when they reunited in 2007 to promote a deluxe reissue of Colossal Youth, they realized any attempts at writing new material together paled next to the innocent charm of that debut. A second Young Marble Giants record would only have sullied the singularity of the first.

When musicians of any genre adjust the sound for which they’ve become beloved, it can cause rancour among their fans—but especially when that sound relies on intimacy, a quiet voice that makes you lean in and pay closer attention.

Michael Timmins knows a thing or two about this. Thirty years ago, his band, Cowboy Junkies, recorded The Trinity Session in a Toronto church for $250; the somnambulant collection of originals and country covers, originally released on the band’s own independent label and later re-released on BMG, would go on to sell 1.5 million copies around the world, despite the fact that it was so far removed from not just mainstream rock and country but even the rest of the alternative scene—in tempo, in volume, and certainly in the way it was recorded, during a decade of technological excess. It sounded as different in 1987 as the xx’s debut did in 2009. In the book Have Not Been the Same (which I co-authored), Toronto musician John Borra says, “They [had been] playing at [small Queen Street venue] the Cameron with all sorts of totally counterculture bands. I remember walking into a Second Cup, hearing them on the radio and thinking, ‘This is one of the weirdest bands I’ve ever heard on some easy listening station.’ ” In 2009, a fan of the xx probably had the same experience in a grocery store.

Now that The Trinity Session is considered a classic album—it won a Polaris Heritage Music Prize last year, and is being reissued in a deluxe vinyl set for its 30th anniversary—it has cast a long shadow over the Junkies’ career, for better and worse. “The albatross is that everything we do is compared to Trinity,” says Timmins. “ ‘This isn’t as good as Trinity.’ Or, ‘This is the best thing since Trinity.’ But the obvious benefit is that at least there’s one album of ours out there that people keep comparing us to—most bands never get that. It’s pretty great that 30 years later people are still referencing that record.”

The Cowboy Junkies were not spring chickens when they made the record; it was their second album, they’d toured North America on a shoestring budget, Timmins and bassist Alan Anton had lived in London and New York, and they were all in their mid-twenties. So when the music industry started paying attention to this strange DIY anomaly, of course the impulse was to have them adhere to dominant norms. “The very weirdest advice from every single label that pursued us was that they all wanted us to re-record Trinity Session, to go into a studio and do the same songs with a producer,” he says. “Which was great for us, because it made it clear to us that [those people] had no clue what they were talking about. The reason [fans] are excited about this is the recording itself, that’s part of the charm of this thing, so let’s just continue doing what we do and use the reach of these [industry] people the best we can.” The Cowboy Junkies did eventually turn up their amps as their sound evolved. “Now we’re a lot louder than we ever were back then,” says Timmins. “It’s just the band evolving.”

The same can be said of Iron & Wine or Bon Iver, two acts of the mid-2000s who sold hundreds of thousands of copies of acoustic records (Iron & Wine’s 2004 album Our Endless Numbered Days, Bon Iver’s 2008 debut For Emma, Forever Ago). Each act hit the road, however, with large bands that pulled the music in several different directions—and upped the volume—in ways that put off some fans who just wanted to be sung to sleep. None of this is new: there are more than a few Bob Dylan or Joni Mitchell fans who wish those artists had never strayed from their acoustic beginnings.

Great Lake Swimmers’ Tony Dekker experienced some of this too, albeit on a smaller scale. His 2003 debut, in part inspired by The Trinity Session, was recorded in an abandoned grain silo near the tiny Lake Erie community where he grew up. Over the next five records, Great Lake Swimmers slowly evolved into a more commercial, full-band folk-rock sound; some older fans prefer the simplicity of that first record, and Dekker himself put out a solo record under his own name in 2013 that was as stark as his debut. “Really good records exist in their own worlds, and regardless of what comes before or after, the thing remains intact in its own world,” says Dekker. “There are artists that I love and listen to regularly with whom I do not keep current, but I return to some of their earlier works—or later works, for that matter—works that I still enjoy deeply, and I maintain respect for them as artists even if they change.”

Rodaidh McDonald says expectations could have suffocated that first xx album. “I think if we’d known it was going to have this impact and if those expectations were put on us when we were recording, it would’ve ended up sounding completely different, and then it might not have been the album that everyone likes,” he told Sound on Sound. “The evolution of it has been the important thing.” By being clear what they didn’t want from the very beginning, the xx aren’t about to bow to any expectations but their own.

FILED UNDER: Editor's Picks The xx