Can Yannick Nézet-Séguin save the Metropolitan Opera? 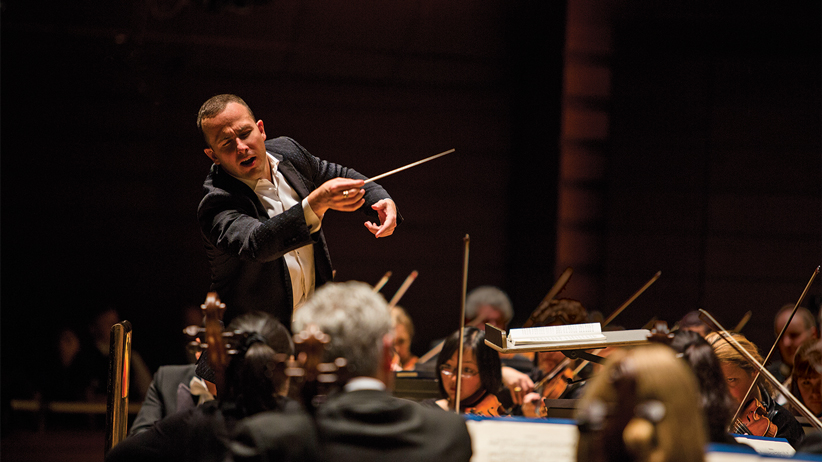 Yannick Nézet-Séguin with the Philadelphia Orchestra

The Metropolitan Opera wanted Yannick Nézet-Séguin, and it was willing to wait for him. Yesterday the leading U.S. opera company announced that the Canadian conductor would take over as musical director, but not until 2020, because he’s booked up solid until then.

Peter Gelb, the general manager of the company, said that they were actually lucky to get him that early, and he’s probably right. Star musicians have their schedules filled up years in advance, so the arrangement—Nézet-Séguin will conduct two operas a year until 2020, and five a year after he’s able to do the job full-time—seems pretty good. Because its longtime conductor, James Levine, has been in and out due to health issues, the Met has been forced to do without a full-time music director for some time anyway; a few years more won’t make much difference.

The waiting period will, however, give people lots of time to speculate about what Nézet-Séguin will bring to the company. One question is whether he will expand the range of works the Met performs, and in what direction. Because opera is so expensive and difficult to put on, the longtime problem of classical music—the endless recycling of popular old warhorses—is even greater. It’s extremely hard to put on a recent opera or even an older opera without a lot of name recognition. Nézet-Séguin admitted just last month that he’s “still at the stage when I enjoy so much broadening my repertory and the orchestra’s,” so it may be too early to say what operas he will try to champion. But people will be expecting him to try and find some non-standard operas to champion, whether it’s a contemporary work or one of the many underperformed 19th-century works.

But the issue for an opera conductor is not just what gets played, but how much power he has in an institution that is only partly about the music, and which is too big for one person to control in full. Levine became famous in part because he was able to increase his power at the Met. Before he was appointed music director, the Met was not really known as a conductor’s house at all; the power was held by the general manager—celebrity martinets like Rudolf Bing—and by the star singers whose names sold tickets. After he was appointed music director in 1975, the young Levine tipped more of the balance of power and fame toward the conductor, and he was well respected as an orchestra trainer, turning the orchestra into a major selling point of the house.

Under general manager Peter Gelb, the balance of power—or at least the way the public perceives it—has shifted a bit more toward the non-musical side of the house. Part of that is simply that Gelb is a good self-promoter, who gets himself into the papers more than his predecessors; he’s also tried to bring in more of the “modern” European style of production (which isn’t all that modern any more) as much as he can without alienating the U.S. audience. (An example of this was Gelb importing a production of Verdi’s La Traviata with a spare, symbolic staging; conservative by European standards, it was almost radical for the Met, which until quite recently was dominated by the lavish stagings of Franco Zeffirelli.) Levine’s age and illness has meant that Gelb dominates the news about the company and its future.

But the company needs more than a new aesthetic approach; it is going through one of those periods of budget cuts and sluggish ticket sales, and the appointment of a conductor as admired as Nézet-Séguin may help to create the perception that it’s getting back on track. It may also help with the fundraising: The big difference between the Metropolitan Opera and the great opera houses of Europe, like Milan’s La Scala or the Vienna State Opera, is that those houses get big state subsidies, while the Met does not. This has the advantage of making the Met more responsive to public taste than some of its overseas counterparts, but it also makes U.S. musical life most responsive of all to the tastes of wealthy patrons.

So one reason Nézet-Séguin is such an ideal choice for the Met is that he’s been through this before. When he took over the Philadelphia orchestra, it had just recently gone through bankruptcy, and he had to throw himself into the process of asking rich Philadelphians for donations. According to Paul Wells’s report from last year, he performed brilliantly in this role: “Donations are higher than ever in the orchestra’s history, and this man who makes the most of any situation has found he adores the donor-circuit schmooze.” If he can do the same for the Met, the house will be in good shape—and he will displace Gelb as the central figure in New York operatic life. The test for a conductor’s fame and power is partly, though only partly, how well he performs when the music stops.