The selection of the folk singer has rankled some, but also earned comparison to the Nobel Prize recognizing Alice Munro 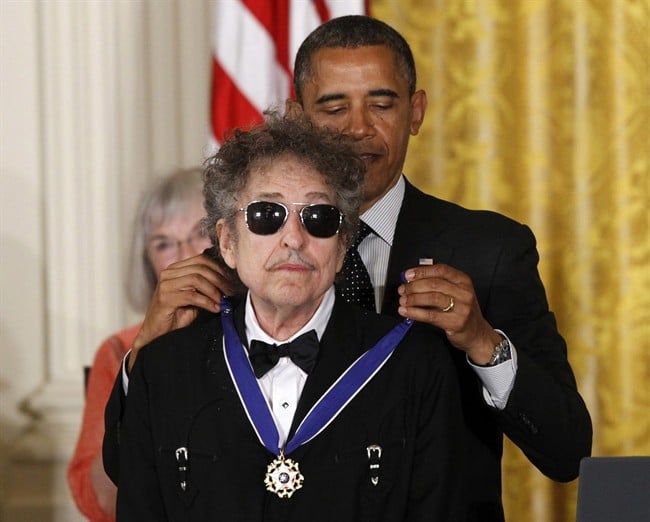 In this May 29, 2012, file photo, President Barack Obama presents rock legend Bob Dylan with a Medal of Freedom during a ceremony at the White House in Washington. (AP Photo/Charles Dharapak, File)

Several Canadian writers and musicians are praising Bob Dylan’s selection as the Nobel Prize winner for literature, but the pick is also rankling observers who question the categorization of lyricists alongside authors and poets.

The legendary singer-songwriter became the first musician to receive the award. Dylan is the first American to win the Nobel literary honour since Toni Morrison in 1993.

“Bob Dylan is one of the greatest poets of all time,” said award-winning, Montreal-based author Kathleen Winter, citing Dylan’s 1963 track “Lay Down Your Weary Tune” among her favourites.

“If we look at his lyrics and we look at the time span, and the social importance and the artistry, there’s no question of that in my mind. And I think if people are going to get their knickers in a knot over the fact that he’s also a musician I think it’s a bit small-minded.”

Legendary Canadian singer-songwriter Buffy Sainte-Marie said she spent some time with Dylan a few years ago backstage at a blues festival in Australia where they “had some laughs.”

In a statement emailed to The Canadian Press, Sainte-Marie praised his selection for the Nobel honour, saying the 75-year-old Dylan “should have received that award when he was 25.”

“Both the content and diversity of his music have always been astounding,” Sainte-Marie said.

“He’s maintained a real long career, which isn’t easy. And he’s still out there playing live all over the world. ‘Masters of War,’ ‘With God on Our Side,’ ‘Blowin’ in the Wind,’ and the personal attitude he carried represented freedom, creativity and individuality to a lot of people.”

Toronto poet Damian Rogers said her initial education in contemporary poetry was to read lyrics by the likes of Dylan and Canadian icon Leonard Cohen.

“For me, I think it’s embedded so early in my mind that poetry is an art that is very flexible and can be sung or spoken or read. All of these are completely legitimate forms of the art.”

Following Thursday’s announcement Sara Danius, the permanent secretary of the Swedish Academy, said Dylan “writes poetry for the ear” and that his works are “perfectly fine” to be read as poetry. But in the view of acclaimed Canadian author Marina Endicott, song lyrics don’t usually spring to mind when it comes to literature.

“His poetry particularly was strung together with music and indivisible from his music,” Endicott said from Edmonton.

She pointed to Tragically Hip frontman Gord Downie and rock group R.E.M as prime examples of musical poets but reinforced the importance of having a separate distinction for songwriters.

“I think there should be a Nobel Prize for music. Give songwriting a prize. That would be wonderful.”

Dallas Green said he fell in love with Dylan as a writer after reading the American icon’s memoir “Chronicles: Volume One.”

“Like a lot of people, when I heard (his music) I couldn’t get past the voice,” said the City and Colour songwriter.

“But after reading that book, I went in with a different mindset, and then the melodies presented themselves with the words — and that’s when I found it.”

Green said that as he has grown as a songwriter, so, too, has his appreciation for Dylan.

“I read this quote by Dylan once where he said — and I might be getting it a little bit wrong — that the song you wrote before is irrelevant. All you can do is hang on and hope that you do it justice. I think that I really love that.

“If you think about all of the life-changing, culture-altering moments that this man has had, and it still isn’t enough for him to stop.”

Queen’s University English professor Tracy Ware said he felt a mixture of “surprise and delight” upon learning that Dylan was receiving the Nobel.

“I can remember as a kid (when) ‘Like a Rolling Stone’ came on the radio, somebody would say, ‘Turn that off!’ There’s people who couldn’t stand his voice….

“I think it’s more of a minority, now that he’s got increasing respect for all of the different kinds of songs that he sings.”

Ware said the award is typically given to writers who have been involved in social causes. In that regard, he sees parallels between Dylan and Canadian author Alice Munro, who received the same prize in 2013.

“She’s my other great delight because she also has been a really private writer, gets involved in no causes, doesn’t sign petitions, doesn’t make public appearances. The prize simply went for her great talent — something that must also be true of Dylan.”

“Then he could tell these stories within three minutes that a lot of poets and rappers try to do, so by the end of that story, you relate to that lifestyle.”

“I’ve always said he’s my idol, but today is a different day because he’s being acknowledged as a scientist — a word scientist.

“The Nobel Prize is often connected to scientists and inventors, and I definitely think he is that person.”

— With files from The Associated Press.