The art that comes from bodybuilding and death-defying stunts 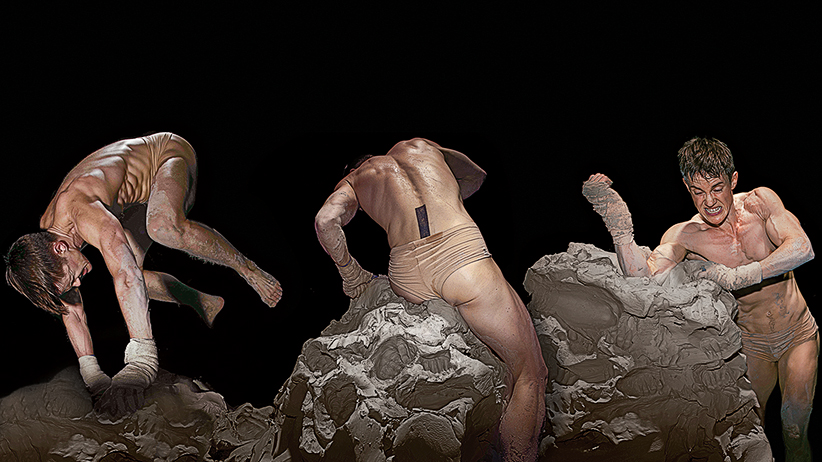 Performance artist Cassils does not take the phrase “suffer for your art” lightly. The Montreal-born Toronto native, who’s lived in L.A. for more than 10 years, has a CV packed with works that can be described as death-defying: Cassils has been lit on fire, endured near-hypothermic states and undergone radical weight changes in an effort to make passionate statements about gender, autonomy and empathy. “I see my body as a material, just like paint or clay,” says the artist, who was born biologically female, as Heather Cassils, but identifies as transgender and prefers the pronoun “they.” “I’m all about self-construction.”

That’s literally true: Cassils is a bodybuilder, whose physique is explored in works such as Cuts: A Traditional Sculpture—a project that had the artist gain 23 lb. of muscle in 23 weeks. Like Cassils’s five-hour performance piece Tiresias (in which the artist wears a piece of ice shaped like a classical sculpture) Cuts deals with notions of the male body. Both works are inspired by the artist’s day job as a bodbuilding trainer in Hollywood. Many of Cassils’s clients are actors who want to build muscle for roles. “Shortly after the Iraq war broke out these actors would come to me and say, ‘I just got cast as a soldier, can you make me look like one?’ ” Cassils recalls, from a studio in L.A.’s Echo Park district. “I watched the battle of Fallujah on 20 different monitors simultaneously, while blonds checked their heart rate for optimal fat burn.”

Cassils is also a trained stuntperson with a number of film credits. This fuelled 2015’s Inextinguishable Fire, a piece performed in London’s National Theatre, in which the artist was set aflame for 14 seconds (technical experts for The Dark Knight were consulted, and insurance was impossible to secure).

Cassils’s journey began with a childhood diagnosis of a gallbladder disease that stunted their growth. “I almost died during that period—the doctors opened me up and found out that my organs were rotting. It made me interested in understanding my own body and my mortality. I began to go to the YMCA and weight train at 15 because I was so tiny and weak.”

At 18, Cassils enrolled at the Nova Scotia College of Art and Design. “Major experimentation was happening.” Figure drawing classes were done with models bouncing on a trampoline. “Everything was played with. That notion of working within a system but working against a system still resonates with me.”

Eventually Cassils headed to New York, then L.A., and got a bitter taste of art-world fame in 2002 after being asked to be in a performance piece by Vanessa Beecroft, a veteran multimedia creator who now directs Kanye West’s tours. “There were masochistic rules for the models so I started a union,” Cassils recalls. “We all had to wear the same size shoe, so feet were compressed in small, tight heels. Her team did not tell us they would be removing all our pubic hair so when we sat down we were spread-eagle to the art world. I learned you can’t use a body of a person as a formal brushstroke. You can’t separate someone’s identity and just say that it’s form.”

Cassils’s star has risen since: a film at this year’s Sundance, a new work at L.A.’s Broad museum, controversy over a self-portrait—used for a poster for a travelling German exhibit called Homosexuality_ies—that was banned in German train stations. Cassils is contributing to exhibits in Vancouver, New York, Miami and Austria this summer while gearing up for a U.S. solo show—their first—this fall at the Museum of Fine Arts in Boston. A second solo show at Pennsylvania Academy of Fine Arts will include Becoming An Image, a critique of violence against LGBTQ people. There, the artist punched a 2,000-lb. lump of clay in the dark for hours, while a photographer snapped the action with a flash. The clay will be cast in bronze and staged at spots in Philadelphia where violent acts against LGBTQ people have occurred, a statement that unintentionally speaks to the Orlando massacre. “Our society has made strides with gender nonconforming people, especially in Canada,” the artist says, “but, in all honesty, we’ve just begun having enlightened conversations about being who we truly are.”