Talk about an icebreaker: The Canadian singer-songwriter joined the spaceman for a remarkable trip on a Russian ship, where he recorded a new album 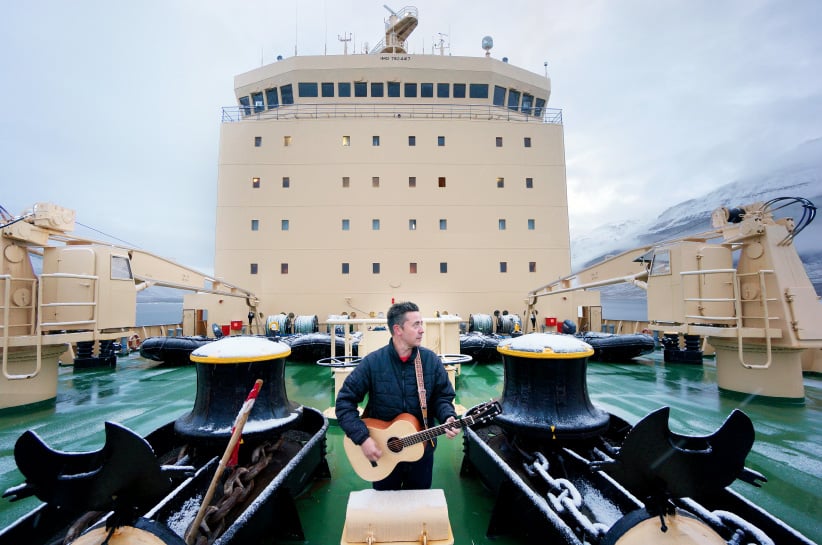 Danny Michel aboard the Kapitan Khlebnikov, an icebreaker where he recorded his latest collection of songs. His new album, Khlebnikov, is the result of a mission initiated by astronaut Chris Hadfield. (Danny Michel)

Recording music on a Russian icebreaker in the Arctic offers a unique set of problems—starting with the ever-present risk of death. When Kitchener, Ont.-based singer/songwriter Danny Michel made his new album, Khlebnikov, aboard the ship of the same name, he realized the water outside could freeze him in minutes, the helicopters on board were so old they had wooden floors, and that if he got left behind anywhere, he’d be lost forever. It took him until halfway through his 18-day expedition to let go of that fear: “Whatever,” he recalls thinking at the time. “What a great way to go!”

He did have to buck up: after all, the man who invited him on board was the first Canadian to walk in space.

Chris Hadfield had recorded his own album, Space Sessions: Songs from a Tin Can, on the International Space Station, and last summer, the retired astronaut and his son Evan brought Michel and a handful of other creative types, including writers, photographers, and videographers, to the most remote place they could find on the planet. Michel was an obvious choice: he’s more adventurous than your typical indie rocker, having recorded with Garifuna musicians in Belize (on 2012’s Black Birds Are Dancing Over Me), toured with David Suzuki, and interviewed a host of famed Canadian musicians on YouTube—including Hadfield himself—while driving around in his Star Trek-themed “Space Van.”

Still, the Captain Khlebnikov icebreaker took him to a new frontier. Michel is mulling over contacting Guinness about what may be the most “northern” album ever made, as he recorded up near the tip of Ellesmere Island. And while the premise may sound like a gimmick, the results are powerfully evocative of a place few people have the privilege of visiting. Michel weaves together the hushed, folky intimacy of his singing and playing with eerie, atmospheric field recordings taken on the ship, while later adding expansive strings and brass, and featuring Hadfield’s own Russian-language singing debut. Khlebnikov depicts the everyday reality on the ship, with its “hot soups and vodka shots,” juxtaposed with the awe-inspiring, harsh immensity of unforgiving nature.

“Being in such an unpopulated place, very raw and ancient and untroubled by external influence to a large degree, there’s an eternity to it, and a recognition that what you are seeing firsthand is rare in the human norm,” says the garrulous Hadfield, waxing poetic about the Arctic on the phone from his Toronto home. “That influences you.”

Hadfield and his son conceived of the Arctic expedition as an extension of their Generator series of science-meets-music-and-comedy variety shows at Massey Hall, and they were determined not to set a particular agenda—“because then, it’s very difficult to have an honest interplay of ideas,” he says. And while Michel’s Khlebnikov does expectedly touch on the effects of global warming, it offers a sense of wonder too.

But while Hadfield, with his astronaut’s perspective, says the experience reminded him how the world is “tiny,” Michel got the opposite impression. It hit him, he says, “just how enormous this planet is, and how beautiful and fragile. There were places where glaciers had receded drastically, and others where we would come across big, chubby, healthy bears on ice floes that were obviously doing great. We were in spots where I was told that only submarines could normally go: We would be the first human beings these bears had ever seen. It was a real gift to be able to witness them living the way they were supposed to live.”

For both Hadfield and Michel, making music was the best way to process the feeling of being isolated and untethered from one’s everyday life. On his first space mission, to Mir in 1995, Hadfield brought a guitar with him. “A NASA psychiatrist looked at that and realized, ‘Wow, music is important for mental health. We need to recognize that it’s not going to stop being important when people leave Earth.’” NASA put a small parlour guitar made by Canadian company Larrivée on the International Space Station in 2001; “it’s approaching 100,000 orbits,” notes Hadfield. He used that guitar to play David Bowie’s “Space Oddity” and to record Space Sessions, and Michel took a Larrivée on board the Khlebnikov.

MORE: Chris Hadfield on why the next mission shouldn’t be Mars—but the moon

Even with the compact guitar, the only place Michel could find to record was in his cramped cabin. “My poor roommate!” he says. “I MacGyvered a little set-up with gaffer tape and elastics and camera tripods, making stands for the microphones. I commandeered the bathrobes for sound baffling.”

He enlisted two dishwashers to sing a version of a melancholic old Russian folk song, and Hadfield contributed a song that sets some of Alexander Pushkin’s 19th-century poetry to music—verse that he had first read while learning Russian back in the ‘90s, in order to work with cosmonauts. 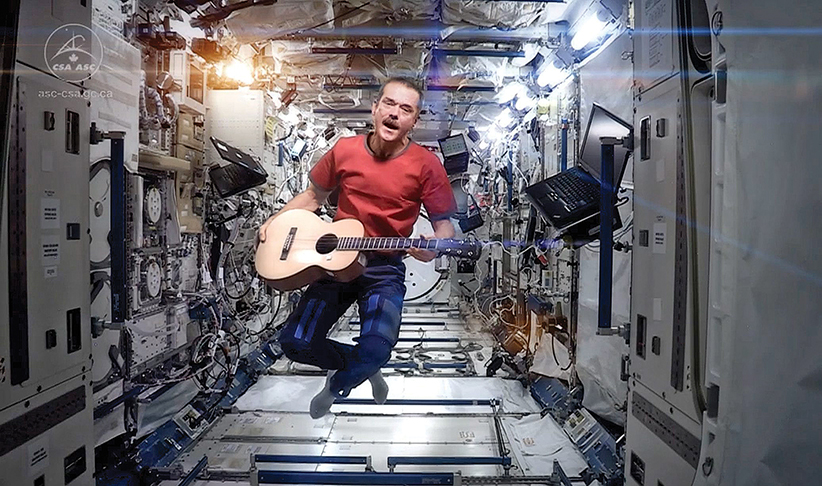 For Hadfield, the trip was about forging connections. He had epiphanies both while walking through “a huge meadow that was absolutely teeming with life, a necessary and beloved and ancient part of our world,” and while visiting people in hamlets such as Grise Fiord, on Ellesmere Island: “Everybody who shows up there has a preconceived judgmental set of adjectives,” he says. “This is just a Canadian town. They love where they live.” And although he was cut off from the social media that has made him a household name, he had time to have long conversations—and also to write songs and “to think a little differently, to ponder.” He says three of the creators he brought on board made significant career changes when they returned home: The trip had given them the chance to reflect on their lives. “They’d been so wrapped up in what they were doing, they hadn’t had the chance to actually evaluate whether that’s what they wanted.”

Michel, too, was greatly affected. “It’s in my blood now, and if you’d have told me I could have stayed in the boat for months, I would have, in a heartbeat. Peace came over me up there,” he says. When he did return to Ontario, he and woodwind player/composer Rob Carli filled out the tunes with a chamber orchestra; on February 23 to 24, Michel, Carli, and Hadfield will recreate the album at Toronto’s Harbourfront Centre. A former captain of the Khlebnikov, who’d been on the ship for 12 years, will join them to tell stories. “It’s going to be the biggest thing I’ve tried to undertake,” says Michel, “again biting off more than I can chew.”

And after? “This is the fun part now: staring at a clean slate. I don’t know where to go after this. I’ve gotta make an album at the bottom of the sea!”