Be a Rebel Rebel, with Croslite™ material: Crocs won't be the last to try to monopolize on mourning

David Bowie is dead, of cancer at 69. This seems odd and impossible and even disappointing, given how otherworldly he felt, and the weight of his passing feels heavier because he was, after all, so many different people, to so many different people: Ziggy Stardust, Aladdin Sane, the Thin White Duke. He was a weirdo, alright: Even David Cameron, the prime minister of Britain—the very definition of stuffy conservative—nodded to Bowie’s iconoclastic nature. Bowie faced the strange—and did it in a fashion style that was entirely his own, eschewing mainstream conventions of comfort and gender to do so. His life was largely an act of anti-normcore. 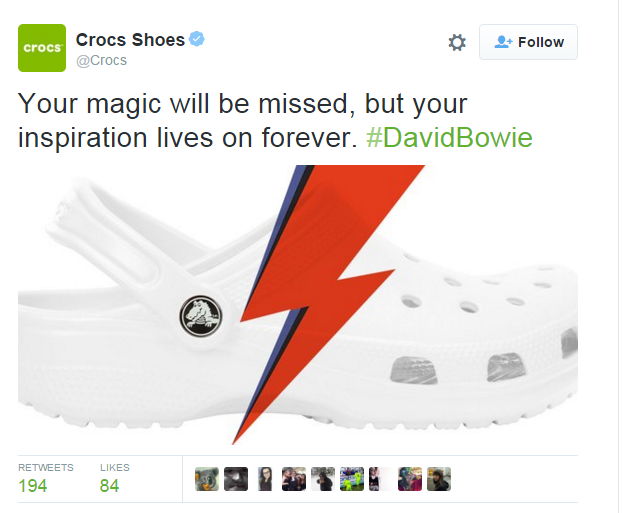 Crocs would go on to delete this tweet within half an hour, and fair enough: It’s hard to imagine a worse fit (perhaps if McDonald’s used the moment to promote its “ch-ch-ch-ch-changes” to its dollar menu). It’s not the first to fumble in the wake of a moment of mourning. For instance, in 2013, Spaghetti-Os felt it appropriate to honour the 72nd anniversary of Pearl Harbour with an image of its giant anthropomorphic noodle holding an American flag, licking its weird O-shaped mouth, presumably and inexplicably at the deaths of thousands of Americans. Crocs also won’t be the last. (In fact, Mexico’s “leading low-cost airline” Viva Aerobus used what appears to be MS Paint to graft a lightning bolt atop a pre-existing ad featuring a plane, tweeting it along with the words “Look here, I’m up in the sky.”)

Brands’ desire to join a wider social media conversation is almost always wrong-headed, but at least understandable. It’s an opportunity for a company to show they’re “with it,” to expand the identity of its brand and gain currency with new markets. So too is there the belief that even in a worst-case scenario, bad press is still press.

Of course, these brand pages aren’t people—a surprisingly easy thing to forget in Twitter, where accounts swirl around in tiny, immediately forgettable bursts, in a space that’s largely egalitarian. They’re messages carefully crafted by companies that, at their core, are trying to sell you something—either a product, or itself. And while grief is universal, it’s also intensely personal and human—and for someone like Bowie, whose legacy is deeply tied to how people found comfort in his weirdo status, that’s especially hard to square. It’s hard to imagine a pair of foam clogs listening to Bowie in the night, finding solace despite their art-school outsider status. (Actually, this tweet would be better if you imagined this.)

Bowie himself even seemed to warn against this kind of exploitation in the song “Lazarus,” from his last sonic will and testament Blackstar: “I’ve got drama, can’t be stolen/Everybody knows me now.” It’s tantalizing to try to absorb some of Bowie’s omnipresent cultural capital, but the way he eschewed convention his entire life makes efforts like this feel like an act of identity theft. Bowie even briefly worked in advertising, too—and “loathed” the experience.

Failures like these—and there will be more to come—are reminders that brands aren’t meant to be brave and bold rebels: they’re supposed to represent a promise to a consumer, so that when they have to choose a product at the store, they’ll be biased toward buying something that they know aligns with their own lives and beliefs. Good brands are supposed to stay in their lane—how terribly unlike Bowie—and while the nature of their identity can evolve, that almost always happens over time. After all, Crocs were hardly seen as space oddities before Bowie’s death, even in spite of their bulky astronaut-like appearance.

But if there’s a lesson that brands like Crocs want to take from this, it’s that there’s also value in silence. Take it from Bowie, himself, who made no music for 10 years—and lost nothing for it.