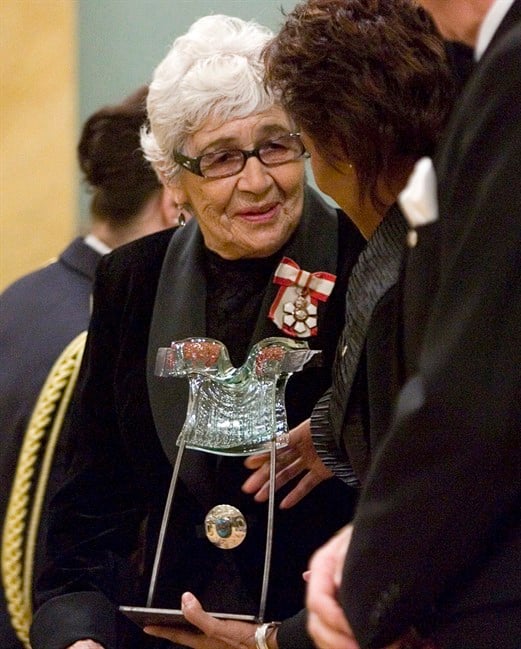 Governor General Michaelle Jean congratulates Daphne Odjig after receiving the Governor General’s award in visual and media arts at an awards ceremony in Ottawa Friday, March 23, 2007. Odjig, an elder of Canadian aboriginal artists whose work appeared in galleries around the world, has died. (Tom Hanson/CP)

KELOWNA, B.C. – An elder of Canadian Indigenous artists whose work appeared in galleries around the world has died.

Daphne Odjig was born in northern Ontario and had been living in Kelowna, B.C., where she passed away Saturday at the age of 97, her son, Stan Somerville, confirms.

Odjig, whose work blended the influences of Pablo Picasso and Vincent Van Gogh with the shapes of Ojibwa pictographs, played a prominent role in leading First Nations painters into the mainstream of Canadian art.

She and her late husband opened the first Canadian gallery dedicated to First Nations art, which became a magnet for what came to be called ”the Indian Group of Seven.”

Odjig received the Order of Canada, as well an eagle feather from the chief of the reserve on Manitoulin Island where she was born — an honour formerly given only to great hunters and warriors.

Odjig had been living in a seniors’ home for some time, friend Sheila Keighron says, but was continuing to sketch despite arthritis in her right arm.

“They were just beautiful. I think that’s what kept her going,” Keighron said of the sketches.

During the Second World War, Odjig worked in factories in Toronto where she discovered art galleries and libraries. Picasso’s cubist work was a major influence, and Picasso himself later saw her work when it was exhibited at Expo 67.

“I did a lot of pen and ink sketches, charcoal sketches of the reserves and of people at work. Then we moved to Winnipeg and that was a meeting place for artists from the East and the West. Everything sort of mushroomed,” Odjig said in an interview in 2001 at the opening of a show of her works in Toronto.

Odjig and her husband opened a gallery in Winnipeg, which became a magnet for other self-taught artists including Norval Morrisseau, Jackson Beardy, Carl Ray, Alex Janvier, Joseph Sanchez and Eddy Cobiness.

The Winnipeg Art Gallery took notice, and in 1972 gave three of the artists a groundbreaking show.

Odjig and her husband moved back to B.C. in the early 1970s, eventually moving to Penticton in the late 1990s to be closer to a hospital.

In 2007 she was the winner of the Governor General’s Award in Visual and Media Arts. She was the subject of a solo exhibition at the National Gallery of Canada in 2009.

Odjig is quoted in a book published in 2001, “Odjig: the art of Daphne Odjig, 1960-2000,” stating that if her work has helped to open doors between the Indigenous and the non-Indigenous community, then she is glad.

“I am even more deeply pleased if it has helped to encourage the young people that have followed our generation to express their pride in our heritage more openly, more joyfully than I would have ever dared to think possible,” she said.

Read more on Odjig in our Canada’s Stories project.