The Victorians suffered for their brilliant arsenic gowns and flammable crinolines. We’re not much better. 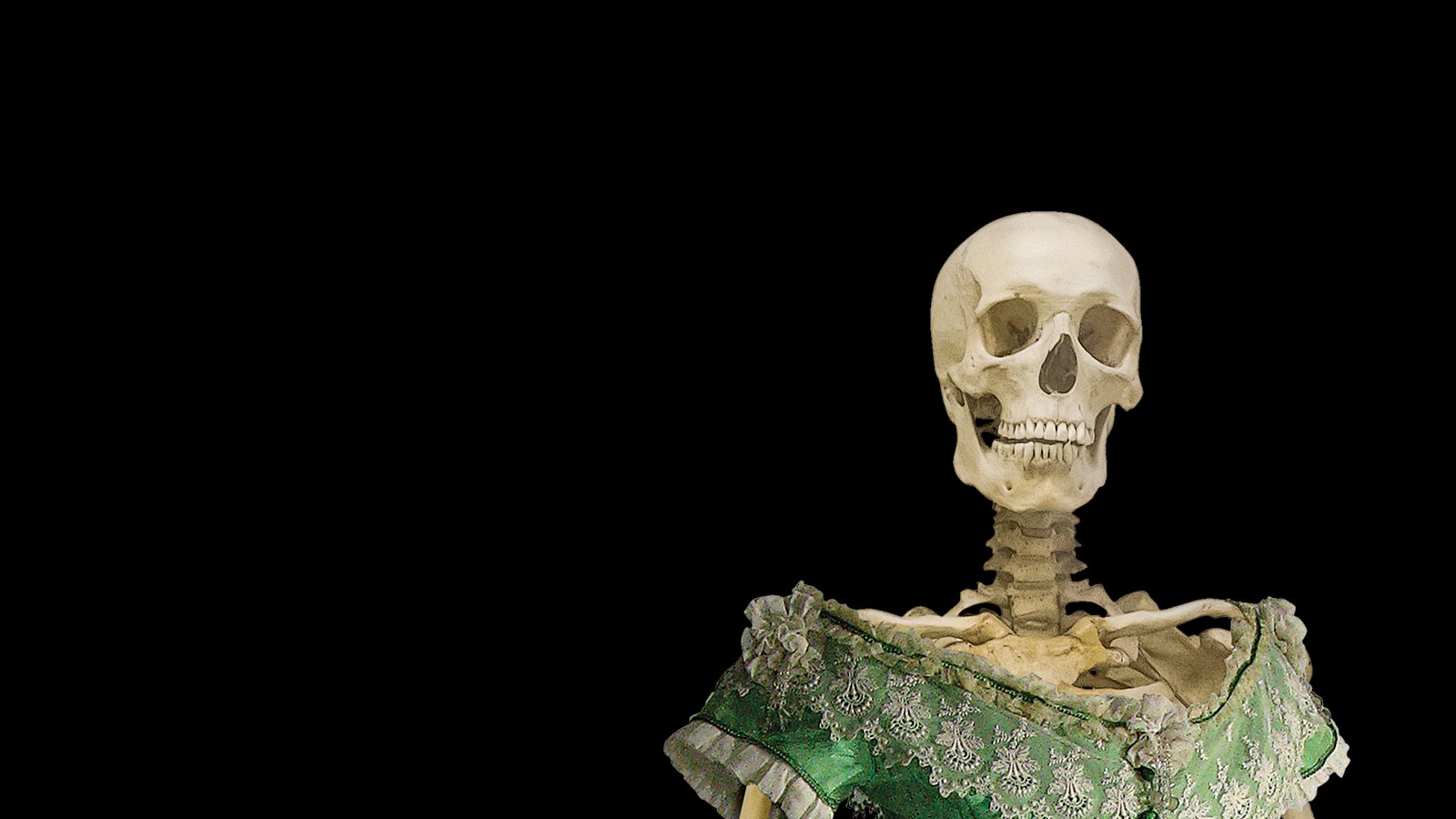 The “arsenic” ball gown sits on a headless dressmaker’s form in the basement archives of Toronto’s Bata Shoe Museum as senior curator Elizabeth Semmelhack, wearing cotton conservators’ gloves, expounds upon its vintage (late 1860s), its provenance (Australia), its exquisite construction—and, most relevantly, its ability to kill.

The green of the shimmering silk, now slightly faded, was one of the Victorian era’s most fashionable hues; people, mostly women, wore it even after it was widely known that the arsenic-based dye responsible for the colour could lead to horrible physical suffering and early death. When asked if the dress poses any danger still, Semmelhack pauses. “We’ve been counselled not to lick it,” she says, laughing.

The prime risk, Semmelhack explains, was for the wearer who would sweat and absorb it. But the dangers of the dye didn’t end there: They extended to a long chain of people, from factory workers to seamstresses to fellow ball-goers.

The once-deadly gown is one of more than 90 artifacts—clothing, shoes, hair accessories, advertisements, cartoons, staged tableaux—being readied for the museum’s upcoming exhibit, Fashion Victims: The Pleasures and Perils of Dress in the 19th Century. The show, which opens June 18 and runs through 2016, is co-curated by Semmelhack and Alison Matthew David, a professor at Ryerson University’s School of Fashion whose decade-long investigation into the relationship between clothing and health inspired it; her book on the topic will be published next year.

10 most famous pieces of footwear in the Bata Shoe Museum

“Nobody cares about what handbag you’re wearing.” Why shoes are the new fashion signifier

What does that $14 t-shirt really cost?

The exhibit’s title was carefully chosen, says Semmelhack: “There’s almost a Victorian excess of pleasures and perils to be explored.” Among the pleasures is how industrialization and the creation of department stores lead to a democratization of fashion, allowing more people to participate in the acquisition of luxury and exclusivity, if only peripherally: “Today, you may be able to afford Prada perfume but not a Prada ensemble,” says Semmelhack. “Then, you could buy your shoelaces at [Paris department store] Le Bon Marché.”

In the museum’s shoe archive, a footwear candy store, Semmelhack shows a pair of extravagantly hand-embroidered Jean-Louis François Pinet women’s boots next to a far more modestly embellished pair—akin to a pair of Roger Viviers next to Steve Maddens. “It’s an attempt at ornamentation but not as glorious,” she says. Economics mattered, with the introduction of cheaper materials often coming at a high cost, seen when celluloid hair combs replaced tortoise shell, Semmelhack says: “They were so explosive when exposed to fire that houses burned.”

Stick family feud: What the backlash against those cartoon decals says about our times

Victorian women also routinely burned, a fact showcased by a dressmaker’s form displaying a boned corset cinching a tiny waist above a metal hoop crinoline form. “Crinoline fires” killed 3,000 women between the late 1850s and late 1860s in England. Women would lose sense of their circumference, step too close to a fire grate, then flames would be fanned by oxygen circulating under their skirts. Until electricity, ballerinas also routinely perished when the muslin of their tutus met gas lamps; the deaths were referred to at the time as the “holocaust of ballet girls.” (The remedy, flame-retardant fabrics, was seen by many as too ugly to wear.)

In her office, Semmelhack runs through the exhibit’s floor plan, modelled after Paris’s famed shopping arcades. “My hope is visitors will be seduced by this beautiful space and beautiful colours and beautiful things; it’s only if you pause and read the text that what is embedded in the objects themselves becomes revealed.” At the outset of the four-year planning process, Semmelhack and Matthew David focused on obvious perils: constriction, sock poisonings, fire. They then observed the extent to which 19th-century dress was about gloss: “Women’s silk and satin dresses just glowed, as did men’s shiny top hats and shiny boots,” she says. “Then you’d think: How does a man navigate an urban 19th-century landscape and stay shiny? In part it’s through the little boys littering the landscape who shine shoes for a pittance.” They became intrigued with the invisible “fashion victims” who supported the fashionable image: the factory workers who grew in numbers (and the artisans whose ranks declined), child labourers, “mad hatters” exposed to mercury poisoning, slaves picking cotton, even silkworms sacrificed harvesting silk threads. This raises “modern age” questions, Semmelhack says: “Is the march of progress to the benefit of mankind? Is it to the benefit of the few? And how do the masses fit into this?”

The resulting show is layered with meaning as it explores the ways in which what we wear is driven by economic, political and social forces, not personal taste as we like to believe. Mania for arsenic green (also used in artificial flowers, wallpaper, paint, even medicine for morning sickness) offers the perfect example. Its popularity was abetted by ready supply as a mining by-product (William Morris’s family owned the biggest arsenic mine in England), as well as by the arrival of the electric light bulb, which shifted colour preferences. “It retained a luminous quality in daylight or evening,” says Semmelhack, who notes that it wasn’t until the light bulb that diamonds became important in fashion “because they really sparkled.”

Similarly, the fashionability of extremely narrow women’s shoes derived in part from industrial edict, Semmelhack says: “If shoemakers could make straights—no left or right foot—they only needed one last per size.” The return of women’s high heels in the late 1850s and early ’60s served a different social purpose: a form of censure for women at a time the sex was becoming outspoken in the abolitionist movement. The heel had been banned for most of the century due to its association with debauched French aristocracy. Its revival was intended to summon similar negative associations, says Semmelhack: “It was called the ‘Louis heel’ to make sure everyone knew it was a reclamation of the 18th century. It was intended to be highly destabilizing.”

Also telling is the gender divide in the way rich and poor dressed. In the shoe archive, Semmelhack compares a pair of high, narrow-toed, shiny men’s boots to rough-hewn round-toe men’s leather work boots. Variation in women’s footwear, on the other hand, is observable only in the quality of fabrication and construction. Thus, to the untrained eye, there is less distinction between the worth of a rich woman and that of a middle-class one.

The arrival of vivid, even garish, colours created by aniline dyes in the 1850s furthered the gender divide, Semmelhack notes: “Women and children were wearing these new colours created by industrialization, but upper-class men almost rigidly wore the colours of the factories that made them so wealthy.” A particularly tragic irony is seen in the popularity of bright red, associated with vigour, for children’s clothing: The dye used to create it caused rashes and ill health.

Semmelhack refuses to see fashion extremes and the risks people took to remain in vogue as ridiculous. Not following fashion was equally perilous, she says: “If idealized femininity is about women’s participation in fashion, and if femininity or beauty is the major thing you are judged and valued by, then, if you reject it, trust me, all hell breaks loose.”

It’s impossible to look at the exhibit and not draw contemporary analogies—narrow footwear replaced by vertiginous heels, corsets by sausage-casing Spanx, Dickensian factories by offshore sweatshops. Our forebears were willing to burn for fashion. We’re too evolved for that: We let others burn for us.

The social and health costs of fashion is a growing field of curatorial interest, also evident in the 2009 exhibit Eco Fashion: Going Green, at New York’s Fashion Institute of Technology, examining “fast fashion.” It revealed the United States consumes some 84 lb. of textiles per person per year, that the average garment purchased in the U.S. is worn only six times before being discarded, and that textile making uses more than 8,000 chemicals, many of them irreversibly damaging to people and the planet. We may look askance at British parliament ignoring demands to outlaw manufacture of arsenical products until the end of the 19th century, despite known toxicity, but we’re not that further advanced.

A more comic reminder of this was seen this year at Cannes, where director Atom Egoyan told the story of the actress Blake Lively not being able to fit in the car going to his film’s premiere because the skirt of her ball gown was too voluminous. We may think the narrative of fashion’s perils is historical, but as this provocative, important exhibit reminds us, it’s still being written.

Update December 2017: Fashion Victims: The Pleasures and Perils of Dress in the 19th Century is on view until April 2018 at the Bata Shoe Museum.