Don't like classical music crowds? This one will grow on you.

Image of the Week: A concert staged exclusively for house plants restores Barcelona's reputation as the capital of out-there art 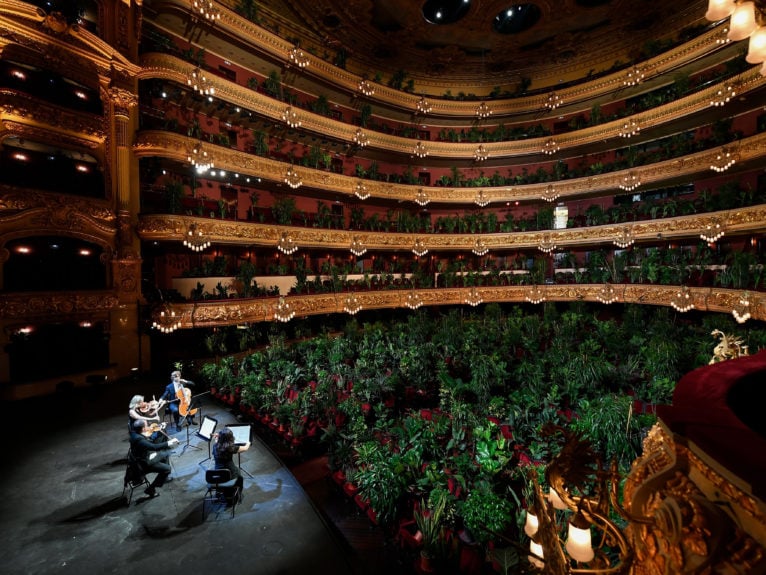 The Uceli Quartet performs for an audience made of plants to mark the reopening of the Liceu opera house in Barcelona. (LLuis Gene/AFP/Getty Images)

When Italian opera legend Giacomo Puccini wrote a sombre tune for a string quartet in the early weeks of 1890, and called it “Chrysanthemums”, he did so in the memory of a deceased Spanish king—not because the composer really loved plants. And yet here we are, 130 years later, slowly emerging from our pandemic bunkers, watching Puccini’s piece performed in front of 2,292 actual house plants. On June 22, the quirky concert was held in Barcelona’s venerated Liceau opera house, where organizers with an artistic flair wanted to simultaneously mark the absurdity of the modern age while reopening the venue’s doors after three months of lockdown. Spain, like many Canadian provinces and nations worldwide, is now beginning its gradual economic reopening, testing the waters with restaurant patios and enforced social distancing in an effort to save the summer and make people’s lives a little less miserable. In Canada, that means sending kids in Quebec back to school and reopening Toronto’s economy mere days after the rest of Ontario; in Catalonia, it means weird art shows, after which all the plants will be donated to health-care workers.

You can watch the Spanish performance here. Be sure to stay tuned until the end to catch the leafy applause.

FILED UNDER: barcelona Image of the week Liceau opera house