On tour with the National Arts Centre Orchestra, a master steps into the light 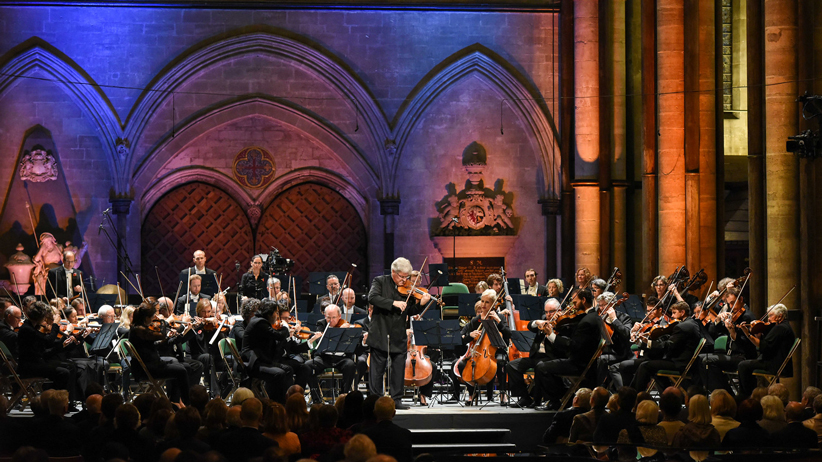 An orchestra on tour faces challenges any music ensemble would face on the road. Night after night, both audiences and venues are unfamiliar. The novelty pushes a band out of its comfort zone, where great things can happen. Or the other kind of things.

The National Arts Centre Orchestra (NACO) had a good run during its late-October tour of the United Kingdom. To help fulﬁl its national mandate, the Ottawa-based orchestra tours every two years within Canada, but its international touring had been sporadic for a while, budgets and logistical challenges being what they are. That’s picked up lately, because the National Arts Centre (NAC) has gotten better at private fundraising to supplement its generous parliamentary budget allocation, and because the mood lately tends toward the valedictory: Pinchas Zukerman, the orchestra’s mercurial music director, will end his 16-year tenure at the podium in the spring.

So the NACO toured China last year. Now it was spending 10 days in Edinburgh, London and points west. The occasion was the 100th anniversary of Canadian troops’ arrival on British soil at the beginning of the First World War. The mood was sombre. More so, because Cpl. Nathan Cirillo and Warrant Officer Patrice Vincent were murdered in the same week the tour began. Prince Charles was in the audience for the orchestra’s London concert at the Royal Festival Hall.

That concert was a mess at times, forgivably so. London’s Royal Philharmonic Orchestra shared the stage with the NACO. Zukerman is the London orchestra’s principal guest conductor. They’re very different ensembles. Together, with a 100-voice choir behind them and four British vocal soloists in front, the two orchestras played Beethoven’s Ninth Symphony. It wasn’t tight. It sprawled, as two interpretive styles duelled under one baton. But an audience that owed the Ottawa visitors nothing gave the commotion a hearty standing ovation. The Prince was on his feet, too.

Now, I wasn’t on assignment covering this tour; I was on vacation. My relationship with the orchestra is complex—my spouse and I are donors, and I frequently give pre-concert chats and sometimes play onstage master of ceremonies at the orchestra’s concerts—so I don’t normally write about anything they do. But, two nights after London, the NACO played, all by itself, at Salisbury Cathedral, and what happened there was one of the finest music performances I’ve heard.

The cathedral is vast, a city block long, 750 years old. Down the hall from the nave is one of four surviving original copies of the Magna Carta. The immense hall was drafty. The sound echoed. The orchestra was wary and attentive. Zukerman led them with care through Vaughan Williams’s Fantasia on a Theme by Thomas Tallis, a lyrical showcase for strings at three scales: a full orchestra, a nine-piece ensemble offering echo and commentary from behind, and a quartet of string soloists at the front. It was exquisitely balanced.

Zukerman knows strings. He hired Jethro Marks, the orchestra’s principal violist, and Yõsuke Kawasaki, its extraordinary concertmaster. At 66, he has been one of the world’s finest violinists for decades. His relationship with his orchestra has sometimes been tense, but they’re still in awe of his playing.

Rightly so. After the Vaughan Williams, he conducted with gestures and body language while playing Max Bruch’s Violin Concerto No. 1. It’s off-the-rack mid-19th century romanticism, but, with his features fixed in a scowl, playing as if he had something to prove, Zukerman carved it from the air as if from oak. His phrasing was so broad and idiosyncratic, it’s a wonder Kawasaki found a beat in there for the rest of the orchestra to follow. The performance had the depth of expression that comes only from a master.

When the Zukerman years in Ottawa end, he’ll leave behind an orchestra he’s shaped profoundly and not always delicately. A large number of students he inspired will work their way through the orchestra. And he’ll leave behind the echo of some notes he played on violin. They’ll still be talking about him in 30 years.