God is real! And He’s hilarious on Broadway.

A tweeting God makes his stage debut, played by who else but Jim Parsons? 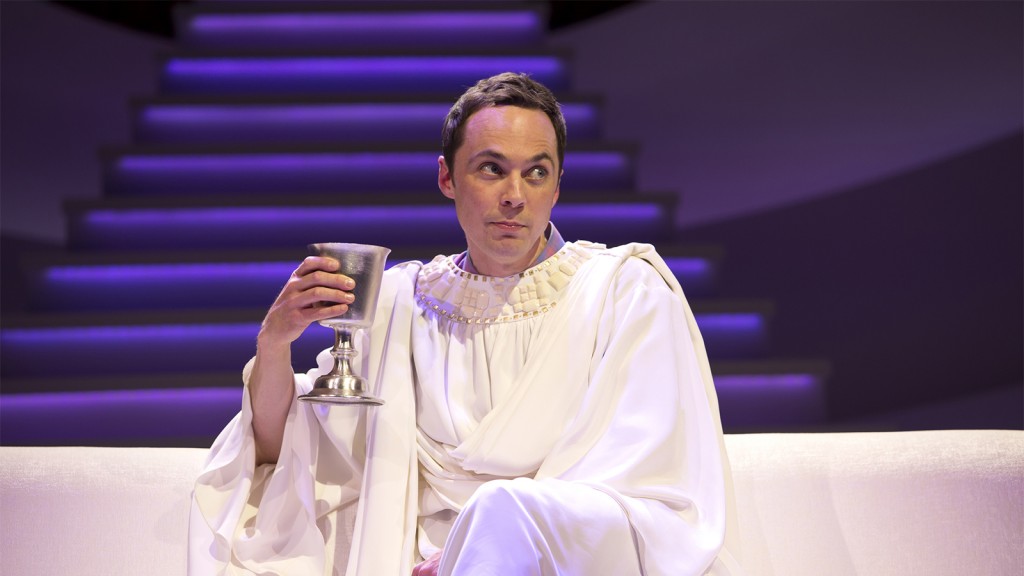 Jim Parsons in “An Act of God” (Jeremy Daniel)

It was just the third preview performance of An Act of God on Broadway, and already God was late for His own show, by seven minutes. Given the deity is a self-declared “jealous, petty, mass-murdering narcissist,” it’s a good thing no one in the audience of 1,004 criticized His manners. When He did appear on stage—inhabiting the body of The Big Bang Theory’s Jim Parsons­—to start the show, which officially premieres on May 28 for a 13-week run, it was to unveil a new Ten Commandments (No. 4: Thou shall separate me and state).

The show is a hilarious riff on the Old and New Testaments that focuses on the Bible’s biggest A-listers: Adam and Eve, Noah, Abraham, Jesus. Along the way He spilled more than a few secrets of the God business, admitting that Amen is His favourite word, since it ends stupid prayers. Then there was the revelation that He faked all the scientific evidence of evolution—dinosaurs, fossils, even booking Darwin’s cruise—so that when a scientist dies and ascends to heaven, God can bellow, “So long, sucker!” as the trapdoor to hell opens.

That the world can laugh at, and with, a patronizing, self-centred deity who is both omnipotent and incompetent is thanks to comedy writer David Javerbaum. The 13-time Emmy-winning former head writer of The Daily Show With Jon Stewart has been God’s secretary and press agent since 2010, when he started The Tweet of God as a way to promote an upcoming book, The Last Testament: A Memoir by God. Those twin sources—which are officially “written” by God—are the basis for the play, for which He gets a “creator” billing. It’s also making history as the first Broadway show created from a Twitter account. By blending everything from sex and death to sports into tweets with a religious edge, Javerbaum gets to point out the absurdities in faith and modern life. He has offended many, to be sure—Wal-Mart refused to stock his book—but with tweets like, “Prayer is founded on the fundamental misconception that I take requests” and “Don’t take this the wrong way, but I regret you as a species,” retweeted 6,600 times, his account has two million followers, including a significant number of pastors and self-described agnostics alike.

Javerbaum, who isn’t religious himself, doesn’t consider An Act of God an atheist play: “It’s for those who always wanted to know why God acted a certain way, and what God feels about celebrities, America or gun control.” Neither is it for obscure Biblical scholars. The show is very much God 101, with the audience providing a laugh track.

With no intermission to break up what is essentially a 90-minute monologue, audiences are encouraged to imbibe at their seats—an $18 “omnipotent blend of bourbon, rhubarb liqueur, sweet tea, basil, lemon and ginger helps Him recharge while kicking back on the seventh day.” They do so in the old home to Studio 54, a nightclub once known as a modern Sodom and Gomorrah (perhaps not the best analogy, since, as Javerbaum explains, the originals weren’t destroyed because they were dens of depravity, but because they were the hubs of a vast shekel-laundering operation). The theatre’s interior, festooned with gilt decorations of naked women and cherubs, contrasts with the minimalist set featuring a white couch, and a stairway to heaven.

Though God is assisted by the archangels Michael and Gabriel, whose wings are complemented by natty white suits, it’s very much a one-deity show. Jim Parsons was always one of Javerbaum’s top choices for the role. “He is really incredible, in his comic chops, in the way he tells the story,” says the playwright. The four-time Emmy-winning actor’s impishly affable persona and soft Texas drawl are the perfect contrasts for a deity whose most famous depiction is as an austere old man on the Sistine Chapel. “No one else could play God,” said an audience member, after the show ended with a thunderous ovation.

As for those concerned that God may punish audiences delighting in Javerbaum’s rather Puritan-light version of His story, the comedy writer is non-committal: “I don’t feel I’m making it more or less likely. I think he’s going to do it anyway.”