In conversation with Beth Ditto: 'I just don’t care about standards'

The former frontwoman of the band Gossip discusses the body-positive community, the failures of some kinds of feminism, and pop as punk 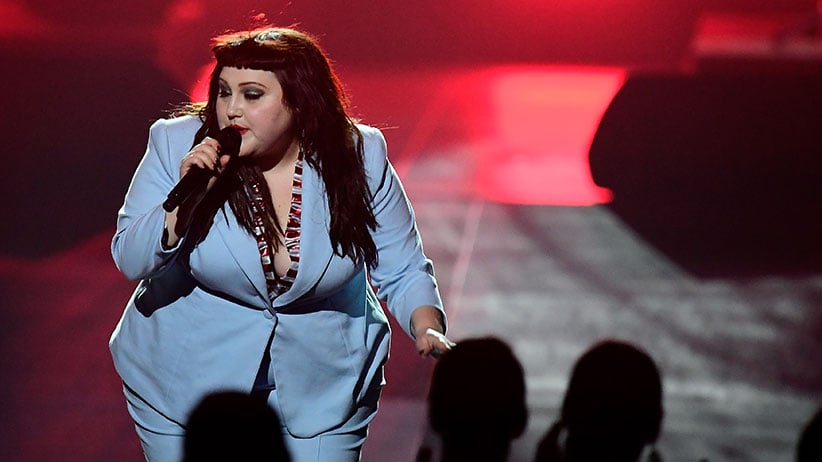 Beth Ditto does not need autotune to kick her notes into high gear—or any prompting, really, to speak her mind. The Arkansas-born singer-songwriter’s multi-octave voice and thunderous delivery is reliably resilient; she’s been bringing an operatic sensibility to pop music for nearly two decades. Ditto’s arrival on the music scene in 2001 as the frontwoman for Gossip, her former punk rock band, was just as powerful as the group’s politically charged choruses. A proud feminist and a staunch LGBTQ rights advocate—she legally married her partner Kristin Ogata in 2015—Ditto has spent years speaking out against issues such as body shaming (she has her own plus-size clothing line), as well as anti-gay and anti-choice legislation. Her first full-length solo disc, Fake Sugar—produced mainly by R&B producer Jennifer Decilveo (Boyz II Men, Andra Day and Rebecca Ferguson)—will be released on June 16. The project, as well as Ditto’s politics, are thoroughly informed by her past experience recording songs with prized electronic, dance and new-wave acts like Blondie, Simian Mobile Disco and Marc Almond.

In an interview with Maclean’s, Ditto opens up on becoming an unorthodox style icon, sexism in pop music and living in a backlash-laden country.

Q: Fake Sugar is an evolution of the sound you created in your solo EP, some of which is straight-up house music. Do you think dance and pop music is as radical as punk?

A: Of course! I feel dance and pop music genres are extremely female and extremely gay. When it comes to art and pop culture, queers are f–king weirdos. We don’t have gender rules that tell us what we can and can’t be. We just make it up as we go along. We have full creative license to be whatever we want to be. Pop music wouldn’t be around without punk music. It wouldn’t be around without disco. Disco and house music is the gay punk rock. They have affected everything powerful on the charts. Listen to Madonna’s “Like a Prayer.” Listen to Boy George and watch the Michael Jackson [“Black or White”] video. Whose life wasn’t changed by Ziggy Stardust?

Q: New songs such as “Oo La La” and “Savoire Faire” stray from rockier tracks you’ve done with Gossip. These new songs sound like the kind of music a designer would play on the runway—which makes sense since you had a big break walking on Jean Paul Gaultier’s Spring 2011 runway show. Soon after you did that, plus-size models such as Ashley Graham started getting booked, the Dove campaign happened, and key tastemakers in fashion started to think in more inclusive terms. Did you see the domino effect of your visibility?

A: It doesn’t feel so lonely now. Today, there’s the body-positive community that’s based in the real world and there are still the ones that live in this privileged lifestyle. It’s a lucky, lush lifestyle. People like Ashley Graham, [actress] Gabourey Sidibe or [actress] Chrissy Metz and myself get to be in public and have our voices heard. We are in your face, but the truth is that more people know people who look like us than they do a Kendall Jenner or a Kim Kardashian. I can’t tell you how many times I’ve had people be like, “You look so much like my friend so-and-so.” I love that—because we’re the norm. We’re the majority. Life is not about creating an unreal existence. People should be challenged to find something cool about the mundane.

Q: The lyrics off one of your new songs, “We Could Run,” touch on reality TV, specifically in the line “king and queens live the lives of people’s dreams”. So many are influenced by the Jenners, including Caitlyn, who has shaped the way so many people look at the transgender community. Can she be considered progressive?

A: No. I think Caitlyn Jenner is deep within all her struggles, and I don’t think it’s easy for her at all. Yet she lived most of her life in a white male body and experienced white male privilege for most of her life. All her friends—for the most part—were Republicans who lived and acted just like her before she transitioned. That is her community. It’s really hard for me to swallow. I commend her for all the things she’s done. I can respect and appreciate and support her in those ways but I would never be her friend. I wouldn’t be able to be.

Q: “Standing in the Way of Control” was written ten years ago as a protest song inspired by the Bush administration’s stance on same-sex marriage. You said once, “We’re got too comfortable. I’m glad everyone’s awake now.” Are they?

A: We had so many milestones in America. We were on our way to universal healthcare. We had gay marriage. We were talking about gender fluidity and trans issues openly and discussing them with respect. It was almost to the point where educating people about transgender rights wasn’t an issue. We were including trans people as a normal part of our conversations instead of seeing their [presence] as this shocking thing to the system. We forgot that those things can be taken away from you because there are people in the world that, for whatever f–king reason, can’t live and let live. They can’t understand that their hatred comes out of fear and hate and greed. I feel like I forgot that!

A: Yes, and to not get too comfortable. Obama was amazing, but he wasn’t perfect. We all know that. He was the closest thing to perfect this country’s ever had. We were basking in the glow. We forgot that there’s always going to be a backlash within a movement every time. When I think about race, there were a lot of pockets of people that were still living in fear under the Obama administration. People of colour, immigrants…so many millions of people were deported under the Obama administration. Those things happened but we were in this blissful celebration mode. Now we are constantly reminded that, although there are lots of good people in the world, there are just as many horrible people. 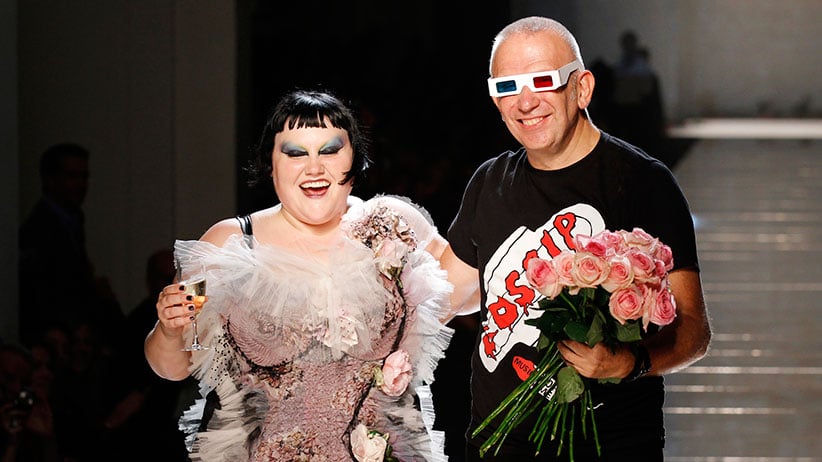 A: Capitalist feminism. Anti-sex worker feminism. The second wave of feminism wasn’t necessarily open to gay people. Not that it was closed down, but it had its eye on one specific goal so there was no room for gays. We’re still coming out of it. I never went to college and I was raised in Arkansas so there wasn’t a lot of academic language being thrown around my house. We weren’t idiots, but I didn’t have that access to academic feminism. I had to realize, on my own, that feminism is not just about how far ahead you can get in a job and it isn’t about not wearing makeup. It isn’t about not watching your waistline. I had to recreate the world entirely.

Q: How do you think the notion of feminism is changing from generation to generation?

A: I’m 36 and when I meet 16-year-olds, their relationship to feminism is so far advanced from mine. Gender, sexuality is so much more fluid than it ever was and many younger people are proud of ducking the labels.

Q: Debbie Harry once told me she often felt trapped by her image during Blondie’s rise to fame. Lady Gaga, on the other hand, said she would feel liberated by her costumes because she used spectacle as armour. Do they represent an evolution of sorts?

A: I think those experiences are one and the same to me. I feel for Debbie Harry especially because she was in such a raw moment. She was surrounded by very male hetero punk rock people. She was a very oversexualized icon. She had this beautiful voice and was such a great songwriter and had incredible style but she was so objectified. It was blatant.

Q: For someone so punk, you’ve had such an influence over the mainstream. For example, I remember Shania Twain saying she wished she could have half the confidence you did. Are you as confident as Shania thinks you are?

A: I am. With my body, especially. I just don’t care about standards. It’s not even confidence for me. It’s the opposite. I’m surprised Shania even knew who I was at all. That’s hilarious. That makes me laugh. I have to tell my mom that.

Q: On set for a photo shoot for the cover art to [Shania Twain’s] album, The Woman in Me, she was ridiculed by photographer John Derek for being overweight—she was only 115 pounds.

A: Shania Twain’s a powerful person. She’s a multimillion selling artist. She’s an international pop star. She can say no. I grew up with the motto of “they can’t kill you and eat you,” and I still think that’s right. You sure as hell can’t! When it comes to speaking about my body makes other people uncomfortable but it doesn’t make me uncomfortable. It usually makes them think more about themselves than it makes them judge me. I’ve always had this body and I’ve always had to live with it. I’ve also never been a little thing. I’ve been smaller but I’ve never been small. Even as a baby I wasn’t small. I’ve never had that window into that kind of world where people only talk to you because you’re conventionally sexy. It’s the opposite experience.

Q: Did you feel clothes and aesthetics have helped protect or harm you or your career in any way?

A: No. I have a very good relationship with myself. My favourite quote is, “What you think about me is none of my business.” Just yesterday someone attacked me on Instagram and wrote, “You’re pure garbage.” I thought, “Well, it’s all relative.” Sure! That’s his opinion. Instagram is a Roman arena of insults. Everyone is a lion, but it is fun.

Q: Last time you toured Canada, you made headlines for singing “I Will Always Love You” during a concert in Toronto. It was at a time when Whitney Houston’s clothes were being auctioned off, tabloids were running inaccurate stories about her death and unapproved songs were being leaked online. Recently a controversial documentary about Houston’s life has been doing the film festival circuit. As a staunch Whitney fan, does it distress you to know people are trying to taint her legacy?

A: This is how I feel about everything that’s out of your control: once you make a record, it’s not yours anymore. There’s nothing you can do. It’s the way I feel about political movements—both of those things grow on their own. The documentaries and unofficial releases…that’s not Whitney. Those things aren’t her. Those aren’t her sounds or records. She would feel that way too. You’re not seeing her being diluted or exploited. You’re seeing someone else being desperate to hold on to what they had when she was alive. Don’t associate what happens after Whitney’s death with Whitney unless it comes from her voice.

Q: All the songs on Fake Sugar are surprisingly upbeat, keyed-up and high energy. Were they informed by America’s presidential election?

A: They were all created pre-election! It was a blessing in disguise that happened. Can you imagine how this record would have sounded post-election? Don’t even get me started.