In defence of Nickelback

Nickelback is seen by many as a punchline. So why are they so popular? The answer is in Canada's cultural context—and the music itself 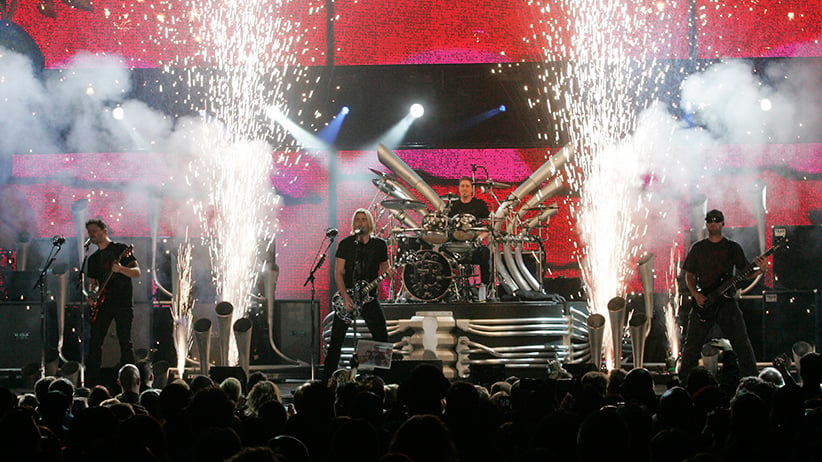 Andy Warhol: I think everybody should like everybody.
Gene Swenson: Is that what Pop Art is all about?
Andy Warhol: Yes, it’s liking things.
— “What is Pop Art? Answers from 8 Painters”, Art News 62, November 1963

Liking things has long been a complicated act for critics, who are obliged to cast a thoughtful (and occasionally cynical) eye on the surrounding culture. But these days, perhaps more than ever, critics—and especially music critics—write about liking things, and liking popular things too. This partly stems from the personal taste of individual critics, but also from an almost moral obligation to carefully examine work a general audience adores. That’s the definition of pop music, after all, and paying close attention to things that millions of people love is the new normal.

Still, there remain bands that go unexamined—blind spots that critics have missed, those dark spaces of music still too shadowy and stigmatized to be taken seriously.

And one of those bands, without question, is Nickelback.

They’re one of the millennium’s few diamond-selling artists. They’ve won two American Music Awards, six Billboard Music Awards and a dozen Junos; they’ve been nominated for multiple Grammys. They are the eleventh best-selling band of all time, with a pile of gold and platinum albums to their name, and they’ve become one of the few Canadian bands to have truly broken through to an international audience; they’re the second best-selling “foreign” group in the U.S., behind only the Beatles. And according to Maclean’s Canada Project survey, in partnership with Abacus Data, if given a choice between calling Nickelback a “Canadian treasure” or a “national embarrassment,” 69 per cent chose the adulation. Despite all of this, they’re misfits, still ignored by critics—often based out of Canada’s city centres in the east—and they’re the popular butt of derisive jokes.

COUNTERPOINT: Nickelback is a national treasure, says Canada. Wait, what?

They’re not pop enough to be considered by the pop kids. They play the wrong kind of rock for the rock critics, since they express the suburbs’ joy rather than their ennui, an act that earned Arcade Fire plaudits. They are ill-placed geographically; Prairie musicians that east-coast critics extol tend to eschew the glee that Nickelback embraces, like recent darling Colter Walls and his faux Texas drag, or Ryan Boldt singing about murder and misery, neither of whom discuss the possible pleasures of small-town life in Western Canada. And many critics tend to look more kindly on pop music that doesn’t sell enough records to actually be popular—see, for instance, Carly Rae Jepsen.

The key, as ever, is context. And for Nickelback, part of that reconsideration has to emerge from the place they came from. The ongoing problem of geography, after all, continues to mark a geographical split in their Canadian critical reception—one that Chad Kroeger and his bandmates fall on the wrong side of.

Nickelback—formed in 1995 in Hanna, Alta.—come from the Prairies, and they’re steeped in prairie populism, something that’s rarely understood and is often held in contempt by critics from the east. The West has a long history of organizing as a collective whole against people they imagine as snobbish, or who they see as unable or unwilling to consider their interests. The massive success of Nickelback can be seen as another example of prairie systems working at oblique angles to mainstream eastern politics, like the formation of the United Farmers of Alberta in the face of Ottawa’s control over its resources, or a riff on Preston Manning’s Reform slogan from the 1990s: “the West wants in.” The isolation that Alberta feels from Ontario politically is similar to the isolation that they feel culturally, and the pushback is an intersection of political and cultural meaning.

Music critics also often hold an ambivalent view towards rock-and-roll in general. Meat-and-potatoes, working-class rock music has never quite broken through for the poptimist guardians, who are eager—and fairly so—to critique the misogyny, racism and homophobia of traditional rock, but leave working-class bands caught in the middle, a class intersectionality ignored that deepens the isolation already felt.

The academic and musician Steven Waksman, who plays guitar rock and writes adroitly about popular music, discusses this problem by comparing Nickelback to Grand Funk Railroad, arena-rock legends beloved by the working classes in America’s so-called “flyover states,” who never quite got the critical bones they deserved. They hailed from the beleaguered industrial city of Flint, Mi.—not quite the small town of Hanna, whose industry rests on agriculture, and resource extraction, but still a place that keenly felt the idea of being left behind. “Prairies, rural, it’s even more removed from sites of ‘good taste’ than suburbia,” says Waksman, adding that this removal from good taste—or even interesting vulgarity—is something that haunts Nickelback. It’s just that kind of lack of respect, though, that’s symbolic of the lack of consideration both Albertan and working-class audiences feel they receive.

This has been happening since Confederation: John A. MacDonald’s railroad made wheat easier to ship to international markets, ignoring the regions where it was grown. The same thing happened for coal in Alberta’s southeastern foothills, and when oil was discovered in Turner Valley in 1936, or in Leduc in 1947. It fuelled the anger about Pierre Elliot Trudeau’s National Energy Policy, and it fuels the anger around Rachel Notley’s carbon tax. And if we have decided in this post-Napster era that tech or culture are kinds of resources, then how execs in Toronto have turned these small-town boys into commercial Goliaths fit very much into that tradition. Nickelback, then, becomes a kind of western revenge export, born and processed there, distributed prolifically, and becoming a global brand of both Albertan and Canadian identity. Nickelback’s refusal of good taste becomes a rejection of eastern breeding, and a reinforcing of their geographic and economic roots within the broader national picture.

And the fact that Nickelback dismisses the insults only fuels the idea that they can be subversive proxy heroes for some alienated Westerners. “I don’t think that all the haters and the critics know how many favours that they’ve done for us. Because otherwise we would just be this just whatever band. And now we’re this controversial band. Everyone’s like ‘I hate them’ or ‘I love them’—whatever it is, people are talking about us,” Kroeger said in a 2014 interview in the National Post. “Everybody knows that if you make a video and you put the word ‘Nickelback’ in it it’s going to get a minimum of a million views. Every single time.”

All of this conversation matters, but the unanswered question remains: is Nickelback any good? By my accounting, yes: They are always interesting, and often very good.

Sometimes, the critics even agree with me—”How You Remind Me,” arguably their biggest hit, did place 40th on 2001’s gold standard of critical pop acclaim, the so-called “Pazz and Jop” list. That song has a perfect chorus, a crunchy hook, and a populist remake of grunge’s well-hidden pop instincts. It takes the infamous Pixies formula of loud-soft-loud and grafts it onto light metal, and moves that crossbreeding in a way that not only seems natural, but inevitable. The formula—blended with Nickelback’s ambivalence toward knowing how ironic the pleasures are—has continued to be a central theme for the band.

It reaches its apotheosis with “Rockstar,” an underrated masterpiece. Nominally, it’s a track that lists off the false promises of being a rock star, but it makes the cliches of decadence and ambition sound downright fun. After Kurt Cobain, it appears to have become a taboo to mention how desirable sex, money, drugs and material excess are. While the song isn’t fond of women, and it is surely silly, the desire to be a rockstar, to be beloved, sublimates any moral irony into a spirit of excess, one that our rock stars—and our fellow Canadians—would otherwise be embarrassed to admit. The song’s music video even shows how much Nickelback is a band of the people with a universal-feeling message, showing people from around the world and all walks of life lip-syncing to the tune.

This lack of embarrassment is key to Nickelback’s formula. Much like the glam rock of the 1980s, where technical skill merged with a commitment to a life of dumb pleasure, Nickelback’s music may not be smart, but it’s a hell of a lot of fun. Listen to the drinking anthem “Bottoms Up,” and try not to sing along to the chorus. Sometimes these pleasures are so simple that they are difficult to critically engage with—see the loutish “Something In Your Mouth”. But when Canadian depictions of sex are often abject (David Cronenberg), lonely (Drake) or weird (Marian Engel), Nickelback’s depictions of sex are glammed out, loud and performative. This was a band who wrote a song called “S.E.X.” about late-night parking-lot threesomes—with Kroeger’s growl of “yes” purring over the old-school grind of guitar solos. They refuse any modesty—and they’re all the better for it.

Maybe they’re not the smartest songs. But they are great rock songs, marked by a refusal to complicate desire, either musically or lyrically. Perhaps this is one of the gifts of Nickelback that we don’t think to admit, like Warhol’s preference for things that rest closer to bodily pleasures than cerebral ones.

It’s not smart. It’s not sophisticated. But it is fun as hell—and sometimes, when you hear them after the rodeo in Cook County in Edmonton, or the Ranchman in Calgary, or the Blue Yak bar in Olds, populist bodily pleasure is all we need. Context be damned.

Anthony Easton is a writer and artist who grew up in Alberta and now lives in Hamilton.