In the Canadian wilderness, the ultimate battle of the string quartets

Paul Wells: Every three years at the Banff Centre for Arts and Creativity, young musicians battle to be named the top string quartet—and maybe win a career on a platter 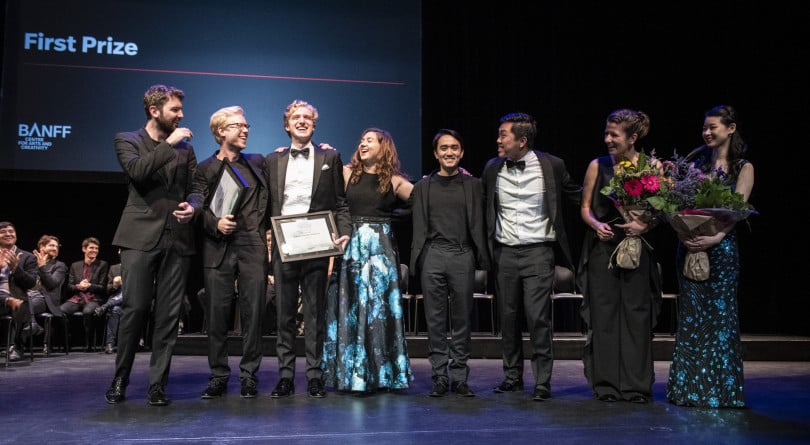 How do you judge a music competition? It’s apples and oranges, strawberries and steak. By the Sunday of Labour-Day weekend, 10 young string quartets from “around the world” — read mostly Western Europe and the Western bits of Canada and the U.S. — had been taking turns for a week on a stage at the Banff Centre for Arts and Creativity. All were good. Several were fine indeed. At last the jury had to pick a winner between two brilliant quartets that could hardly be less alike.

There’s no slow winnowing at the Banff International String Quartet Competition (BISQC), which has been taking place every three years since 1983. There are 10 quartets on the first day, all musicians under 35, most in their early 20s. They play round after round for a distinguished jury of chamber-music veterans. Haydn and 20th-century music in the first round. Then the 18th-century Romantics. Then a newly-commissioned piece played 10 times in a row, in a single concert, and let me just say you haven’t lived until you’ve heard the same piece of abstract music played 10 times in two hours. Then Schubert and whatever else each group feels like playing to fill out a 40-minute program.

Only then, at the end of the sixth day, does the jury cut the field to three finalists. A bit brutal. But part of the charm of the thing for the quartets that don’t make the cut is that there’s only one cull, it comes late, and in the meantime you can’t say you didn’t get a chance to show your stuff.

The goal is to find a group that can shine no matter what they play. The reward is — vast. Hard to quantify. A career on a platter, if the young winners can handle it. The $25,000 first prize is nice, but the solid year of touring in more than 40 North American and European venues is nicer still. And this year for the first time, there was a new prize: a two-year residency at Southern Methodist University in Dallas. String quartets often take up residencies at universities, the better to teach younger musicians while continuing to learn from older. And to have a life, which is harder to do if you never stop touring. Now the Banff championship would come with its own residency.

But for whom? For the final round, you had to play a quartet by Beethoven, a pretty obvious ultimate test for any musician. Of the three finalist quartets, one was skilled but nondescript. The other two seemed like rebuttals of each other’s style.

Britain’s Marmen Quartet, named for its corn-blond first violinist Johannes Marmen, was cool and deliberate, its members often understated in their delivery but also visibly touched by the beauty of the music unfurling under their fingers. Earlier in the week I’d put an asterisk next to the name of the group’s tall and bearded Welsh cellist, Steffan Morris, as elegant and responsive as any young musician I’ve heard.

The Viano Quartet, from the Colburn School in Los Angeles, was made up of two Vancouverites and two Americans. They couldn’t be more than a couple of years younger than the other groups, but they came off bright, excited, all primary colours and gleeful virtuosity.

The Viano make a show of dedicated egalitarianism. The group’s fabulously geeky name advertises their desire to play their assorted instruments that start with a “v” — two violins, viola, violoncello — with all the unity of a piano. Violinists Lucy Wang and Hao Zhou took turns playing the first-violin part all week, a rare but not unprecedented show of refusing to establish a hierarchy between the two violinists.

But there is nothing any of them can do about the fact that Zhou, 22, is a howitzer, an astonishing virtuoso with a bright, hard instrumental tone and an unpretentious physical exuberance that makes it hard to look at anything else while he’s playing. This spring he won the Concours international musical de Montréal, an international competition for violin soloists. He’s going to be a star. To some extent the question of the week was whether he could fit in with his colleagues without letting them harsh his buzz. 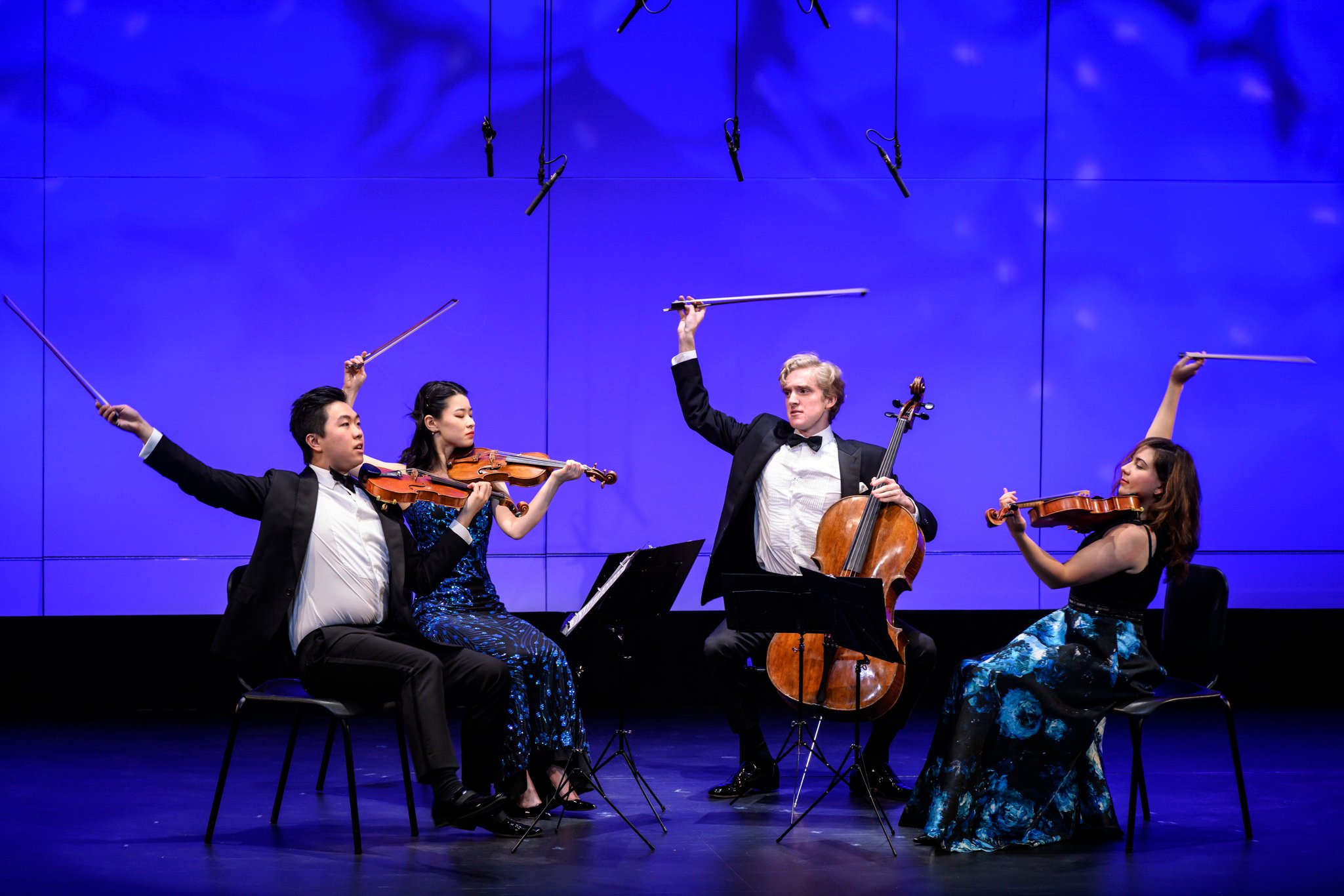 “There’s no other combination of instruments, strangely, that has the range of possibilities that two violins, a viola and a cello have,” Shiffman said in an interview. That’s counterintuitive. Quartets rehearse obsessively. They put great energy into phrasing together, attacking notes the same way, keeping their instrumental tones compatible. They manage personality differences with a peculiar intimacy couples or families would find familiar. And if they don’t manage differences, they don’t last.

But anyone who’s heard two string quartets on the same day knows any good quartet has its own personality, stately or racy, mannered or irreverent. Shiffman said there’s something about them that’s like sports cars, and it’s true, but part of the point of sports cars is that a Mustang isn’t much like a Jaguar.

If it seems odd that this modernist campus in a national park in the Rocky Mountains is a world headquarters for a musical form that was codified in Central Europe in the mid-18th Century, then that’s just the Banff Centre for Arts and Creativity doing what it does. Founded in 1933 as a theatre school, it has grown into an accredited post-secondary institution that spends $70 million a year helping artists do their thing.

There are many things. It’s kind of a glorious jumble up here in the mountains. The jazz program, once run by Oscar Peterson and later by figures as important as Dave Holland, Steve Coleman and Dave Douglas, is the country’s—perhaps the continent’s—leading finishing school for young jazz musicians.

This year’s literary journalism program wrapped up shortly before BISQC. Its director in recent years was Susan Orlean, the veteran New Yorker feature writer who was portrayed in the movie Adaptation by Meryl Streep. Stories from the Banff literary journalism program won National Newspaper Awards like clockwork over the years, until a rule change made it harder for such intensively workshopped features to be entered.

Journalists come to the mountains with drafts of long feature articles, read them aloud, critique one another in good grace, retreat to cabins in the woods to work on new drafts.  There are isolated practice cabins for musicians as well, and signs all over the campus warning about bears and elk. Sometimes it can be hard to tell where the wildlife stops and the wild life starts.

Banff has a playwrights’ lab, a sound mixing workshop, a “puppet theatre intensive” run by Peter Balkwill of Calgary’s Old Trout Puppet Workshop. There’s a literary translation centre and a growing cluster of Indigenous arts and crafts. An Opera in the 21st Century initiative will send a version of Puccini’s La Bohème, directed by Joel Ivany of Toronto’s Against the Grain Theatre, on a tour of bars and taverns this autumn.

Even amid all this, the BISQC is important for the Banff Centre because it’s so unabashedly audience-facing. A lot of what goes on here is for practitioners only. It’s a place for them to try new things, to rehearse, overhaul, maybe abandon flawed but promising productions. To screw up without fear. There’s a constant tension between the Banff Centre’s artist-development role and its public mandate. The centre’s management needs finished and crowd-pleasing shows, to justify its existence for governments and for philanthropic donors who are concentrated in Calgary. Some of its faculty and students are at Banff precisely because their stuff isn’t ready for audiences yet.

So it’s with relish and a hint of relief that the Banff Centre throws itself into such a crowd-pleasing event as the string quartet competition every three years. The 950-seat Eric Harvie Theatre sells out for most of the week. The event’s core audience — retirees, empty nesters, amateur musicians or parents of musicians — rents dorm rooms and meal plans, attends more than a dozen concerts and auxiliary lectures and demonstrations, debates the merits of the participating quartets late into the night at the centre’s Maclab bistro.

A rough consensus among musicians holds that competition for financial prizes is not the purest or most exalted way to pursue musical goals, but it’s not wholly bogus either. The repertoire any serious musician needs to know is immense. Thousands of pages of music from 300 years of lore. And you can’t sort-of play it either. If you know you have a competition coming up, it helps keep your concentration and endurance up. A competent jury can’t be snowed by performances that aren’t truly musical. This year’s jury was stellar, with members from the genre’s most pedigreed ensembles, including the Emerson, Kronos, Tokyo and New Zealand Quartets.

It was hardly clear how they were supposed to choose on Sunday. Viano, the young West Coasters, played Beethoven’s Quartet No. 9, the third of three he wrote in 1806 for the Russian ambassador to Vienna, Count Andreas Razumovsky. It’s the work of a 35-year-old at the top of his game, blustering and exuberant. Beethoven might as well have written its last movement for Hao Zhou. It’s a fugue at horserace tempo, long lines jetting in and out among the four instruments for more than five minutes, nearly ending a half-dozen times before darting off again. The music challenges every player, but the starring role goes to the first violin. Zhou chewed the scenery like a champ. The audience roared.

The Marmen Quartet chose a work from 20 years later, Beethoven’s Quartet No. 14, or Opus 131. It’s nearly the last thing Beethoven wrote, at 56, stone deaf but free of the expectations that defined lesser composers’ work. It’s a third longer than the piece the Viano chose, seven movements where most quartets have four. Nowhere flashy. More of a reverie than a race. It’s cocky for young musicians to play it, precisely because it gives them no chance to sound cocky. It leaves a quartet all kinds of room to stumble. Once or twice the Marmen misstepped or seemed bewildered by the scale of what they were attempting. But mostly they were letting the audience in on a secret of terrible beauty.

Three hours passed before the jury came out, and the three finalist quartets, and Shiffman, all arrayed on the stage. Shiffman finally admitted the jury couldn’t decide between the Viano and the Marmen. For the first time in the competition’s 36-year history there was a tie for first place.

The two quartets will split the prize money, sweetened by the $8,000 that would have gone to a third-place winner. They’ll divide up the tour dates, although most venues will be happy to hire them both. They’ll share the residency at Southern Methodist University, and another extended visit to Stanford that Shiffman’s old band, the St. Lawrence String Quartet, offered to the winners out of nowhere. Fortune favours the bold, as anyone who ever took a cello and three friends into the mountains to play Schubert among the elk could tell you.