Kim Gordon: More than just a 'Girl In A Band'

With Sonic Youth now disbanded, the visual artist discusses her new memoir, cultural appropriation, and why 'Sex and the City' is hilarious 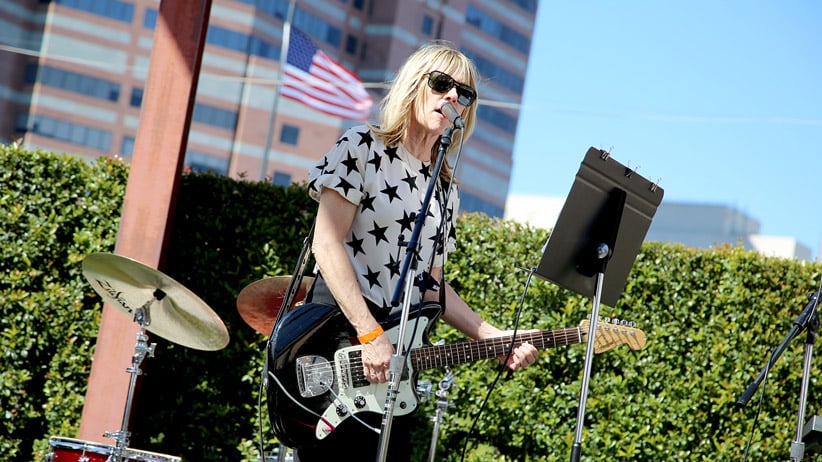 Kim Gordon at the Geffen Contemporary At MOCA on March 30, 2014 in Los Angeles, California.

To many indie rock fans, Kim Gordon was seen as Sonic Youth’s most pivotal member. Her background as a visual artist and connection with the art world—she once worked for the Gagosian family—created a bridge that encouraged the kind of experimentation Sonic Youth became famous for in the 90s as well as throughout the band’s 15-album lifespan. Also known as the woman who helped Hole launch their career (she produced the rocker’s debut disc of 1991, Pretty On The Inside), Gordon’s collaborations with stylist Daisy von Furth (a stylist she founded her successful X-Girl fashion line with) and Julia Cafritz (a member of Pussy Riot she worked with, on a musical collective called Free Kitty) have helped given her a kind of icon status among alternative rock fans and art students.

In 2011, when Sonic Youth split up—in the wake of Gordon’s divorce with the band’s frontman, Thurston Moore—she started to refocus her life. Part of that transformation was forming a new group called Body/Head, and writing her memoir, Girl In A Band, which will be on shelves February 24. Here, she speaks candidly with Elio Iannacci on a number of people and locales, both past and present, that she observes in her new book.

Q: More so than your divorce with Thurston Moore and the split with Sonic Youth, I found your separation from New York City to be heartbreaking. You said that the New York you and Sonic Youth grew up in no longer exists. What has replaced it?

It’s more commercial, more clean-cut. It’s more of a real-estate mecca kind of capital. Tons of condo development … not enough art. It’s mostly being sold to people who live in Europe … so they don’t add to the art community in New York. Parks are everywhere! In the middle of a street, suddenly there’s a Garden of Eden.

Q: One of the things you said in this book as well is that you stared at images, early on, of Joni Mitchell and Marianne Faithfull, wanting to be like them. What was different about how they presented themselves that strayed from the norm?

I don’t think that they were that different. I just think they were cool versions of what was happening. The way they dressed. With Joni Mitchell, I just liked her melodies and how she was singing about herself as a woman, being vulnerable. She was in this men’s music club scene on her own, having an adventure. She wasn’t married, having kids. She chose to be a musician. That was something that, previously, mostly men did.  Around the time Neil Young had that song, A Man Needs A Maid…

Q: Did that backward mentality change with your generation?

A little bit. I think there’s still rock-star syndrome, where men are being arrested for beating their girlfriends. A lot of the bad-boy image is hard to shake. There is something about being a rock star that makes men and women feel like they don’t have responsibility. You have people taking care of you all the time. That still goes on. But there’s a whole generation of younger men that are influenced by female icons. It’s weird and interesting.

Q: The book touches on how you felt your mom wanted more out of life than raising kids—that she too wanted an artistic outlet of some sort. Did you ever talk to her about how you may have fulfilled those things by your achievements?

That’s a conversation that would have been interesting to have. She was very supportive. My father was too, so it wasn’t something specific to her. They were just supportive of my creative endeavours. Their generation was about security and being responsible…ours wasn’t.

Q: You wrote about how hilarious it is that Sex & the City imported a drag queen sensibility to middle America. Why do you think this happened?

When my daughter was home over the holidays, we were watching reruns of Sex & the City and it just seems to get funnier the older it is. Thing are so camp! Everything about it is. I think Patricia Field’s styling is almost like another character in the movie. It keeps the humour from getting stale.

I don’t think she entirely understood that.

Q: You also wrote about artist Julian Schnabel. You called him “the very symbol of a spinning tornado of commercialization.”  Why?

In the early 80’s, there was money on Wall Street. Their markets started exploding. Artists like him became rock stars. Somehow it became okay to be indulgent. Instead of the starving artist image or being in it for the art…he was doing huge work. These were huge paintings for more value and money and big houses and apartments. Pricing his paintings [would be] often based on square inches.

Q: The way you wrote about the ’80s—you called the decade “an era of appropriation without consequence”—doesn’t seem that far off to today. Is it?

Back then, even in rap music, you could certainly get away with a lot more. Today, appropriation is more indirect—it influences people in a way that they are not even aware of. That’s because of the Internet. Now there’s the whole [issue] with how things exist on the Internet and the copyright issues of all that. Artists can appropriate something but it’s a different thing if they’re shooting a documentary or if it’s on YouTube. In the ’80s, it was so direct.

Q: You said you were reading Julia Kristeva’s writing on the male gaze when you were creating songs like Shaking Hell. Did any of her ideas or writing make it into any other songs you were doing?

She’s an overall influence on a lot of what I do. There’s a song named Actress on my new project—a band called Body/Head that’s all about that.

Q: In the essay about trash, drugs, and male bonding, you say they unlocked the next 30 years of your life. How so?

Well, it was the first piece of writing I did in the art world that reflected my future. It was for a small art magazine.

Q: The Manson family murders are mentioned quite a bit in this book. Tell me about what it was like to be a teen growing up with this story so close to home.

It was scary. We did all hitchhike so that made things worse. When you got in a car, you never knew who it was going to be. You might have to jump out right away. That was my reality. It was odd to have that happen, but that’s how we lived. There were a lot of eccentric people in the ’60’s that were taking a lot of acid and talking about weird things all the time. There was a cult atmosphere around. People were trying to get you to chant. There were communes. I knew about them and knew what was going on. There was a little bit of myth-making. It felt very rock-n’-roll. I had this close friend in high school who was one of those kids who believed that Manson was innocent and claimed it was a conspiracy theory. He was one of those people who put an X on his forehead and stood outside the courthouse.

Q: You also talked about your issues with Lana Del Rey and people like her who don’t embrace feminism—

I’ve been wanting to change that—the version of the book you have has been changed. I’m more [concerned] about the persona and if it’s really her. It’s interesting that she’s using self-destruction as a marketing tool.

Q: Artforum magazine has called her one of the most progressive and queer pop artists out there.

Q: Karen Carpenter’s tragic life gets a few mentions in the book as well. Why were you so compelled to write a letter to her, and why is she still in your thoughts?

Her voice was just beautiful and sexy. She would make these songs out of words that other people wrote and make you feel like she lived that. She also represents an idea.  Many women feel like a lot of the control they have is over their bodies. You don’t have to be anorexic; there are other kinds of body dysmorphia. For her, she obviously felt really controlled by other people. She so wanted to please. I think that’s something that a lot of women [feel]. When I was doing dance choreography, I wanted to challenge people with my work and ensure that body type didn’t matter.

Q: Did you ever fall into that trap?

Sure! I still want to please. It’s hard for me to battle.  Even when it comes to making art and thinking “no, this is for me, this is what I want,” or asking the simple question like, “what am I going to get out of it?”

Q: You wrote about girl power origins and how the Riot Grrrl started it all. When the Spice Girls co-opted the notion, do you feel they did more damage than good?

The people who are going to learn now about Riot Grrrl and what girl power really means are going to know that it wasn’t from them. I don’t think anyone really remembers the Spice Girls, frankly. I don’t think they matter. I think the riot grrrl movement and that history and the people involved with it will endure.