Thanks to a high-quality camera, the insect world is in clearer focus than ever before 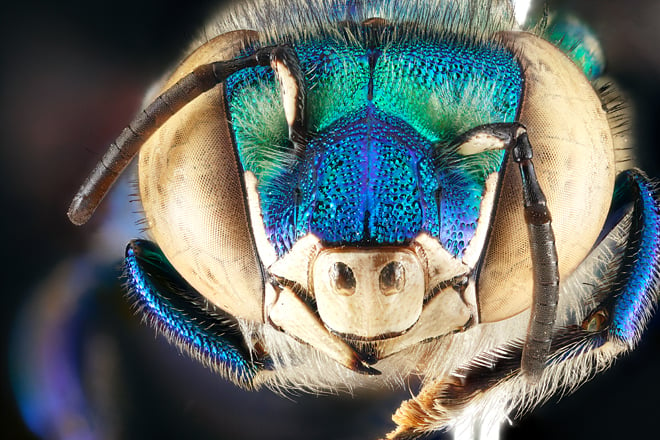 There are roughly 4,000 species of bee in North America, says biologist Sam Droege, head of the U.S. Geological Survey’s Bee Inventory and Monitoring Lab, but about 400 of them don’t even have a name. “Their fundamental taxonomy is lacking,” he says. By photographing bees and other insects, Droege’s team hopes to create a resource that will help identify species—and, as a bonus, to give the public an up-close look at these tiny beasts, mysterious to most of us. “We see them all the time under the microscope,” Droege says. “But most people don’t know what these bugs really look like.” That’s why they’ve posted their photos to Flickr.

Droege or a colleague install their subject in the “studio”—an inverted Styrofoam cooler—in front of a piece of black felt. The bugs, which are dead, are held in place with a pin to make sure they’re perfectly still. “Any movement, and the shot would be ruined,” Droege says. “Even wind blowing the antennae” can cause the image to blur. Droege’s team uses a Canon with a high-quality macro lens to capture dozens of shots of their tiny models, which are then pieced together on the computer. “Only a fraction of an insect is in focus in any one picture,” he says. “The software combines all those pictures into one.” The pin and any stray bits of dirt clinging to the bug are Photoshopped away. (Bugs tend to be dusty, Droege says.)

It’s more important than ever that we understand bees and their ilk. About one in three mouthfuls of the food we eat comes thanks to pollination, according to the U.S. Department of Agriculture, yet honey bees are disappearing. We don’t know exactly what’s causing colony collapse disorder, but it’s a huge problem: in the U.S., the total number of managed honey bee colonies has dropped from five million in the 1940s to half that today. “We’re trying to figure out how the bees are doing,” Droege says—not the honey bees, but native bees, which are also responsible for pollination, but remain far less understood. His team is taking a survey to create a more complete picture of their numbers. “Honey is great, but it’s not required to keep the world spinning on its axis,” he says. “Pollination is.”