Loretta Lynn: The queen of country music on 55 years in the biz

Country legend Loretta Lynn on what she learned from Patsy Cline, why she’s not a feminist, and whom she wants for president 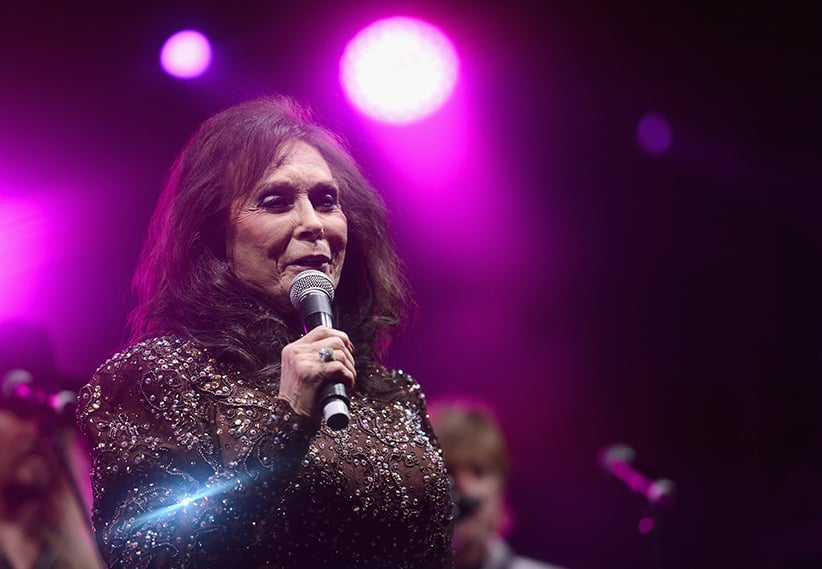 Dubbed the “Queen of Country Music,” Loretta Lynn has had a half-century-long career with more than its share of controversy. Her songs have been panned, and banned, for being too radical for the times. Her treasured 1976 autobiography, Coal Miner’s Daughter—named after an early hit—inspired a 1980 biopic that won Sissy Spacek an Oscar. And her rags-to-riches, backwater-to-Hollywood story apparently still has legs. Broadway has announced it will produce a musical adaptation of Coal Miner’s Daughter. A new disc, Full Circle—her first album of new recordings in 12 years—will be released on March 4. From her home in Hurricane Mills, Tenn., Lynn opened up about the troubles and the triumphs that animate her music.

Q: You once said you never needed a therapist because your songs solved your problems. Was Fist City your shot at anger management?

A: Oh yeah. It’s important that you take care of yourself and blow off steam in the right way. Don’t let some woman walk in and say, “hey, goodbye!” and take your man. Kill her if you can! I’m only kidding. But if I found out some gal was trying to steal my guy, I’d want to give her a black eye! Instead, I wrote this song. At the time I was writing each song [on this album], you could figure out the frame of mind I was in by listening closely. With every song I’ve ever recorded, I’m in it. I wouldn’t write about it if I wasn’t in it.

Q: At the beginning of your career, you worked nearly 300 days a year.

A: It felt like it was 365! I’ll bet you that at one point, I wasn’t home for two days in a whole week. I had my twins right in the middle of when I was starting to sing. I figured my career was over when I got pregnant. But I hung on and hit the road.

Q: Your daughter, Peggy Lynn, said she learned by watching you. What do you hope she learned?

A: The reality of being a country music singer. Patsy Cline—she’s a better singer than me—gave me all the advice I needed. I had my children with me quite a bit on tour because of her. I saw how much she’d miss her babies. I’d try to take mine on the road and let them know that this is a hard life for a singer to go through when you have kids. I preached it and they saw it.

Q: You once said, “If I slow down, people will forget me.” Do you still have that same fear?

A: If I had slowed down at that time, they would have forgotten me! They wouldn’t now. I changed my mind about that notion about 15 years ago. When I lost my husband [Oliver “Doolittle” Lynn], I just didn’t want to work so hard anymore. I hate that I didn’t quit things a lot more before he was gone. I stayed home for six years to take care of him but, at some point, I also felt I had to go back to work.

Q: How did you and Doolittle end up together for so long? He drank and you were on the road so much. There was no Skype, no cellphones.

A: I could call home from the hotel or motel room. If it was late, I wouldn’t call because he was a farmer. He got up with the chickens and went to bed with the chickens so it was really hard. I worked just as hard every night, too. Most of the time it’d be two shows a night so I’d be too tired to talk. It was rough.

Q: Did writing help you stay in love with him?

A: Of course. A lot of my songs are about getting mad at Doo—or caring for him. You gotta stay in love! Me and Doo were married for 59 years. I had no choice. I got married at 14 in January and when I was 15 in April, I had a baby coming. You know what? I still think about what Doo would say about things in my career if he’d still be living.

Q: Did you ever feel you got married too early?

A: Oh, sure. I know I did. It was hard to back out of something—especially when you’re pregnant. Getting out of Butcher Hollow was also something I just had to do. Now they’ve got a paved highway up there—did you know they paved the highway this year? I’d die happy if they named it after me.

Q: When you first started, your manager and your husband tried to force you to wear high heels. How did that work out for them?

A: It didn’t, God’s honest truth! I was wearing white cowboy boots with my little dresses. Then they locked my boots in the trunk of the car and gave me heels. I was up all night in the hotel, trying to walk. I fell three or four times. But I showed them. I got onstage and went over to the microphone and yanked those shoes right off! I said, “I hope y’all don’t mind. If you want me to sing, I’ll sing, or I’ll put my heels on and just stand here. I can’t do both!”

Q: What do you think of country artists worrying about dressing for the red carpet?

A: I hate that. Now, all you’re getting is the looks and no soul 99 per cent of the time. That’s why things are how they are. How many girls out there are big in country music? You can count them on your hand, can’t you? There’s Miranda Lambert. I love Miranda.

Q: Many country songs are about the joys of drinking. Yours don’t seem to be.

A: I didn’t glamorize drinking then and I won’t glamorize it today. I thought about this when I was writing: the women sitting at home listening to the radio when their old man’s out drinking. I wanted their point of view.

Q: Did you feel a responsibility to sing for women in troubled relationships?

A: Yeah. I was conscious of it. I knew there were other women out there like me.

Q: When people called you the female Hank Williams was it a compliment, or condescending?

A: I felt like Hank Williams! He was living his truth too. I’m sure he was compared to someone who was living and writing the same way all us singers do.

Q: You had the shockingly frank Wings Upon Your Horns banned from radio stations.

A: It was a good song. Every time a disc jockey would say, “I don’t play that record, it’s no good,” I would say, “That’s your problem. If you want people to listen to your show, you better start playing it!” because it’s a hit. I’d get ’em good. I paid them no mind because I had been blessed. A preacher came to me at one of my shows. He came to the dressing room and said, “I’ve come by to tell you Wings Upon Your Horns is one of the greatest things you’ve written. I bought it for my 15-year-old daughter—to teach her about men.”

Q: Many people consider songs such as The Pill to be feminist anthems. Do you?

A: No, I really don’t. I go around in my blue jeans all day long, but when I hit the stage, I’m in a gown. Back before I could afford the gowns, I was in really short dresses. I could [be a feminist], but I’m not very much of one. When The Pill came out, people would tell me, “They’ll never play that record—that day will never come.” I said, “You watch it. It’s coming.” It came.

Q: You’ve said you want to live to see a female president.

A: Wouldn’t that be good?

Q: Are you thinking of supporting Hillary?

A: No. I’m supporting Trump.

Q: What about his putting up walls around the U.S.?

A: He isn’t going to put up a wall. As rich as Trump is, he couldn’t do that. That’s crazy. He’s just blowing air and being a performer. You have to know where Donald stops. He’s the only one who can turn this country around.

Q: Songs like Who Says God Is Dead question ideas people have about religion.

A: I don’t know why I got into these morbid zones. This was back in the ’60s. Who Says was written right after I heard somebody on the radio saying God had passed away. The lines—“He’s talking to me right now / He’s reaching for me now”—came pouring out of me like an answer to that question. I haven’t been to church in a long time but everything I look at inspires me. God is in everything.

Q: What are your best vocal performances on this album?

A: You’re going to get shot, because I love them all! There are songs that Mommy sang to me, like In the Pines. Mommy set me up on her own song machine with a little paper dress that she made and I followed every line she sang. That’s where she taught me how to sing.

Q: In he early days, between singing, you cooked for 26 farm workers, cleaned houses and picked berries.

A: It was 36 ranch hands! When I started singing, they gave me $5 every Saturday night. I thought I was going to get rich!

A: It’s the stupidest thing I’ve ever done. After Doo had been gone for a year, I went to the store. I bought a mink coat that hit the floor and I had a hat to match it. I’ve never worn it. I have a big room for storage. It’s been in there for 20 years.

Q: It sounds like you are satisfied with your music.

A: I am satisfied when it’s just me and my guitar. There’s nothing like it.

Q: Do you feel you’ve made enough of a mark?

A: Now I do. It took a long time to feel that way, that’s for sure. I’ve been in the business 55 years. It sunk in slow that people still wanted me around. I’d be going down the highway listening to the radio, and I’d hear, “There she is, Loretta Lynn,” after one of my songs came on and I’d think, “Gosh darn, this happened 50 years ago!” and they still remember!