On Beyoncé's 'Lemonade', the personal is political

'Lemonade,' Beyoncé's scorned-lover LP, is made more interesting by its accompanying film—revealing how personal traumas can be political statements 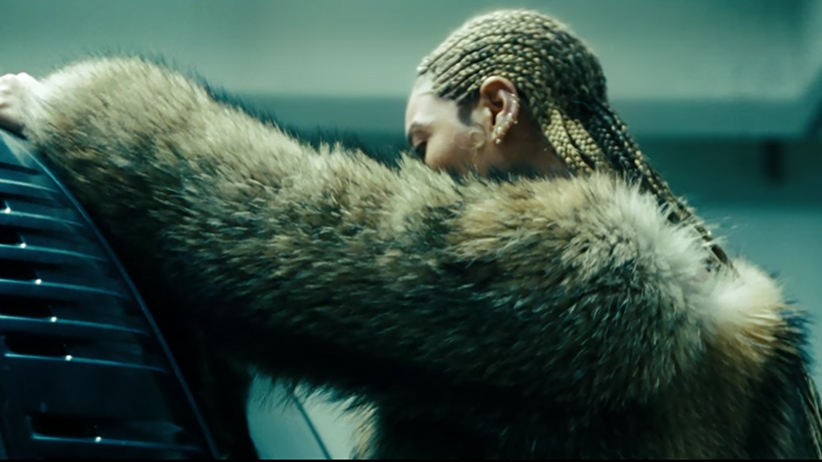 A still from Beyonce’s Lemonade. (HBO)

Like a lightning bolt shearing the air, Beyoncé Knowles’s last album—a self-titled surprise in the waning wintry days of 2013—was the kind of capital-M Moment that some feared music releases weren’t able to create anymore. With record sales continuing their decline and existential questions about the value of an album as a unit of music delivery, the galvanizing Beyoncé, complete with a parcel of complementary music videos, was inhaled at once, an unmissable meteor crashing onto the cultural landscape.

Three years later, we have Lemonade—her much-anticipated sixth studio album, available on Tidal, ruining Saturday night plans with its abrupt appearance after an announced HBO special. But what is most surprising about Lemonade wasn’t so much its sudden existence—the world has grown somewhat accustomed to the notion of the surprise album in the years since Beyoncé perfected it, and had been watching her with bated breath to see if a product release or hair flip would trigger new music—but its content. She had, after all, stormed the Super Bowl halftime stage with the new song “Formation,” a clear anthem steeped in Creole twang and watchwords of blackness, a song she performed to millions with Black Panther dancers backing her up. It was easy to presume that the album would represent another kind of cultural moment: a dive into this mostly unseen aspect of the world’s most famous black woman. Many had been calling for Beyoncé to be more openly political in her songwriting and actions—this, though, in spite of her work bailing out protesters in Baltimore after the death of Freddie Gray, and her open embrace of feminism.

But a political statement isn’t really what Lemonade is—at least on its surface. In fact, “Formation” is tacked onto the album’s end, feeling more like a bonus track. Instead, Lemonade is a look at a woman who discovers infidelity, who refuses to brook the betrayal and romps around with righteous revenge, but just before giving into Medea impulses, decides to stay. Listeners wouldn’t be blamed for linking this to rumours of marital tensions between Beyoncé and her rapper husband, Jay Z. But if Beyoncé expressed the crystallizing of lust into love—which, indeed, the pair were drunk in—Lemonade reveals what it’s like for that love to turn to rust. 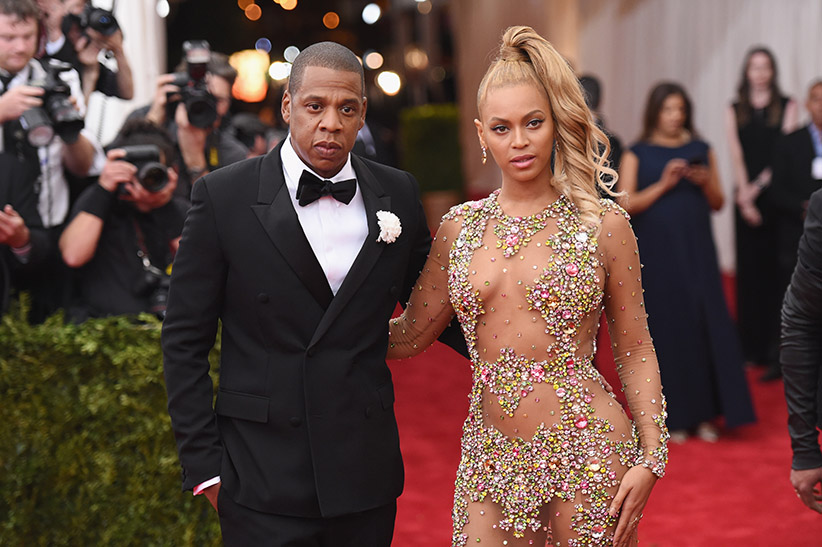 Jay Z (L) and Beyonce attend the “China: Through The Looking Glass” Costume Institute Benefit Gala at the Metropolitan Museum of Art on May 4, 2015 in New York City. (Mike Coppola/Getty Images)

This alone is interesting. Beyoncé has rarely been rawer than in Lemonade‘s first half, best expressed in the gleeful rock fury of the Jack White-assisted “Don’t Hurt Yourself,” nor more vulnerable than in its second half, capped off by the stunner “Sandcastles,” where she allows her honed voice to head toward reconciliation while still crackling with anger. It’s a growth of the caution and paranoia we first heard on Beyoncé tracks “Mine” and “Jealous”; this album is the brazen humanization of Beyoncé, the realization that even someone as powerful, beautiful and indeed flawless as her can endure marital strife, and be embittered and bruised. “Nine times out of ten I’m in my feelings, but ten times out of nine I’m only human,” she sings on “Love Drought,” a rare confession from Queen Bey.

The appearance of celebrities’ perfection has always been groomed; look no further than Golden Age Hollywood’s studio-fabricated relationships. It isn’t, of course, believable. Love isn’t stainless and sterile scientific metal; it’s rough-hewn work and crafted compromise and a little bit of magic. It’s the alchemy of transforming lemons into lemonade, of turning nothing into something. The love on Lemonade has rusted, to be sure. But shake off that rust, and you can still uncover steel. This album is that human struggle, writ huge.

But while the album is surely her most personal to date, it’s also her most political—if you know where to look. 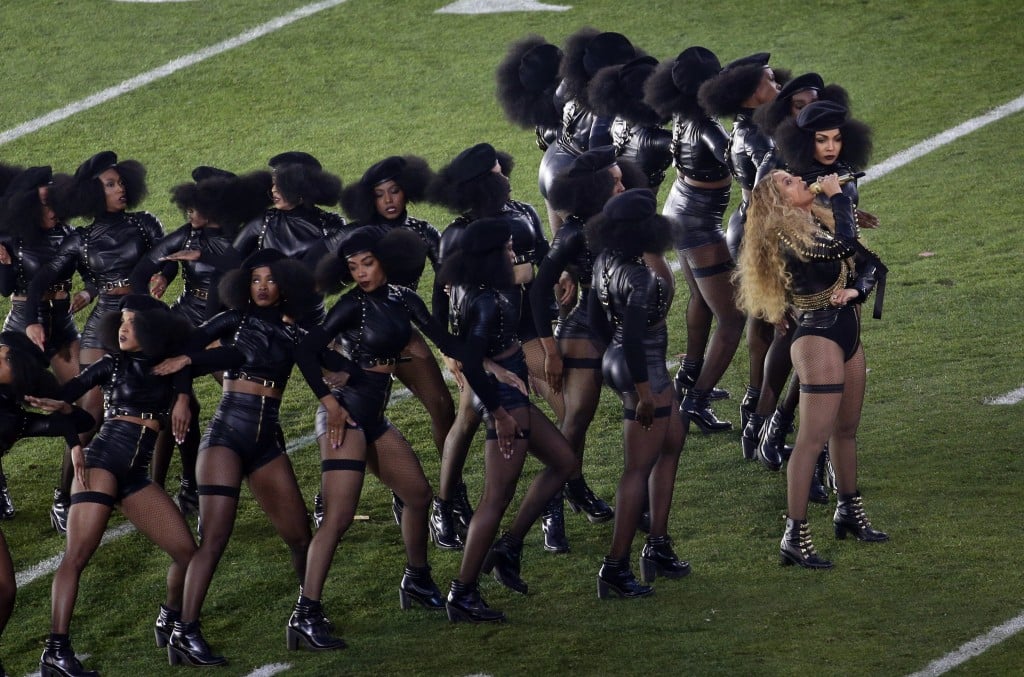 Like Beyoncé, Lemonade came with a “visual album,” a film that accompanied the release. But Beyoncé‘s videos were standalone confections, more a compilation of music videos than a filmic narrative. In contrast, Lemonade is a swirling 56-minute stunner stitching together influences of antebellum South, Delta spirituality and a haunting kind of Afro-occultism that makes an otherwise strong album into merely a primary source, mixing and flipping sections of songs in different orders, and tying together the tracks with spoken-word poems by Warsan Shire.

It is in these differences where the long-awaited political Beyoncé emerges.

On the album, “Daddy Lessons” is a delicious joyride, a balloon of New Orleans second-line horns and country-music plucking that delivers on the sonic promise of her Alabama father and Louisiana mother. In the film, surrounded by footage of her own dad, it becomes an argument for tying infidelity to generational lineages of fathers and husbands, of a vice borne in men. “Am I talking about your husband, or your father?” she asks rhetorically about the pain and joy both kinds of men can engender.

The merits of this thinking are debatable, especially given the long-held stereotype of absentee black fathers—one that’s been challenged in recent years. But here, the personal is political; Beyoncé’s own father, Mathew, cheated on her mother, Tina. And it’s possible, here, that cheating is a narrative tool: in the absence of untrustworthy men, black or otherwise, the question becomes: who can a disrespected black woman trust? 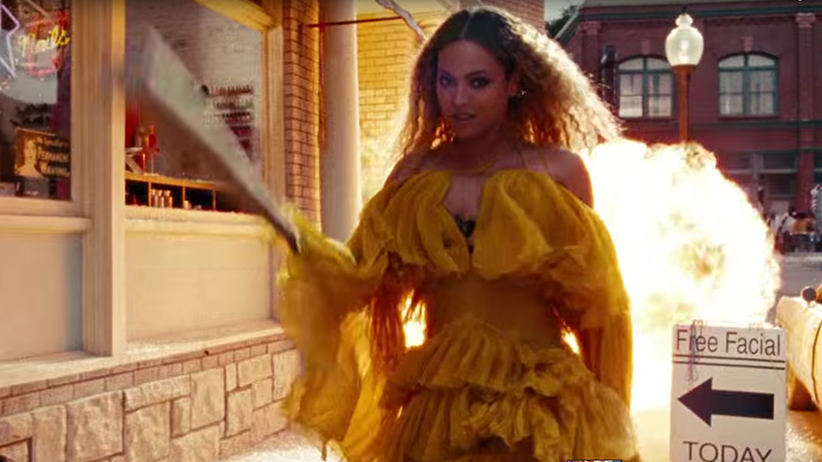 A still from Beyonce’s Lemonade. (HBO)

Indeed, after incantations of cinnamon and cloves and Bible-stuffed menses, the film offers up “Forward”—a song that, on the album, speaks to pushing ahead toward personal reconciliation. In the film, it’s more than that; it’s juxtaposed with women grappling with grief—the mothers of Mike Brown and Trayvon Martin, draped in black and holding images of their sons but looking straight forward. Then, images of young black women, standing resolute. The generational strength of these women is why she moves forward, and it’s what gives her strength.

And so when the voice of Hattie White, her grandmother-in-law, appears on the next song, “Freedom”—a militant triumph from beatmaker Just Blaze, who just happens to be the producer whose best work helped make her husband famous—it is proof of the power of generations of women. “I had my ups and downs, but I always find the inner strength to pull myself up,” White says. “I was served lemons, but I made lemonade.”

On the album, this comes in the middle, and the listener reads this as reflecting Beyoncé’s desire for independence in her relationship. In the film, it comes near the end amid images of solemn black women and the recitation of Beyoncé’s grandmother’s recipe for lemonade, and those words become a coda, an explicit urging for black women to be inspired by each other to make freedom real.

So while the film is more explicitly political, and the musical album more explicitly personal, it’s the different choices made in making each that are most telling. If the musical album is about a woman’s personal resilience, the visual album is a more specific statement about a broader group—black women—and the ability to find resilience in yourself and your sisters, in the face of the conditions Malcolm X warned about. The two, juxtaposing and intermingling, makes the statement that the personal is in itself deeply political.

People of colour already know this: that in many ways, the act of simply being and choosing how people of colour live our lives is a political choice, in whether we choose to be activist or not. So is the musical album—which will be more widely consumed, but is less openly political—a sign of Beyoncé pulling her punches? Perhaps. But that’s her choice. And in what she’s chosen to reveal, Beyoncé—this immensely famous person who has pulled a thick veil over her life—shows us who she is, who her tribes are, and how she fits into them. By being more personal than ever before, Beyoncé is being political, too.