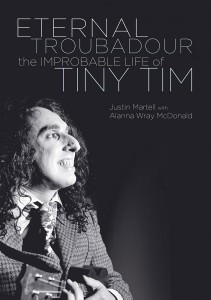 Gawky, unattractive and singularly odd, Tiny Tim was the unlikeliest of showbiz successes. Indeed, his time in the sun was extremely brief, spanning just a few years in the late 1960s and early ’70s. And yet he endured, often penniless, patching together a career that limped along for another quarter century. As CBS aptly observed at the time of his death in 1996, he found “fifteen minutes of fame that lasted a lifetime.” Now, two decades on, Justin Martell, surely the world’s foremost expert on all things Tiny Tim, shapes a reassessment so thorough that is stretches to more than 500 pages.

His research is as impeccable as it is exhaustive. Born Herbert Khaury in Manhattan to fervently Marxist parents, he was derided as early as childhood for his intentionally bizarre quixotism (at one point his mother tried to have him committed). But he persevered, determined to make it as a performer, inspired by such crooners as Rudy Vallee and Bing Crosby. Around age 18, he hit upon the idea of singing in what would become his trademark falsetto. Greenwich Village’s bohemian coffee houses proved fertile for his brand of eccentricity, ultimately leading to guest spots on the inaugural episode of Rowan & Martin’s Laugh-In and The Tonight Show. Warner Music took notice and paired him with top producer Richard Perry. The resultant God Bless Tiny Tim proved a massive hit, spawning Tim’s sole chart hit, his tinkling “Tiptoe Through the Tulips.”

Critics were equally enamoured. Life magazine heralded it “one of the most dazzling albums of programmed entertainment to come along since the Beatles introduced the new genre of pop with Sgt. Pepper’s Lonely Hearts Club Band.” John Lennon, Paul McCartney, Jim Morrison and Bob Dylan sang his praises. Pete Townshend considered him for the title role in Tommy. Joni Mitchell dubbed him “a true troubadour, singing to people of those things that have always concerned them.” Soon thereafter his career plummeted, and the book follows the indefatigable Tim’s multifarious attempts to regain fame, including forays into disco, country and heavy metal.

But Tiny Tim is as interesting today for what he represented as for the surprising depth of his musical talents. He was intensely spiritual, unapologetically chauvinistic and, most surprising, ultra-conservative. Though Martell documents a lengthy homosexual relationship in the ’50s, Tim insisted he was straight, marrying three times, most famously to Vicki Budinger on a much-ballyhooed 1969 Tonight Show broadcast that attracted 40-million viewers. Curiously, he was also a rabid Toronto Maple Leafs fan. So quirky a persona could only have blossomed, albeit briefly, in the free-for-all Sixties.

As Peter Yarrow notes, “his acceptance was part of opening the door to acceptance of people who were not like other people—they didn’t have to be marginalized.” He ushered the way for PeeWee Herman, Michael Jackson, Boy George, Alice Cooper, Queen and KISS. Was Tiny Tim ahead of his time? Would the openness of our postmillennial cultural milieu, embracive of Transparent, The Danish Girl and Caitlyn Jenner, acknowledge and encourage him, à la Lady Gaga, as more than a passing novelty? Martell doesn’t speculate, but it seems fair to presume that today’s audiences might agree with McCartney’s long-ago assessment about Tim: “It’s a funny joke at first; but it’s not really. It’s real and it’s true.”