One man's mission to put the tuba back where it belongs 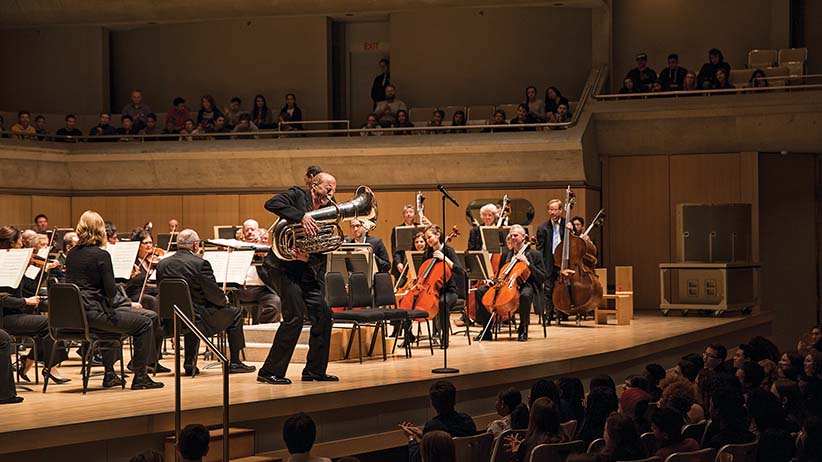 If you remember drive-in burger joints, you’ll remember the tune: an infectiously plump tuba beat that put the bounce into A&W’s roly-poly Great Root Bear mascot as he ambled down a country road. “Ba bump, ba bump / Bump ba bump ba bump-bump . . . ” First aired in 1976, the memorable television ad jingle may well be the most recognizable and beloved tuba solo of all time in Canada. No disrespect to your Mama Burger, but Øystein Baadsvik would like to change that.

Baadsvik is the only independent virtuoso tuba soloist in the world; he may be the greatest tuba player, period. And the Norwegian has spent his entire career pushing back against “instrument discrimination,” trying to hoist the tuba out of marching bands and the back rows of orchestras and put it where he thinks it belongs—at the front of the stage as a solo instrument to rival the violin. “Most people’s impression of the tuba is that it’s one of the dullest instruments on the planet,” says Baadsvik. “They see it going by in a parade and all it does is one thing: omph. I’m constantly fighting this idea of the tuba as an instrument for marching.” Despite plenty of personal success, however, his tuba rights movement is proving a long and difficult crusade.

Many gifted musicians earn their keep playing the tuba; Baadsvik is the only one to do so without the security of a permanent position at a school, symphony or professional brass band. To survive, he must constantly tour, teach and record. And that requires convincing audiences and musicians around the world the tuba deserves a place in the spotlight. Touring North America in 2015, he made stops in Houston and Washington, and came to Toronto to front a children’s concert with the Toronto Symphony Orchestra and lead a master class for university music students. He spends two weeks every summer teaching at the arts academy Le Domaine Forget in Charlevoix, Que.

To bolster his claim to front-of-stage presence, Baadsvik has demolished the conventional view of the tuba as a lumbering producer of solitary omphs. His invention of “lip-beat” uses a double-tonguing technique to produce a surprisingly urban beat-box sound. Fnugg, his signature composition, offers an unlikely but arresting aural amalgam of Norwegian folk music and an Australian didgeridoo, with a helicopter landing somewhere in the background. A breakneck 180-beats-per-minute version of Carnival of Venice inspired an episode of House, M.D. in which a tuba player named Tibalt Oyylant dies playing the impossibly fast piece.

For all Baadsvik’s skill and acclaim, however, his life’s work of winning the hearts and minds and ears of the music world to the notion that tubas deserve to play the melody remains a daunting and solitary task. “It is lonely,” he says, “I have no colleagues.” And he’s not sure he’s moved any mountains. Tubby the Tuba casts a large shadow. It is still the slightly goofy instrument played by the fat guy in the marching band. In orchestras, it’s the lowest of the low brass. Best heard but not seen.

“There remains a lot of instrument discrimination in the music industry,” says Baadsvik. “People get sensitive when you bring up the issue of civil rights.” But tuba players, he says, are “put into slots. We are forced to play a role that’s no different from being told to wear a banana skirt,” he gripes, referring to the ghetto of low-register pieces that emphasize the instrument’s rumbly reputation and form its standard repertoire. Many tuba players enable these low expectations, he argues, because they fail to push themselves to the same heights of clarity and musicality as those prima donna violinists.

“Early in my career, I considered myself a missionary,” Baadsvik says. “And for a long time, I was trying to keep up with the violins by playing as fast as I could. But now, I realize there’s little I can do to affect the general view of the tuba. All I can do is influence the people I perform for.” Cry freedom, Tubby.