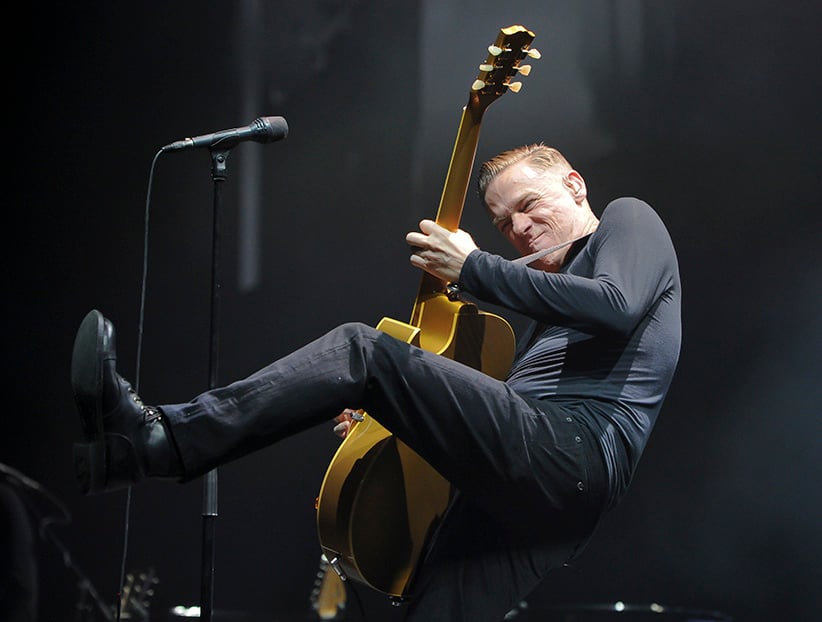 On his new song That’s Rock and Roll, Bryan Adams asks, “Do you want to start a revolution / Or do you just wanna have some fun?” The tension in that lyric, he says, “sums me up in a nutshell.” He’s the diplomat’s son who co-wrote the famine-relief single Tears Are Not Enough, was the first Western artist to play in Pakistan, and runs the philanthropic Bryan Adams Foundation—but he’s also the guy who quit high school in Vancouver to play party anthems in hockey arenas.

The fun factor has ebbed in recent years: Since his last album of originals, 2008’s trudging 11, he has mostly been looking back, with an acoustic live collection, a covers album of songs he listened to in his youth, and the 30th-anniversary edition of his commercial breakthrough, Reckless. The last time he spoke with Maclean’s, in 2012, he said, “I wish I could write the songs I wrote back when I was 22.” He smiles when he’s reminded of this, because, on his new album, Get Up, he has restarted that thing he’d stopped.

The album is as lean as the vegan Adams himself: No songs stretch past 3½ minutes, and it focuses simply on guitars, bass and drums. His raspy voice is in heroic form. For those who never warmed to his later cinematic ballads, Get Up is pretty much the Platonic ideal of a Bryan Adams album.

Adams says it’s the album he wishes he’d recorded 25 years ago. That takes us to 1990, when he was recording Waking Up the Neighbours, which sold 16 million copies and yielded the ubiquitous (Everything I Do) I Do it for You. So he’d rather have made Get Up? “Umm, maybe, yeah,” he says, coiled up on a couch in a Toronto hotel. “It’s very, very me.”

He believes he’s lucky to have come of age musically in the 1980s, when people bought records and his instrument of choice was de rigueur: “If you were to put any of these songs up against anything that plays at the MTV Awards, it would be like, ‘Wow, what’s this? Guitars?’ ” When he fits into the zeitgeist now, it’s accidental: “The record company actually said to me, ‘Please make sure that your record’s not longer than nine songs; people have short attention spans.’ I said, ‘That’s good, because that’s [how many] I’ve got!’ ”

While Adams can be guarded (“It’s pretty hard to be that analytical about oneself”), he warms up when he talks about others. He admits to being star-struck by Jeff Lynne—the Electric Light Orchestra frontman who worked on several Beatles solo albums—who produced Get Up (“He would say something like, ‘That sounds like an outtake from Rubber Soul.’ I just went, ‘Really?’ ”), and enthuses about the “fantastic” Helena Bonham Carter, who told him it was “like therapy” when, on the video for his single, Brand New Day, she playfully slapped around her co-star, Theo Hutchcraft, for “saying one thing but doing another.”

Meanwhile, Adams the revolutionary is aware that people have become more cynical about pop stars in the 30 years since Tears Are Not Enough. “Just doing a song because I can doesn’t mean that people will listen,” he says—but he retains hope for a younger generation: Justin Bieber, for instance, could make a charity anthem work. “It would be the right thing for him to do. It would be unexpected and brilliant.”

A self-declared “world citizen,” Adams recalls the gunshots he heard at night in Damascus, where he played in 2010, three months before the Syrian civil war broke out. Now living in London, he despairs of when he might return to the Middle East; he lived as a young boy in Israel in the early ’70s. “Devastating Iraq and undermining things in Libya,” he says, has helped the Arab Spring turn into the “Arab Hell. It would be great if Canada really opened its doors and made an extraordinary effort, as Germany is doing right now—not only just [for] the Syrians, but the Palestinians, as well.”

Somehow Adams escapes being pilloried when he makes such Bono-esque statements: It may be his youthful charm, or his allergy to pretense. Where many a middle-aged artist striving to keep relevant would resent being labelled a “classic rocker,” he simply laughs: “I don’t think I have any choice. I’m okay being anything.”