Imagine a cluster of dusty pink blooms, or crisp bundles of white rolling across a blue expanse, or reedy green wisps that criss-cross into the distance. Your mind might rush to picture any number of sprawling natural landscapes, but in artist Jon Sasaki’s new exhibition Homage—opening this May at the McMichael Canadian Art Collection in Kleinburg, Ont.—the scope of perspective is considerably smaller. The Toronto-based artist is exhibiting a new suite of photographs that features large-scale images of petri dishes, each blossoming with unique and colourful configurations of bacterial cultures (scroll down to seem them). While at first this body of work may seem out of place in a gallery known for its expansive collection of historic Canadian artworks, it’s worth taking a closer look: in order to produce each petri dish, Sasaki swabbed palettes, easels and other studio items used by the painters of the Group of Seven and Tom Thomson.

“It occurred to me that when the Group of Seven members were handling their tools to make paintings, they were simultaneously depositing small traces of their microbiomes; invisible microbes that lay dormant for decades,” Sasaki explains. Working with the team at the McMichael, the artist used sterile cotton swabs to source bacterial samples from painting tools used by members of the influential group of Canadian landscape painters, all stored in the gallery’s collection. Then, each sample was transferred to a petri dish in order to germinate. The dishes saw considerable activity in under a week, and when Sasaki felt each culture was at the peak of its growth, he photographed it in high resolution. “It was amazing to zoom into details that were too small for the naked eye to see, but when magnified became flourishing landscapes in their own right, teeming with life.”

Working at the beginning of the 20th century, the painters of the Group of Seven produced some of the most iconic representations of the Canadian landscape, using signature painting techniques that would shape the collective image of this country for generations. Engaging with their legacy is a large undertaking for any contemporary Canadian artist. “Working with the palettes felt both daunting and energizing,” Sasaki says. “Knowing they had been used to make some of the most influential landscape paintings in Canadian art, and knowing they had been touched by the hands of these iconic artists, certainly gave them an aura.”

As living, growing things, these bacterial cultures honour their historical subjects in a new way, one that remains open to the interpretation of each viewer. It’s not hard to envision billowing autumnal trees and snow-filled cloudy skies in each dish, and Sasaki describes how, despite their unpredictability, some images almost seemed to take on qualities of the painters whose tools they were sampled from. For instance, the photograph of Frederick Varley’s bacterial culture—which includes the aforementioned dusty-pink blobs—also features what looks like a lopsided smiley face in the bottom corner, “which seems somehow fitting as Varley was a very accomplished portraitist,” Sasaki points out. Meanwhile, “the J.E.H. MacDonald petri dish looks perfectly composed to me, and as spacey as a prog-rock album cover. I wish I could take credit for it, but when the microbes arranged themselves in such a photogenic way, it was purely the result of random chance.”

Sasaki began his artistic career as a landscape painter and now works primarily in photography, performance and installation art. Despite this shift in media, the paintings of the Group of Seven have remained a touchstone for his work. By growing new bacterial landscapes from these historic sources, Homage is a reminder—equally playful and reverent—that the past is never as static as it seems. Instead, these creative legacies are very much alive in our present, where they continue to grow and blossom in some unexpected ways. “Microorganisms like bacteria, fungi and viruses are probably not as emblematic as a jack pine,” says Sasaki, “but they nevertheless contribute greatly in shaping who we are as individuals and as a society.” 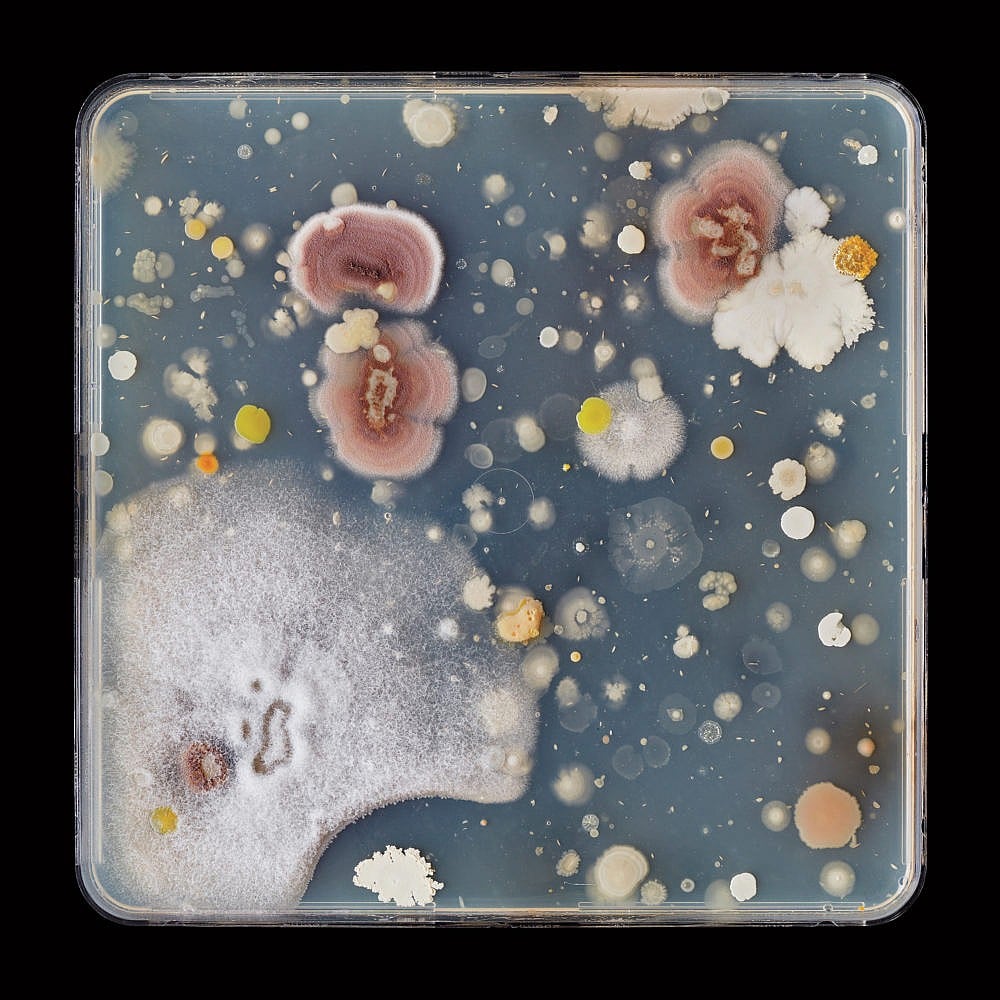